Home » The War For Kaleb Examines Anxiety with a Superpowered Metaphor 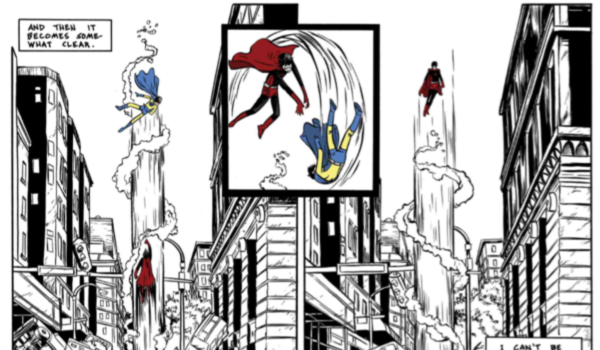 Anxiety disorders empower thought. A casual worry becomes a world consuming obsession, thoughts and ideas gain real, physical effects; tears, flushed skin, labored breathing and muscle spasms. To a sufferer of anxiety what you are thinking can become more important than the world around you. Knowing what to think can seem a matter of life and death. The War for Kaleb #1 conveys these crushing effects with an apt metaphor. By superimposing the titanic struggle of mental superheroes over Kaleb’s ordinary life, it allows the reader to experience the crushing effect that thought can have on an anxiety sufferer.

Writer and artist Jason Pittman portrays Kaleb’s struggle with anxiety tenderly and unsparingly. From our first introduction to Kaleb to the titanic subway battle between his light and dark mental heroes, Pittman is not afraid to show the ugliness that comes with intense mental distress. But it is all done in a fundamentally humane and measured way.

The War for Kaleb # 1 begins with a somewhat rambling monologue that presents the flowing, worrying nature of Kaleb’s thoughts. It overlays a charming New York City montage in which Kaleb has a chance subway encounter with Addison, a woman who later becomes his girlfriend. All the while, a yellow and blue clad hero watches him from afar, a symbol of his control over his anxiety and the power of his thoughts.

This scene is devoid of dialogue, except for the final encounter between Kaleb and his future girlfriend. It is a fitting representation for how the internal monologue of anxiety can drown out almost anything else. The War for Kaleb 1 continues in this vein, no huge events weigh on Kaleb, beyond the emotional demands of everyday life. Despite this, Pittman deftly shows the strain that parties, friendships, and his evolving relationship with Addison place on Kaleb. In unfamiliar territory, Kaleb debates when to tell Addison about his disorder, while confessing to his best friend Mike his anxieties about his own understanding of himself.

Perhaps the most cutting moment of the comic comes here. As Mike tries to persuade Kaleb to tell Addison about his problems with anxiety, he inadvertently contributes to Kaleb’s spiral. “Your disorder is who you are,” he says, before immediately correcting himself, “Christ. I’m sorry, I didn’t mean it like that.” This sentiment is exactly many anxious people fear, that we are our ailment, that medicating it away gets rid of some essential part of our identity. 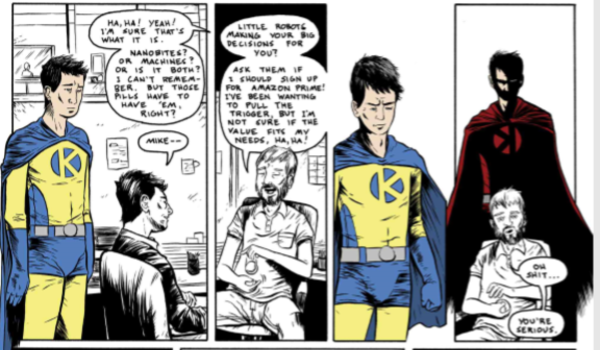 Startled by the accelerating pace of his relationship and anxious about his own feelings, Kaleb impulsively decides to go off medication in order to ascertain his “true” feelings. Concurrent to this, a new hero appears, a pale version of Kaleb, in a red and black costume. As his light and dark mental heroes quarrel and fight, Kaleb begins to suffer the effects of medication withdrawal, and obsesses about whether he truly loves Addison. This comes to a head with a confrontation on the subway, and a killer setup for the next issue.

The art of The War for Kaleb #1 is perfectly enmeshed with the story. Pitman has an emotive style, the faces of the characters are built at expressive angles, all just a little askew in a way that makes smiles pop and frowns envelop a whole face. He draws New York City in all its chaos and glory, it feels like another one of his detailed, slightly askew people. Each main character, from Addison to Kaleb’s hero to bearded best friend Mike feels and looks unique. Coloring only the superheroes is a masterful stroke. It impresses fully on the reader how thought can become more real than life to a sufferer of anxiety.

The War for Kaleb #1‘s problems are almost the necessary inverse of its strengths. The dialogue can ramble, and Kaleb’s internal monologue is sometimes hard to follow. But that rambling is fitting in the confused, racing head of an anxiety sufferer. This needed focus on Kaleb’s mental state means the other characters can get short shrift. We know very little about Addison and even less about Mike.

Kaleb too, doesn’t receive as much fleshing out as he deserves. His likes and dislikes, hobbies, passions and job are all overshadowed by the titanic power of anxious thought. This is, in its way, fitting. When you suffer from anxiety, the world outside your head can seem unreal, almost unnecessary. The worries that consume Kaleb are so powerful that they become more important then the reality they reflect. He is more concerned with knowing his own feelings about his girlfriend then with knowing her.

What problems The War for Kaleb #1 has are all addressable in future issues. Jason Pittman has done an incredible job of setting the stage for an exciting and moving story. He tells his tale masterfully on multiple levels, in story, metaphor and art. It perfectly captures the weight of anxiety.

You can discover more about The War for Kaleb from Jason Pittman’s online store. Are you already a fan of the comic? Sound off in the comments or send us your thoughts on Facebook or Twitter!