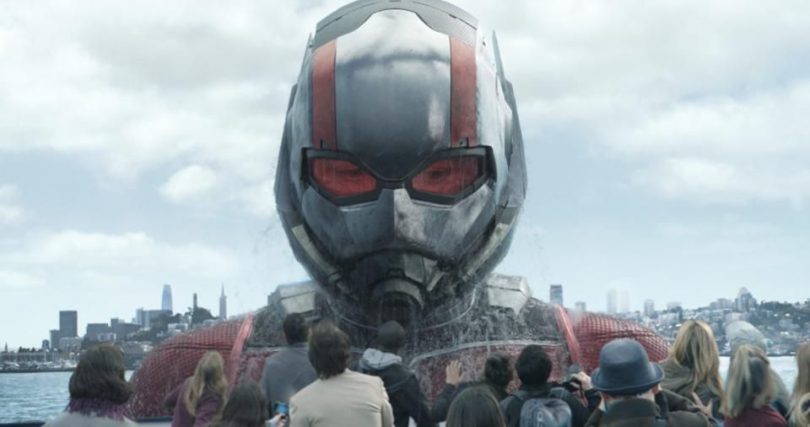 2018 looks to be a promising and fun year for superhero films. Things are changing and building up to a climax. Disney may bring the X-Men and the Fantastic Four into the MCU. Black Panther and Avengers: Infinity War are right around the corner, and Ant-Man and the Wasp will round out the year as a tonally ligher movie compared to Marvel’s others. Many thought the first Ant-Man film would be a bit of a risk, as he is a more obscure and silly-sounding character. But, surprise, surprise, it was a huge success. The sequel’s first trailer hints at the consequences of Ant-Man’s involvement in Captain America: Civil War. However, as it should, it focuses more on the visuals, the inclusion of the Wasp (hooray!), and the fun, size-changing fight scenes.

The trailer reveals that Scott Lang (Paul Rudd) has a lot of trouble waiting for him post-Civil War: he is now not just a wanted thief, but possibly a war criminal too. It appears he is still allowed to see his daughter Cassie (Abby Ryder Fortson), but I doubt that Lang has been given a clean slate. The ankle monitor given to him by the FBI suggests otherwise. Civil War was an important part in the MCU, featuring the seismic splitting of the Avengers. And with all the other Avengers saving their next appearances for the team-up, we need at least one superhero to face Civil War‘s consequences, and Ant-Man makes the most sense. (This is, of course, assuming that the movie actually takes place before Infinity War or at least that Ant-Man has a fairly small role in it.) 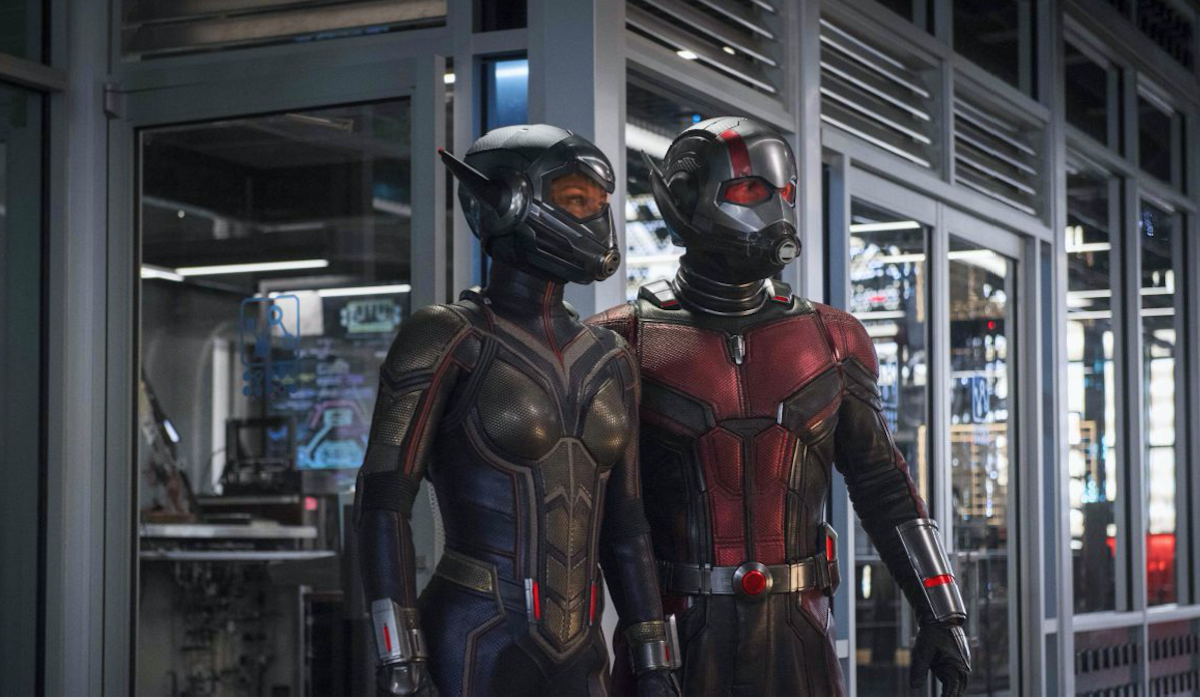 Another thing that surprised me was that supporting characters are affected by the actions of Ant-Man. Hank Pym (Michael Douglas) and his daughter, Hope (Evangeline Lilly), are forced to go on the run from the FBI as well. The Pyms appear to be going off the grid, with Hank shrinking an entire building down to the size of a suitcase. Talk about taking your work with you. We know that the government, or at least S.H.I.E.L.D., wanted to control Pym’s shrinking technology, and Ant-Man’s actions are all the excuse they need to go after Pym. Plus, Spider-Man posting his recordings on YouTube must have only made things worse. Way to go, webhead…

The whole trailer is just great fun. The Marvel logo pops out of nowhere like it was just increased in size by a Pym Particle Disc, and is cleverly accompanied by a guitar rift from a song by Adam and the Ants (cause, you know, ants). 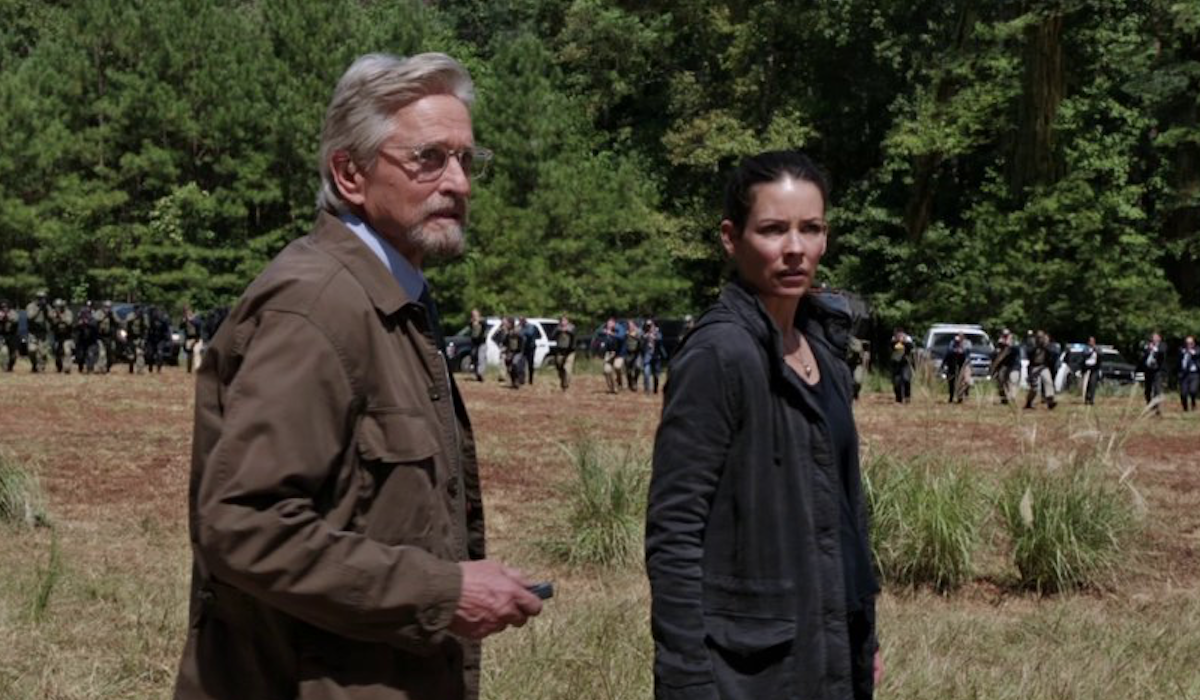 Anyway, it looks like Lang may lose his ankle bracelet at some point because later we see him with Hope and Pym wearing a bathrobe with no bracelet in sight. This could alternatively take place before he gets it, with the Pyms ditching Lang for jeopardising their operation. The trailer teases new characters like Laurence Fishburne‘s Bill Foster. Bill Foster is Pym’s friend and former assistant, who doubles as the superhero Goliath, who has the same enlarging power as Ant-Man. I doubt Bill will take on his alter ego in the film, likely being a part of the older generation of superheroes like Pym. But, who doesn’t want to see Morpheus kicking some ass again, even if only in a flashback?

We also see brief glimpses of the film’s villain, Ghost. In the comics, Ghost is fittingly an anonymous male hero with phasing powers. Here, the character is now female, played by Hannah John-Kamen. Her costume makes her look like a cross between Cobra Commander and the hero of Assassin’s Creed. We don’t know who Ghost is working for, but it is obvious she is gunning for our tiny heroes. However, Walton Goggins will be appearing as Sonny Burch, a businessman who likely wants to get his hands on the Pym technology. He is seen participating in a car chase that involves our heroes and Ghost, but also on a ferry (with Pym’s shrunken down building) being watched by a giant Ant-Man. 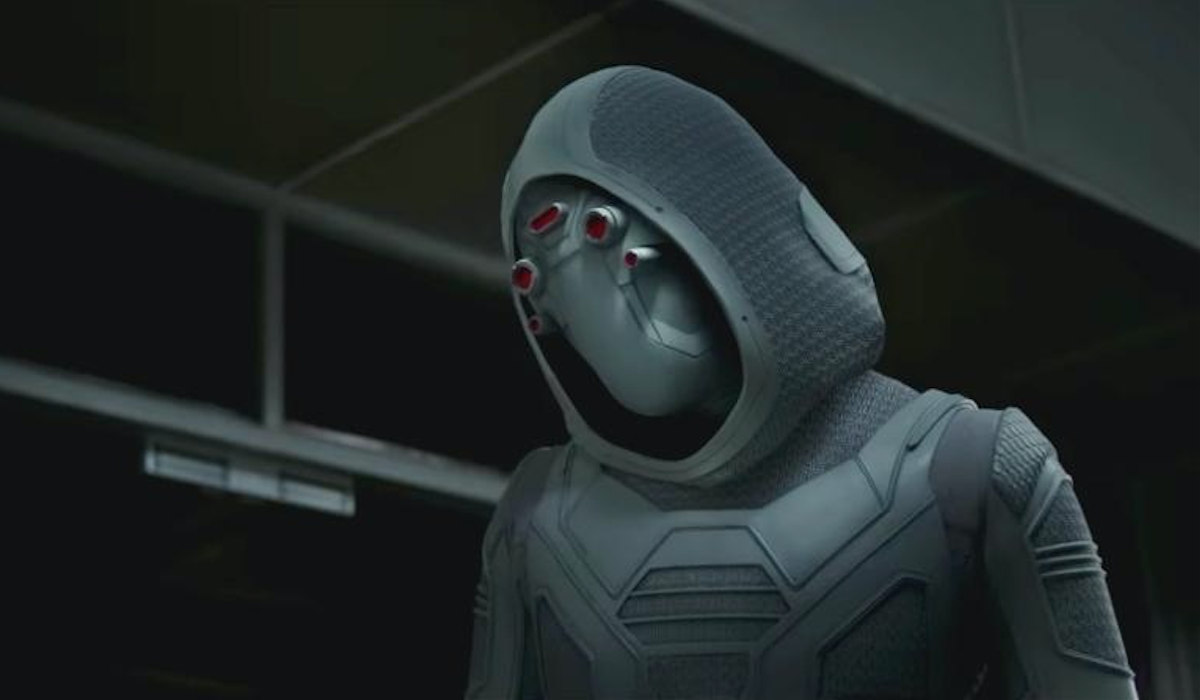 Throughout the trailer, we see great use of the shrinking and supersizing tech for some gags. Lang and Hope use it to shrink down their getaway van and then take out enemies by resizing it. Everyone’s favourite storyteller Luis returns, and may be involved in the action through a sweet-looking purple car with flames on it. It may just be me, but it looks like a toy car enlarged to lifelike proportions.

Janet Pym, the original Wasp, is due to make an appearance, played by Michelle Pfeiffer. The character was lost to the Microverse, but it looks like she will escape. A couple of times, we glimpse some sort of rocket-powered pod, which has been shrunken down to microscopic levels. I theorise that Ant-Man and the new Wasp will use this device to venture into the Microverse and rescue Janet. But who knows what thirty years of isolation in an ever shrinking environment can do to a person? I really hope Janet does not turn out to have gone mad or evil. That would be incredibly silly. Instead, I would like to see Pfeiffer act with a more nuanced approach to her time trapped in the Microverse. 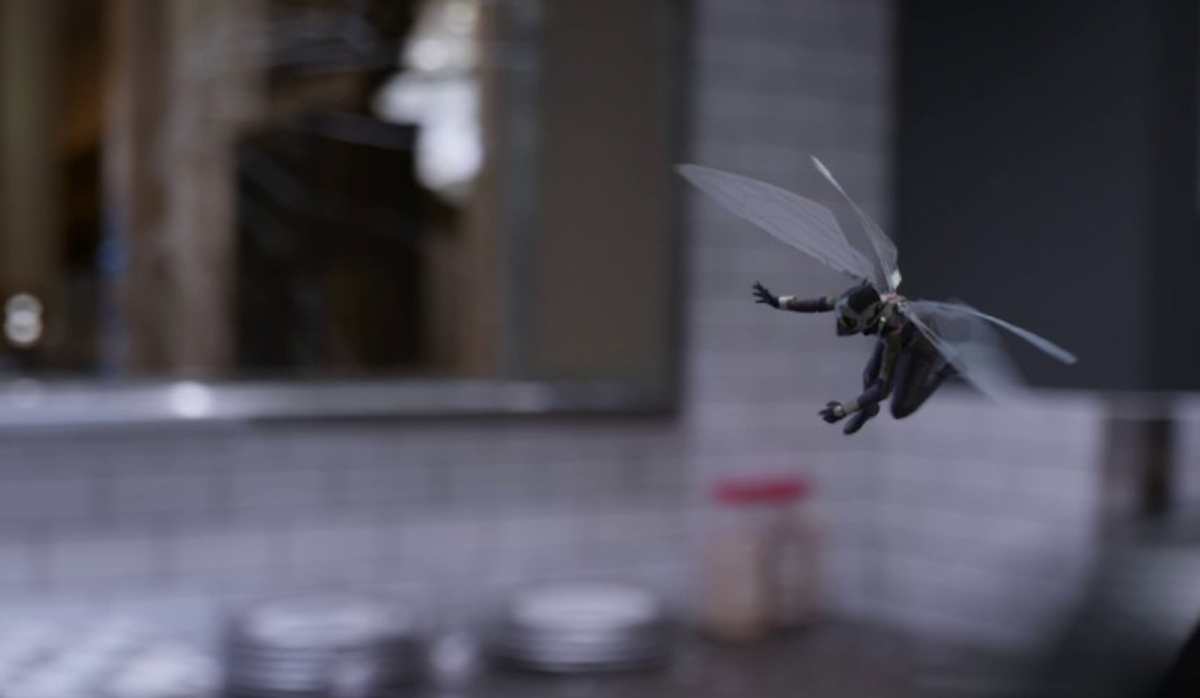 The major highlight of the trailer is the Wasp’s entrance into the MCU. Hope’s previous gymnastics and combat experience will certainly help her out in her field work. The Wasp looks to be an awesome addition to the MCU’s line-up of heroes, and the use of her wings and shrink tech makes her even cooler. Plus, Pym points out the Wasp’s suit has blasters, joking that he wouldn’t trust Lang with them. That’s a good point; after all, this is the guy who mistook a fuel truck for a water truck in Civil War‘s airport fight. After the title card, we get one more action beat, where the Wasp enlarges a Hello Kitty PEZ dispenser and throws it at the bad guys. That’s a pretty creative way of using product placement.

Ant-Man and the Wasp looks to be a fun movie, and will probably be more light-hearted than the other films this year. Black Panther and Infinity War will almost surely be  more serious, darker, and heavy-hitting. I have no doubt that Ant-Man’s sequel will be a success, and continue MCU’s unprecedented winning streak with audiences.

Are you excited for Ant-Man and the Wasp? Will it surpass the original film? Leave a comment below or send us your thoughts on Facebook or Twitter!