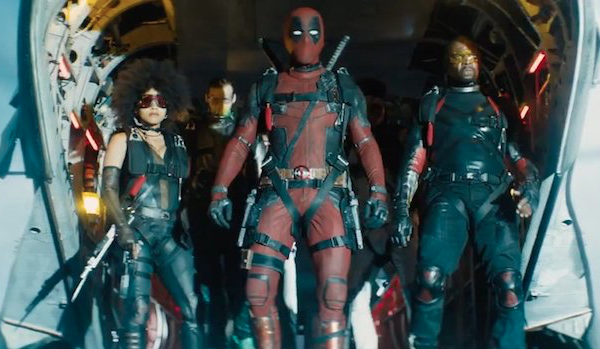 May is a wonderful time of year. The days are longer, the weather is perfect, and all the best movies start making their way into theaters. In May 2018, not only are we being graced with the presence of Solo: A Star Wars Story (which I’m honestly not too thrilled about) and Avengers: Infinity War (which I’m absolutely stoked for), but we’re also going to be treated to the sequel to one of the best (in my opinion) R-rated superhero movies of all time: Deadpool.

Yes, Deadpool 2 is only three months away, and we’ve finally been graced with a full trailer! Take a look below.

Now go ahead and watch it again. Let it envelop you in all its glory.

All right, now reel it back in, pervert. It’s time to get to the good part: breaking down the trailer.

I was honestly surprised by the first Deadpool movie. Not only was it actually a lot of fun, but it seemed to be a hit among both comic fans and non-comic fans alike (unless you’re one of those people who hate fun action movies). I think it’s because the movie didn’t fall into the classic pitfall of trying too hard to appeal to both types of audiences. Instead, they went in and just had fun with it. And that’s what it’s all about: fun (and by ‘it’, I mean both superhero movies in general and Deadpool himself). So will Deadpool 2 be able to capture that same magic in a bottle and deliver a satisfying sequel? Well, I’m not sure yet.

Let’s point out the obvious first: Cable. If you’re not a big comic reader, then you’re probably clueless as to who this guy is and why he’s such a big deal. In short, he’s a time-traveling mutant with technological upgrades, superhuman abilities, and lots of guns. Other fun facts about Cable include that he’s the son of X-Man Cyclops, he enjoys long walks on the beach, and he’s one of Deadpool’s closest allies/friends.

As you can probably tell from the trailer, Cable’s personality is nowhere close to Deadpool’s. While Deadpool enjoys tearing down the fourth wall and making wise-cracks every few minutes, Cable refuses to play around and only has one thing on his mind: completing the task at hand. This is why the two work so well together: balance. You need a yin and a yang, a peanut butter and a jelly, and in this case, a Cable and a Deadpool.

Josh Brolin is a national treasure, and I don’t want to hear anything else about it. Yeah, yeah he’s already Thanos in the Marvel Cinematic Universe, but why should that stop him from playing Cable in the X-Men universe (unless everything decides to come together in one giant cohesive universe, at which point, we’re in a bit of a pickle)? Deadpool, being the fourth-wall-breaking nut that he is, can’t help but make a few oblique references to Brolin’s other role. In the trailer, just after referencing Justice League‘s infamous Superman mustache fiasco, Deadpool says Thanos’ only iconic line (“I’ll do it myself” from the Age of Ultron end credit scene), then mentions that Cable was “a lot taller in…” something, and finally claims to have “the stones to help him”. Infinity Testicles anyone?

Brolin’s few seconds in the trailer have proven to me that he was the right man for the job (despite my insistence that Ron Perlman would’ve been an excellent candidate as well). My only request: there HAS to be a part in the movie where Deadpool makes a reference to Brolin’s dual roles. Like maybe he points at Cable’s hand and goes, “Where’s the gauntlet” or something stupid like that. Just give us lonely nerds an Easter Egg.

Love or hate the casting, you can’t say you’re a true Deadpool fan unless you agree that Cable’s inclusion (even a cameo) is a necessity. I guess it’s a good thing we had the first movie to flesh out Deadpool as a solo character, but now it’s time to let his backup shine. Aside from Cable, I expect Al and Weasel to get more stand-out moments this time around.

I know DP is the star of this movie, but I’m willing to bet that Brolin will have just as much screen time. In fact, judging by the first few seconds of the trailer, I think Cable will be kicking off the movie with a short vignette about his life in the apocalyptic future. Then Deadpool will make a snide comment about how it’s his movie and he should be front and center. Roll opening credits.

Have I talked about Cable enough yet? Can you blame me if I have? Fine. Let’s do a quick roll call on the rest of the cast. As mentioned already, Al and Weasel are back, as well as Vanessa (hopefully this time we’ll actually see her show some of her comic counterpart’s abilities). We see a bit of Negasonic Teenage Warhead (rocking a new uniform and haircut), and although he’s listed in the credits, Colossus doesn’t make an appearance in the trailer. Oh, and how can I forget about Dopinder, the lovable taxi driver? All our favorites are back!

Joining the cast is newcomer Domino, a mutant assassin with the ability to manipulate luck in her favor. There was a lot of controversy regarding Zazie Beetz‘s casting since Domino is portrayed in the comics as white and the actress is black. If you’ve been following my writing, you know how I feel about changing the race of characters (spoiler: I don’t really care). But given this controversy, I really hope Deadpool calls this out during the movie. The joke practically writes itself. All he has to do is make an off-hand remark about how losers dwelling in their parents’ basements are having seizures about changing the race of a character in a comic book movie. Ya’ll can get mad about this all you want; I’m just pumped that one of my favorite lesser-known mutants is finally getting the spotlight. I’m just praying that she doesn’t get underused like Psylocke in X-Men: Apocalypse. Domino deserves better.

Several other characters are making an appearance as well. During the trailer, there’s a shot of Deadpool and his team about to exit a plane. We see DP and Domino, and standing to their left is a currently unknown character being played by… Terry Crews?! Hold up, Crews is in this movie? Who is he playing? Could be be playing Bishop? Yeah, Bishop already showed up in X-Men: Days of Future Past played by another actor, but this isn’t the first time the series has recasted roles. Oh, please let Crews have more than just a cameo in this movie. Please, please, please.

And behind DP, Domino, and Crews, we see two more mutants, and, like the rest of the comic community, I’m almost positive one of them is Shatterstar. Wow, this movie is going all out. I’m a little worried about the over-saturation of characters, but at the same time, I’m pretty stoked that we’re finally seeing them on the big screen.

But who is the villain this time around? Though we don’t see him in the trailer, all signs point to Black Tom Cassidy, a recurring villain of the X-Men (and often Deadpool). Does Black Tom’s role lead to the dreary future from whence Cable came? Or is there some hidden villain underneath who is secretly pulling the strings? Only time will tell…

Ajax was a pretty weak villain in the first movie, and I’m sure BTC won’t be especially memorable, but who cares? We have Cable, Domino, and Terry Crews in this movie, so it has to be good, right? If not, we can just watch an hour and a half of Deadpool playing with action figures like he did in the trailer. I’m totally fine with that as well.

Deadpool 2 comes out May 18th!

What did you think of the trailer? Are you excited for Deadpool 2? Let us know your thoughts on Facebook or Twitter!