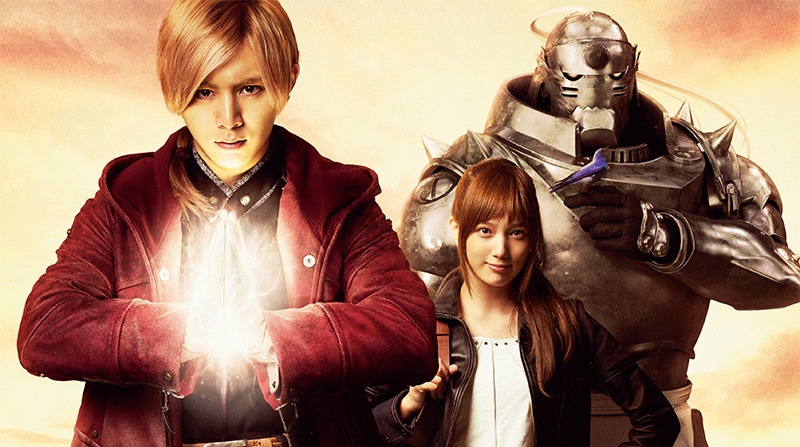 Fullmetal Alchemist is the greatest anime of all time! I am just saying that here and now. I love this thing franchise to smithereens. Hiromu Arakawa’s moving manga is an epic tale of brotherly love. Fullmetal has had two separate anime, which are both great in their own ways. And now, a live action movie has been released on Netflix, likely to compensate for the backlash against Death Note. Like Ghost in the Shell, it is visually good and honouring the look of the anime, the new film lacks the same spark and soul as the source material. It looks more like a cosplay fan film shot with hi-def cameras. But, there might be some heart to this transmutation gone wrong.

Fullmetal Alchemist is set in a vaguely European setting where the entire cast is Japanese. While last year’s anime movies were chewed out for being whitewashed, Fullmetal has western characters played by an Asian cast. The same thing was done with the Attack on Titan movies as well. Weird. In this world, alchemy is a practical science, used by the state military of Amestris in warfare and combat. It isn’t really your standard alchemy though. No one turns metal into gold, but instead use complex transmutation circles to perform whatever they want within the vague laws of the world. It is more magic than alchemy to be honest, but allows for some cool powers and visuals.

Our heroes are the Elric brothers, Edward (Ryosuke Yamada) and Alphonse (Atomu Mizuishi), who try to use alchemy to resurrect their dead mother. This goes against the laws of nature and as cosmic punishment, Ed loses an arm and a leg, and Al his whole body. Ed then binds his brother’s soul to a suit of armour, but Al can’t feel anything, eat, or sleep. Gaining mechanical limbs, Edward becomes a member of the military police, the “Fullmetal Alchemist”, and works with Alphonse to apprehend misguided alchemists. They both search for the coveted Philosopher’s Stone (yes, the same one from Harry Potter), which can bypass the laws of nature, to restore their broken bodies.

On their search, the brothers unearth sinister conspiracies involving human experimentation and staged conflict, masterminded by the inhuman evil Homunculi for a larger, vaguer plot. The director Fumihiko Sori made the wise move to only focus on the manga’s first arc, but incorporates drama from both anime as well. And yes, fans, the most infamous moments of tragedy play out here. The script reworks some elements with the story, which could cause problems in potential sequels. Only the most important characters are included, so fan favourites like Scar and Major Armstrong are noticeably absent. Scar would be essential to future sequels if the manga’s story remains closely followed.

The plot becomes increasingly complex until the third act reveals various characters have confusing motives that totally come out of nowhere. I am admittedly biased, having grown up and loving both versions of the anime and manga, and expect the same level of characterization in the film. It hits a few of the better known set pieces and moments, most of which have been contextually altered. Most of the characters aren’t very interesting or too serious and brooding.

Alphonse is the deuteragonist but is sidelined most of the time, replaced with the Elrics’ childhood friend Winry Rockbell (Tsubasa Honda) for certain adventures. There is this incredibly dumb subplot carried over from the manga where Alphonse questions his own humanity as never having existed at all.  Ironically, this is where the best acting and signs of a bond between the brothers come into play. Alphonse is created via CGI, which looks good, but makes him really stiff on screen. I’m not just saying that because he is a talking suit of armour. He just stands there and barely moves. It might be hard to animate a character who doesn’t have a face, but the stiffness of the model really sticks out.

Ryosuke Yamada is okay as Edward, but doesn’t quite have the charisma, energy, or passion that the his character is so well known for. And he shouts and rages a lot. This was a similar problem I had with Death Note, where Light was made too angsty. I also felt there wasn’t much chemistry or brotherly love between our two heroes. Both have strong ties to Winry, but not to each other. It feels a little empty with the key relationship being so paper thin. Winry herself gets a larger role, but lacks her defining characteristics as a geeky mechanic and homely crutch for the boys.

Still, Fumihiko Sori is clearly committed to making a good movie, and despite the story’s flaws, it successfully captures the visuals of the anime. The alchemy scenes are pretty nifty, and they manage to get the looks of the characters relatively accurate. At times, it can resemble an expensive cosplay photo shoot, and I wasn’t as bothered by Edward’s blonde wig as I thought I would be. Colonel Roy Mustang (Dean Fujioka) and Maes Hughes (Ryuta Sato) are the best characters in the film, and the actors playing the Homunculi (Yasuko Matsuyuki, Shinji Uchiyama, and Kanata Hongō) are clearly having a blast.

While I’ve been a bit harsh to this movie, I won’t pretend that I didn’t enjoy it. I have wanted to see a live action take on Fullmetal Alchemist for years now. While the film didn’t necessarily live up to my expectations, it did certainly give it a go. If only the script was stronger and the key relationship between the brothers was better developed, it would have transmuted into becoming a better movie.

Have you seen Fullmetal Alchemist on Netflix? Was it as good as the anime (both of them), or was it a disappointment? Leave a comment below or on our Twitter feed.