Home » 6 Things We Want in the Sonic the Hedgehog Movie

Video games movies seemed doomed to fail. While there has been the rare diamond in the rough, the task of adapting games to film seems impossible. Nintendo hasn’t let a studio touch their properties for thirty years until Illumination Pictures came along. Sega was not that wise, letting Uwe Boll – the worst director of all-time – make a film based on House of the Dead. But, now, their most iconic character, Sonic the Hedgehog, is spindashing his way to the big screen. But will he be able to break the trend of bad video game movies? The film has some prolific producers. Tim Miller, producer of Deadpool, the Fast and Furious producer Neal Moritz, and Japanese football player Takeshi Ito are all supporting the movie. It is also being partially animated Marza Animation Planet, which creates the games’ cutscenes. Here are six things we’d like to see in this super sonic movie.

That’s a bit of a weird request, I know. The Sonic movie has been confirmed to be a live action/CGI hybrid. A few years ago, an experimental live action Sonic short film was produced. It wasn’t bad, but Sonic’s 3D character model looked quite creepy in a real world setting. However, there is still hope. Incorporating the fast paced style of Sonic into a live action film has a lot of fun potential. While I would prefer a straightforward animated movie, and we always have CGI to help out capture Sonic’s speed. Just avoid slow motion and we’ll be fine.

In other words, loads of fanservice. And I don’t mean the weird stuff you find on Deviantart! It would be great for the film to utilise certain features from the games, comics, and cartoons. The Power Rings worked in the cartoons as power boosters and create protective shields. I could imagine Sonic using them in this manner, and he loses them as you do in the games. The Chaos Emeralds are a big part of the mythos and need to be there for our heroes and villains to fight over. And if Sonic’s trademark food was included, it would allow for some hilarious usage of product placement. After all, there is a chain of chili dog restaurants named “Sonic”. It is time for these grand two coincidences to come together!

4. Make the Story Mean Something 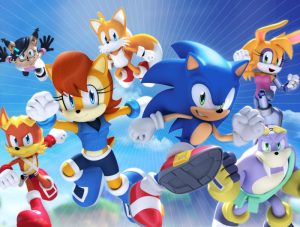 Okay, this will be a film about a talking blue hedgehog who can run fast. Just because that is the premise, doesn’t mean the film can’t have some gravitas too it. Once upon a time, Sega actually put effort into building Sonic’s world and fleshing out the characters. The likes of Sonic Adventure and Sonic Adventure 02 told epic, multilayered stories. The hugely popular “SatAM” cartoon and the Archie comics told more darker, richer tales. These allowed Sonic and friends to grow as people and face personal conflicts. Remember that, Sega? It’s called good writing. Now the games and cartoons are shallow, and devoid of any depth. Just dumb jokes, empty stories, and brainless characters. The MCU managed to make us love a talking raccoon and a tree. Hopefully, there’s room for a blue hedgehog and a two-tailed fox.

Sonic is a cool, radical, bodacious character. Designed to be edgier and more hip than good old Mario, Sonic has maintained this early 90s attitude for twenty-five years. However, that’s all there is to him. Sega made sure of that when they kneecapped any possible character development following the reboot in the Archie comics. Their mandates included Sonic being banned from crying, having a love life, a family, or even going through any changes without their consent. That’s the worst form of creative control. Let Sonic grow as a person. Even the faintest hint of a character arc would be great, and the same applies to the rest of the gang.

Doctor Eggman is not menacing. He is not really all that a threat. Just a bumbling, funny oaf who happens to want to rule the world. Dr. Ivo Robotnik once struck terror into the hearts of Sonic and his friends. Trapping animals in robots took a dark turn in SatAM, when it also meant losing their free will too. As much as I love Eggman, being a bungling buffoon with an IQ of 300 and a machine empire means he should have a more fearsome presence. This franchise deserves a better class of criminal. Eggman needs a good balance of humour and menace. Darth Vader with a moustache. Oh, and if he was to be played in live action, I vote either Alfred Molina or Jeffrey Tambor for the role.

Who are Crush 40 you might ask? They have composed and performed a number of kickass songs over the years for the various video games over the years. From the awesomeness that is “Open Your Heart”, “Live and Learn”, and “What I’m Made Of”, Johnny Gioeli and Jun Senoue capture that adventure and thrill that makes Sonic so enduring. Senoue has also been a game composer for many years as well, and always knows how make the best melodies. Either that, or let them record a theme song for the movie.

What would you like to see in the Sonic the Hedgehog film? Would you prefer it to be fully animated?  Sound off in the comments or send us your thoughts on Facebook or Twitter! And be sure to listen to our recent Podcapers episode discussing the cartoons and comic books of Sonic!