Home » Galvanising the Man’s Mystique, Nick Cave: Mercy on Me is Mercilessly Riveting 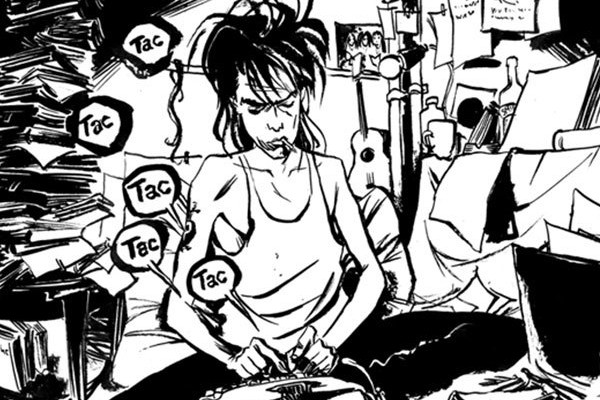 You know you’re on to a winner when a Nick Cave biography is accompanied with a thumbs up from Nick Cave himself. The back cover to Reinhard Kleist‘s enigmatic, scrawling encapsulation of the singer-songwriter boasts a quote that ends by saying Nick Cave: Mercy on Me is ‘truer than any biography’, but curiously begins by affirming Kleist’s stance as a ‘master graphic novelist and myth-maker’. How then should we judge Nick Cave: Mercy on Me if its own subject declares that the comic’s author wilfully manipulates the line between reality and fantasy? Perhaps, akin to Cave’s music itself, it’s best to embrace that distorted reality rather than question it, since that’s clearly the attitude Nick Cave: Mercy on Me opts for.

Kleist’s effort is less of a comic, more of a enjoyably reckless, Armageddon-esque visual profile into the psyche of Cave’s music. Tracing Cave’s career from his early days in the Bad Seeds, his eventual disillusionment of that band, stints of self-discovery and rehabilitation through Berlin and London and beyond, Kleist cherry-picks waifs and strays from Cave’s songs to use them to illuminate Nick’s career. In doing so, a further question arises throughout the comic – is this a biography of Nick Cave, or a biography of his songs? Reading this blitzkrieg of a comic, it undoubtedly feels like the latter.

Nick Cave: Mercy on Me doesn’t skip on the more traditional aspects of Cave’s career however. His early years form the bulk of the comic’s focus, with a fleeting back-end of the comic shining a light on his more commercially successful years. It’s as if once Cave becomes a household name with albums such as Murder Ballads, The Boatman’s Call, Kleist finds Cave less interesting. However, such is the razor-sharp throttle of what Nick Cave: Mercy on Me chooses to focus on, it barely allows you to react negatively to it. I wouldn’t call this a case of my views on this comic melodramatic either, since the comic’s fourth of four chapters, ‘Higgs Boson Blues’ illuminates those feelings, catapulting them to drive the comic into the riveting unknown. None of the other four chapters electrifies Cave’s music quite like this one. Much of the chapter brings its namesake song to life, depicting Cave roaring through the apocalypse to reach the Large Hadron Collider, whilst carrying legendary bluesman Robert Johnson as his passenger. It’s a chaotic sequence of events which Kleist takes full advantage of, visually and narratively, to bring the story to a close as Cave comes face to face with his demons, quite literally. 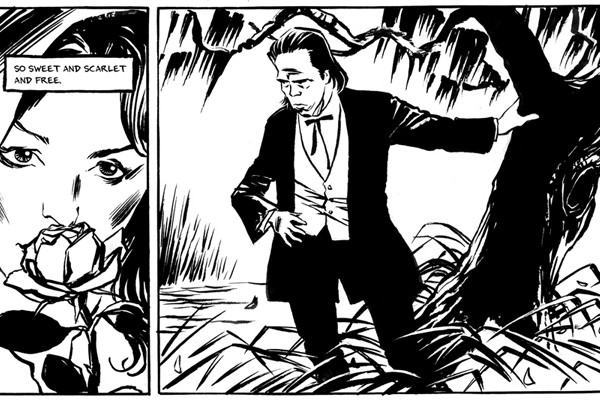 Frank Zappa oft-quoted quip about music journalism, ‘Writing about music is like dancing about architecture’, feels resonant with Kleist’s comic. There’s no doubt that Kleist is indeed writing about music, this is after all a comic about Nick Cave. But Nick Cave: Mercy on Me reads, and looks, like a gargantuan middle finger to Zappa’s quote. Kleist bakes Cave’s music into the sequential form. Cave’s lyrics transfer to become narrative descriptions delivered by story-tellers and dialogue spoken by characters, immersing the reader in the comic’s theme of twisting reality and myth into some grotesque monster. We cut between passages of truth, where Cave and his variety of travelling band members and romances embark on their weary quest for success and scenes from some Gothic Western fantasy. Throughout the four chapters, these scenes of high fantasy scrutinise the moods captured in the various chapters and use that fantasy to craft an encapsulation of Cave’s music.

The whole package is blinding in its successful ambition to be an official account of Nick Cave’s myth. Throughout the visual madness that unfolds from chapter to chapter, Kleist keeps his story-telling credentials intact as Nick Cave: Mercy on Me doesn’t loose its focus on galvanising the songwriter’s myth. Nick Cave: Mercy on Me transcends the need for you to be a fan of the man’s music to appreciate this comic, it’s manic visual personality commands an identity separate and wholesome from Cave’s music.

You can discover more about Nick Cave: Mercy on Me from SelfMadeHero. Are you already a fan of the comic? Let us know in the comments section or send us a Tweet!