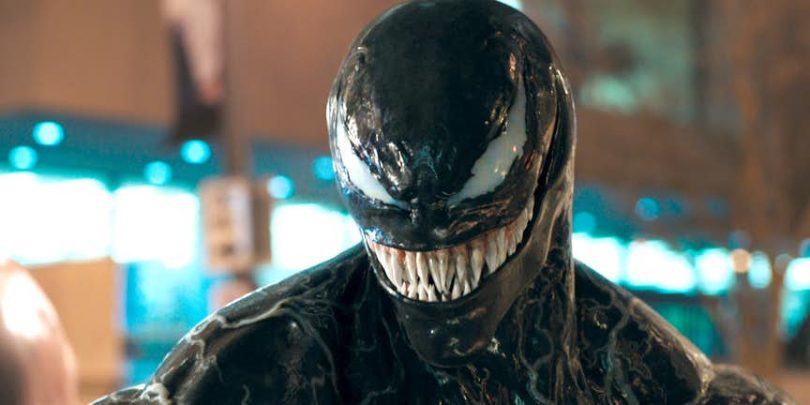 The upcoming Venom film, the first to be released in Sony’s Marvel Universe, has been met with little enthusiasm. Its first trailer left most fans underwhelmed, but Venom‘s second trailer finally divulges the film’s secrets and gives us what we wanted. It promises our favourite wisecracking symbiote will have a larger presence than many first thought, not to mention his “children” may feature too. Still, there is no sign of any connection to Spider-Man. The trailer also features the rather ambiguous term “In association with Marvel”, which only further adds to the confusion about whether or not Venom and other subsequent Sony films are a part of the MCU.

First off, the we see  that Venom’s symbiote is indeed from outer space – via a crashed spaceship. And secondly, it looks like it isn’t alone. There are multiple symbiotes, though this was also shown in the first trailer. It looks like Carnage, Scream, Phage, Lash, Riot, and Agony (or some of them), will be making appearances in the film. Interestingly, the symbiotes are shown to be within containers. I had assumed these were from the Life Foundation, but perhaps the symbiotes were stored in these containers prior to the crash-landing. Perhaps they were part of a science vessel, or weapons made for war. Anyone getting any Alien vibes?

The trailer gives a better idea of the plot. In my review of the first trailer, I had speculated that Eddie would have a more personal journey to cure himself of cancer using the symbiote. Unfortunately, I was wrong. The story seems a little more predictable. Eddie Brock (Tom Hardy) is a San Francisco journalist who is to interview Dr. Carlton Drake (Riz Ahmed), director of the Life Foundation. Eddie’s wife Anna (Michelle Williams) works for a firm that represents Dr. Drake’s sinister company. Eddie, obviously being the type of journalist who goes for the jugular, asks if the Life Foundation experiments on vulnerable people. He is promptly kicked out of the laboratory.

In the comics, the Life Foundation is utopian-obsessed survivalist group. Here, it appears to have been reworked into a company dedicated to guiding human evolution at the cost of humanity. It’s obvious they are a shadowy organization with little morals. Brief glimpses show other volunteers look a little unaware of the horrors about to be unleashed upon. Dr. Drake and an army of white coated scientists watch on with fascination.

It seems one scientist, played by Jenny Slate, turns whistleblower and informs Eddie of Drake’s plans. Eddie appears to sneak into the labs to take a look, encountering several of the symbiote victims. Strangely, Slate mispronounces symbiote as “sim-bye-oat” rather than sym-bee-oat”. Anyway, it looks like Eddie gets captured and forcefully bonded with the Venom symbiote. But, he probably escapes and returns home feeling ill. It soon becomes clear that he and the symbiote haven’t completely bonded yet. He starts hearing the symbiote’s voice in his head (sounding suspiciously like Tony Todd), and they appear to fight for dominance.

A group of Drake’s goons pay a visit to retrieve the symbiote. But, apparently being idiots, they only brought guns to an alien brawl. Eddie starts shooting out symbiote tentacles from his arms and back, comically kicking the thugs’ asses. The scene ends with Eddie saying, “Why would we do that?” Yes, yes, he’s speaking as “we”. This continues in the following scenes, where Eddie tries to negotiate with the symbiote, ordering it to only attack “bad people”. The symbiote seems to have other ideas, throwing Eddie around, and deciding that “[they] can do whatever [they] want”.

The trailer’s tagline is to embrace one’s anti-hero, which Eddie will likely do here. The only problem is we don’t really see what Eddie is like as a person, or show any hints of a darker side. As far as the trailer goes, he seems like a rather meek do-gooder with a strong sense of justice. The film does take inspiration from the comic book Lethal Protector, where Venom served as a vigilante in San Francisco.

In an action montage, we see Venom fleeing from Life Foundation thugs on bikes, in cars, and ATVs. Eddie smashes his way through a log with effortless ease, leaps out with a high story building window, and his tentacles help him stay attached to a leaping motorbike. Life Foundation appears to be plotting to target Anna if Eddie does not comply with their efforts to recover the symbiote. Good luck with that!

The final scene appears to take place after Eddie escapes the goons in the initial fight. His body can bee seen being covered in the symbiote. He then grabs a surviving thug, and for the first time, Eddie transforms into Venom, introducing himself as “We…are Venom!” It is a brief moment, but it got by blood pumping. He’s got the huge milky eyes, the fangs, the long tongue, the white veins. They’ve even got the drool! Yes, I am excited for drool. Though, that is what this film could be. The equivalent of drool.

It could, and more than likely, be a bit of disappointment. It is obviously being made to cash-in on Sony’s remaining license for Spider-Man’s characters. But, I consider myself an optimist, and hope that it will at least be fun. Tom Hardy is always great entertainment, and seeing an accurate-looking Venom on the big screen will be a blast.

And, is it just me, or does Tom Hardy’s accent in the trailer remind anyone of John Leguizamo‘s version of Luigi from Super Mario Bros.?

What were your thoughts on the second trailer for Venom? Better than the first, or is it just the same drivel as before? Leave a comment below or on our Twitter feed.