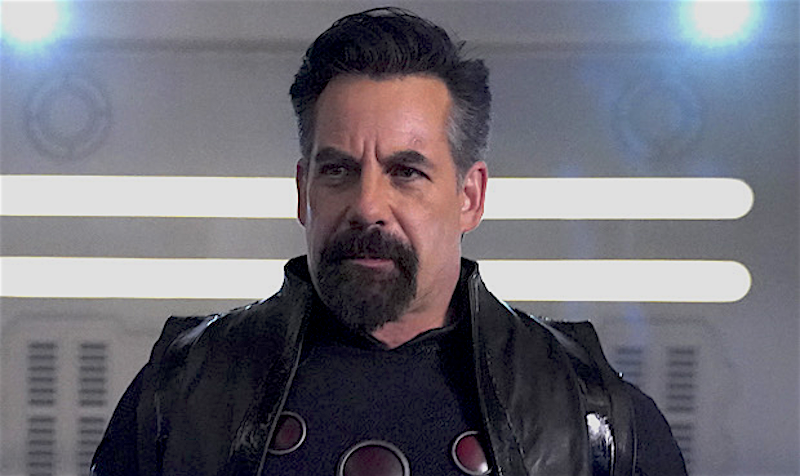 Welp, looks like, “It’s (still) all connected.” This week, the most notorious purple alien in the galaxy got an ominous name-drop that spells trouble for our favorite agents. The looming threat of an alien attack was all but confirmed in, “The One Who Will Save Us All,” as the current big-bad of the MCU was mentioned.

The episode picks up with Talbot and Coulson making their way up to the space invaders’ ship. It takes little time for Talbot to use his new powers to turn one of the marauders into a pretzel and demand that all the rest kneel before him. While Coulson watches on (concerned and a little disturbed) Talbot gets himself a new outfit and a meeting with the mysterious Confederacy. Coulson understandably wants to tag along to keep the General in check, but ends up being relegated to the ship while Talbot and Kovos use the teleportation device to meet up with the five other members who make up the space council.

The meeting starts rough and grows rougher as Talbot goes from being rejected to killing off one of the members for a seat at the proverbial table. The move winds up impressing the rest of the Confederacy, enough that Master of the house Kasius give Talbot some props and drops an info bomb: some alien named Thanos is attacking Earth and intends on wiping humans out. OG Kasius also tells Talbot that there’s an untapped supply of Gravitonium beneath the Earth’s crust that has the potential to make him invincible. Talbot is all about this and, when Coulson tries to tell him that Kasius is lying scum, he turns his powers on Phil until the S.H.I.E.L.D. leader kneels before him.

Back on Earth, the team is doing their best to (once again) figure out where the hell Coulson is. While they manage to hold one of the alien marauders captive, the group doesn’t get much information from him since he quickly dies as a result of ingesting a black liquid that is the alien equivalent of liquid steroids. Simmons sets out to dissect the alien while Mack and Fitz go off to figure out how to make the Zephyr space-ready through the use of artificial gravity (thanks what little Gravitonium Talbot didn’t ingest!)

Somehow, the gang ends up being successful at making the Zephyr ready for space travel. May, Daisy, Deke, and Davis hop into the aircraft and blast off while FitzSimmons, Mack, and Elena remain in the Lighthouse to work on perfecting the Centipede serum and provide ground support. The Zephyr docks on Talbot’s fancy new space ship and the dynamic duo that is Daisy and May promptly start taking down baddies in search of Coulson and Talbot.

While they manage to successfully locate the men, May and Daisy quickly realize that Talbot is no longer Team S.H.I.E.L.D. In fact, Glenn knocks out Daisy and threatens to kill Coulson unless May surrenders to him… which she does because, c’mon, it’s Coulson and May! The episode ends with Talbot declaring that Coulson and S.H.I.E.L.D. are the enemy, locking up his former allies, and gifting Quake to daddy Kasius.

What did you think of the latest Agents of S.H.I.E.L.D.? Sound of on Twitter or in the comments below!