Home » Agents of S.H.I.E.L.D. Brings Tears and Triumph in “The End” 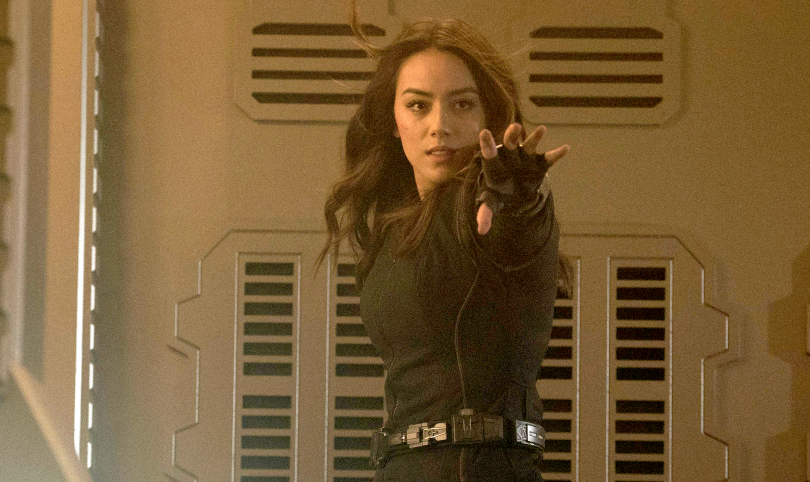 Well holy hell with a side of WTF.

That was one of the more jaw-dropping season finales that has been churned out over the years, which is saying a lot considering how well-known Agents of S.H.I.E.L.D. is for its insane season-enders. It shouldn’t come as a surprise that not all of our favorite agents made it out of the hour alive, and if you happened to shed a tear or a dozen… you’re probably not alone.

How far are you willing to go to save the ones you love?

We open “The End” with the same argument that the team has been debating for the majority of the back half of the season: Save Coulson or save the world?

The team remains divided, with May/Daisy/and Mack all firmly in the “Save Coulson” camp while FitzSimmons and Yoyo are more interested in following their leader’s own wishes and letting Coulson die in order to break the loop and save everyone else on the planet. Mack makes a valiant attempt at democracy, suggesting that they put it to a vote, but the decision is taken out of everyone’s hands when May smashes the Odium meant to take out Talbot if combined with the last Centipede serum. 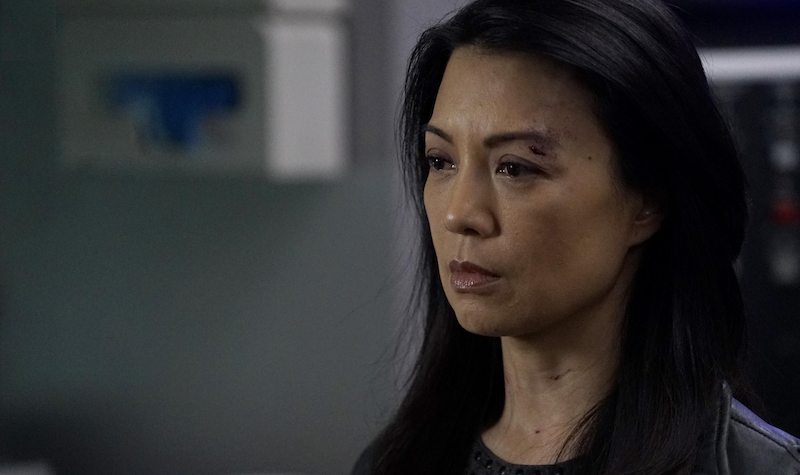 It’s a decision that only increases the rift between everyone but, before too much additional conflict can arise, S.H.I.E.L.D. gets a lock on Talbot’s location and the gang puts their differences aside to focus on the larger issue: stopping the former general before he literally destroys the world.

While the group heads to Chicago on the Zephyr, May has a chat with Coulson where she makes it known that she wants him to keep fighting and take the Centipede serum/cure that FitzSimmons managed to develop. She leaves the serum with him before heading back to meet the team for a meeting called by Daisy. At the meeting, Daisy shows true leadership by opting not to be the leader in Coulson’s absence. She points out that Mack is the moral compass of the group and steps up whenever he’s needed to. The rest of the team agrees and unanimously vote for Mack to take on the role of Director of S.H.I.E.L.D.

Evacuate downtown Chicago, find and extract Robin and her mother, and figure out what to do about Talbot. Just as Mack begins making orders, Coulson emerges and offers to join the fight to talk down Talbot before the new villain hurts anyone else.

So, while Yoyo and Simmons stay on the Zephyr to help usher terrified Chicagoans to safety, May/Fitz/and Mack go off in search of Robin while Coulson and Daisy take a QuinJet to confront Talbot. While Daisy assumes Coulson will be doing the talking, Phil drops a bomb and reveals that he won’t because he can’t. Turns out he didn’t take the Centipede serum like everyone assumed and is too weak to do anything other than give Daisy the pep talk she needs to take on Talbot by herself.

As Coulson is collapsing and receiving CPR back on the Zephyr, Daisy is doing her utmost to appeal to whatever rational side might still be in Talbot. Unfortunately, there is no rational side and the interaction quickly gets physical. The two come to blows and it looks as though Talbot has the upper hand. He liquefies himself and begins the process of absorbing Daisy when she notices that Coulson had tucked the Centipede serum into her gauntlet. Daisy then injects herself with the super-serum and quakes Talbot out of the stratosphere where he dies in space.

Elsewhere, Fitz, May, and Mack are pushing to rescue Robin and her mother from one of the collapsing buildings. The trio manage to get mother and daughter out of harm’s way but, just as the others are in the clear, Fitz gets crushed by a pile of crumbling cement that falls from the ceiling.

Mack and May manage to move the debris off of Fitz… and reveal something even worse than a few pounds of concrete. As it turns out beneath the rubble, Fitz got impaled by a massive sheet of metal shrapnel that all but sliced him in half. It’s a fatal wound and, despite his best efforts to fight it, Fitz dies a hero with two of his friends by his side.

You read that right. FITZ IS DEAD!

If that wasn’t painful enough, Mack then has to break the news to a none-the-wiser Jemma. Using nothing more than a teary look, Mack informs Jemma FitzSimmons that she is now a widow, resulting in one of the most heartbreaking 10 seconds of dawning realization to ever be witnessed on screen. 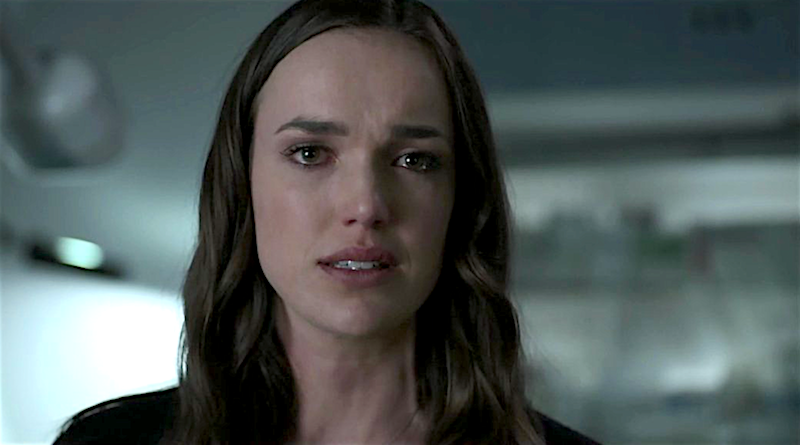 And that’s still not the end of it.

The final act of the episode has the S.H.I.E.L.D. gang gathering for what looks to be a memorial for the recently fallen Fitz. We see Jemma wearing black and packing up her bunk as an “In remembrance,” plaque is affixed to the Zephyr. The entire team then meets in the cargo bay, glasses full of whiskey, to celebrate the life of one of their own… only it’s not Fitz the group has gathered to mourn/celebrate. It’s Coulson.

The face of S.H.I.E.L.D. is retiring, intent on living out the remainder of his life (be it a few days or a few weeks) away from the chaos of the agency. But he’s leaving his legacy in capable hands with Mack and Daisy co-leading the team on any and all new missions… including the search for the very much alive-and-well Fitz of the past/present who is acting as Sleeping Beauty somewhere in space. Because while Fitz did die, that was technically future Fitz who woke up in 2094 and teleported back to 2018… where his past self is still in cryo.

Just know that Coulson and May are sticking their toes in the sand of Tahiti while the rest of the team is off to search for a Fitz that should theoretically still be in one piece.

What a doozy of an episode this was. There were some major highs, some major lows, and enough WTF moments to make me question what in the heck could possibly happen moving forward.

Major kudos need to be given to sir Clark Gregg. The man has served as the face of S.H.I.E.L.D. for a decade and has become a beloved staple within the Marvel Universe. He made Phil Coulson a character that people could instantly connect with and, if this really is the end of our favorite man named AGENT, hopefully Gregg knows how sorely he’ll be missed. Hats off for a tremendous character, consistently wonderful performances, and a fan-favorite who actually deserved to be.

“The End,” is not the end of Agents of S.H.I.E.L.D. The team (rather, most of the team) will live to fight another day with a Season 6 pick-up that will bring new missions, and perhaps a few fresh faces, come Summer 2019. Mark your calendars and prepare for a long hiatus during which you can at least attempt to wrap your head around the insanity that came with this week’s finale.

What did you think of the epic Season 5 finale of Agents of S.H.I.E.L.D.? Sound off on Twitter or in the comments below!