Home » Wolf Country #8 is All Bark and No Bite 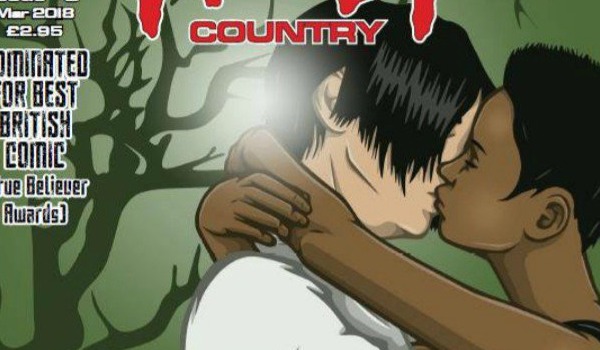 Writer Jim Alexander and artist Will Pickering square off against werewolves once again in the eighth instalment of their series Wolf Country. Expectations were riding high after their vampire hero, Halfpenny, had a physically spiritual debate with his nemesis in the previous issue.  Unfortunately, Wolf Country #8 spends too much time snarling exposition instead of moving its story onward.

In this instalment, we head back into the heart of Wolf Country. There, the vampire soldier Urquhart is on the hunt and hungry like the wolf. He’s an undead man on a mission to track down traitor Luke. Meanwhile, the wolf lair Luke discovers thanks to his lady love the vampires are on their turf. He devises a plan for claw to meet fang on a blood-drenched battlefield in the most holy of vampire locales. And all on Easter too!

Okay, so the last bit isn’t true. Although, that ending line of the previous paragraph is far less cringe-inducing than the actual last line from this issue. I’m not in the business of spoiling things, but it does involve a Baha Men quote.

I’ve said too much.

In any case, this issue of Wolf Country is problematic for a number of reasons, the most damning being the reader is told the story versus showed. All this exposition talk slows the comic way down, almost to a grinding halt. It’s disappointing that a series which historically lets its images speak for themselves do a lot of talking. There were several missed opportunities for quiet but powerful moments. When the vampires approach the sacred tree, what’s interesting is characters see different things while looking at it. What’s not interesting is being told it, with the exception of our focal character for this issue.

Another contributing factor is that this issue blares the spotlight on Urquhart. Fans of the comic may be asking, “Who?” and that’s exactly the point. Readers learn of his backstory, and ultimately, it feels forced. Plus, from what we’ve seen from this character up until this issue, it throws a lot of his past actions into question. Does he need to set another vampire on fire to save his wife and children? He’s been nothing but a tool since his introduction. If the idea of this issue was to inject Uruquhart with sympathy, it’s one brutal assault too late. It’s so strange that in a series that keeps key details and motivations close to the vest, issue eight decides to break away from it.

Also, the artwork for Wolf Country #8 overall matches the story – underwhelming. Mostly panels are filled with a character, chunky dialogue boxes and a whole lot of empty space. Pickering still shines on the gruesome aspects. If you ever wanted to see what a wolf would like if it was stepped on by a horse, clear your schedule. However, there are not a great amount of exciting images. And there’s a fight scene, which makes it all the most disappointing.

Wolf Country #8 is not this series’s strongest issue, though it’s far from a lost cause. The first scene highlights everything great about this series: it’s visually intriguing, tells so much with so little and even has a darkly funny button at the end of the scene. Largely, I think this issue serves as a way to get from point A to point B and hopefully, the ninth issue sets Wolf Country back on track.

Travel into the heart of Wolf Country here, and let us know your thoughts in the comments or on Facebook or Twitter!