Home » Chaos, Technology and the Human Spirit: A Conversation with Callum Fraser, writer of Peace of Mind 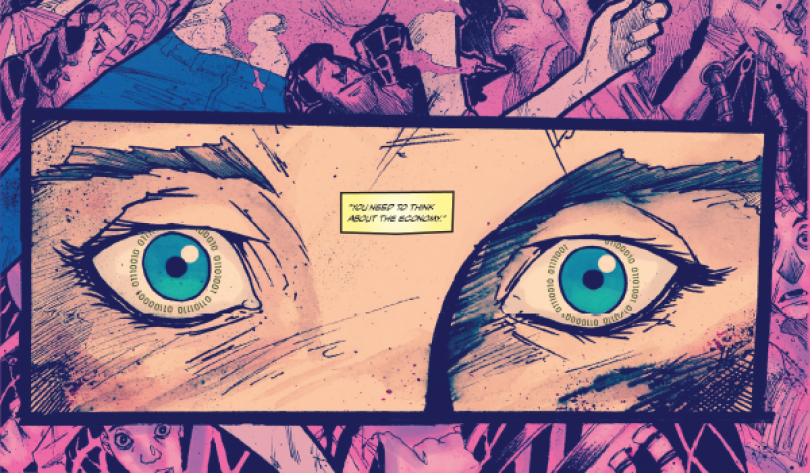 When I reviewed the sci-fi tech thriller Peace of Mind a while back, how well it stood out among similar stories quite honestly surprised me. Much of the comic’s appeal came from its great artwork, but plenty of credit is also due to its writer, Callum Fraser. The story Fraser crafts expertly blends familiar elements of the genre with inventive character beats and solid narrative twists. I was fortunate enough to ask Fraser to reflect on Peace of Mind‘s first issue, a reflection one can enjoy below:

AP2HYC: What was your writing process like for Peace of Mind?

Callum Fraser: In a word: chaotic. It’s the first comic I’ve ever written with an end goal in mind, so there was a lot of trial and error. It started life as a 5-page short before spawning a life of its own. I lost count of how many times I re-wrote the script before handing it over to Rob Jones [artist and colorer] and Emiliano Correa [letterer]. In total, Peace of Mind took about a year to form the story and get it all on paper.

AP2HYC: I can see shades of several other science fiction stories in here, chief among them The Matrix, The Terminator, and Total Recall. What sci-fi books, comics, and movies do you enjoy?

Fraser: Ooph, there’s a long list. At the moment, Adrian Tchaikovsky’s Children of Time has me completely enraptured. As for my staple diet of written sci-fi; I enjoy the Warhammer 40,000 (the Eisenhorn trilogy is a must for all sci-fi fans) and Low universes, as well as the Star Wars arcs Marvel are pumping out (honourable mention to the old Dark Horse ones, too.)

As for films and TV sci-fi, I enjoy anything from gritty Cyberpunk (both Blade Runner [films], Dredd, RoboCop) to Space Opera (Star Wars, Star Trek, Dune, 2001: A Space Odyssey). I enjoyed the recent Altered Carbon Netflix adaptation, too – transhumanism is an interesting theme to explore. 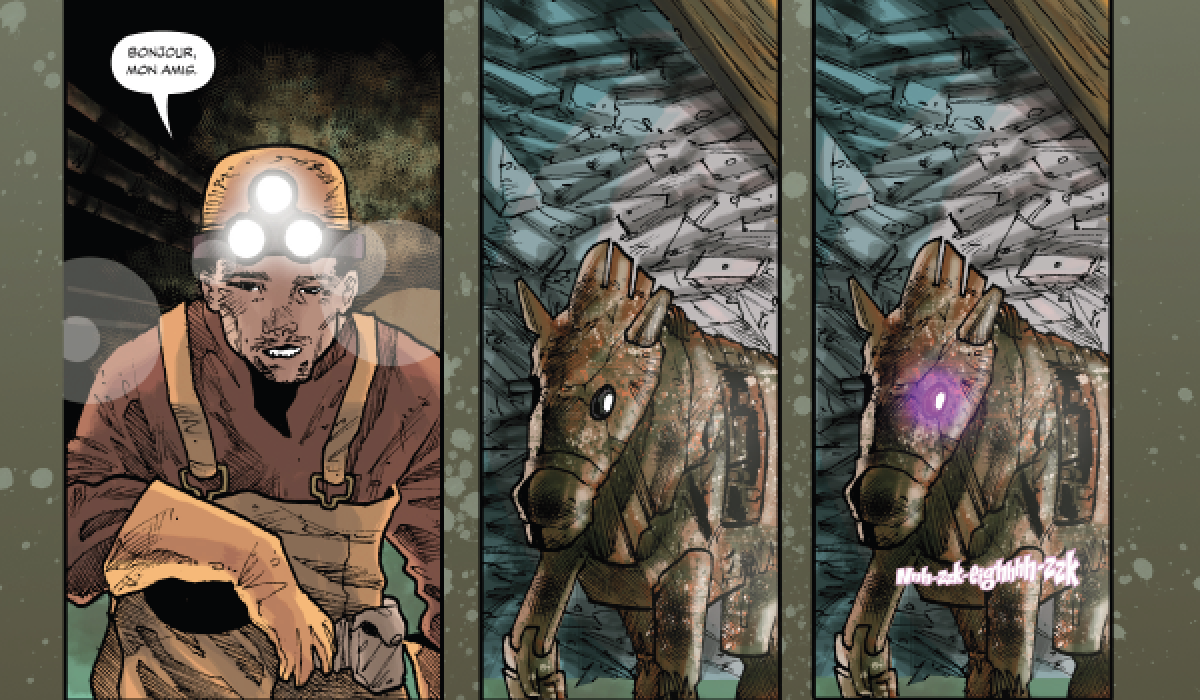 AP2HYC: What attracted you to writing a comic in the sci-fi, dystopia genre?

Fraser: I’ve always been a fan of sci-fi. I’ve been watching and reading it since I was a kid (thanks mum). The dystopian aspect stems from my apprehension towards ethical data handling and how technology continues to proliferate in a morally murky manner. I’d also be lying if I said today’s political climate wasn’t a factor.

AP2HYC: While reading Peace of Mind, I kept coming back to how refreshingly unique this comic was. How did you hope this comic would stand apart from the similar stories?

Fraser: I wanted to give a dystopian story with some hope and warmth to the protagonists. No matter how awful things are and how commodified people are perceived to be in this universe – these folks will still help each other. I wanted to show that technology isn’t the problem; it’s how we use it and twist its original purpose.

Fraser: Connectivity is very exciting, as well as renewable energy and deep learning. I find the tech you can control with your thoughts to be equal parts exciting and scary.

I believe we’ve barely scratched the surface of the data scandals. My mind wonders a lot about the implications; profiling could be even more of a problem going forwards. Hello higher insurance if you’re called Dave, because those named Daves between the ages of 35-40 have a statistically higher incident of car crashes. The possibilities are endless. I also find the dehumanisation of people quite terrifying, whether it’s iCloud hacks or overzealous public shaming. 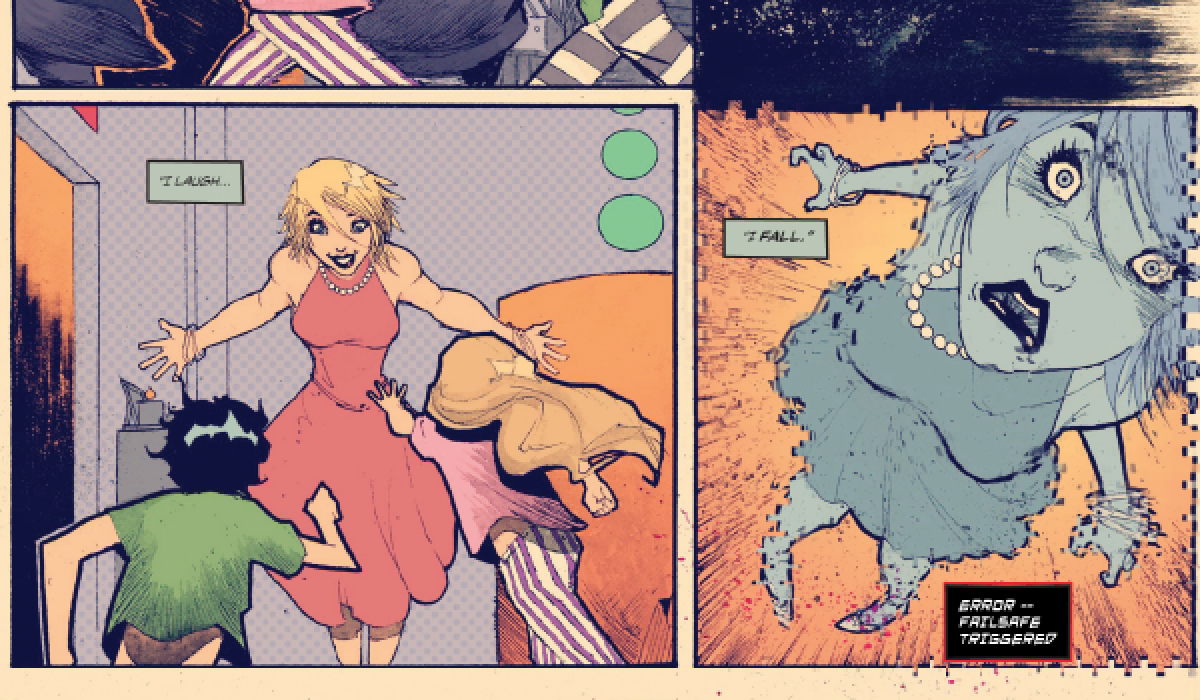 AP2HYC: A number of panels with great emotional impact rely on the visuals instead of any dialogue. What can you tell us about your collaborations with Emiliano and Rob?

Fraser: Emiliano has done a stellar job with facial expressions and set design. We found a system of collaboration which worked best for us and then stuck to it. Right now, it’s a mostly frictionless synergy between us as writer and artist.

Rob did a stellar job with not just the lettering, but with the subtle lettering throughout the comic. For example, the binary code seen throughout the comic and text on computer screens. The first piece of comic creating advice I got was ‘hire a good letterer’, and I’m damned happy I found Rob. He’s a brilliant professional and (dare I say it) a letterer with bags of experience in the small press scene.

AP2HYC: How did you balance Peace of Mind’s inventive futuristic tech with realistic human characters? The two seem so apart at first, was it challenging?

Fraser: A decision I made early on was to not reveal much of the Corporation’s tech. They should be an ever present insidious threat for the characters. The ‘real world’ tech looks unclean and archaic as those who live off the grid view it to be a threat to their humanity, but not their lives (hence their reluctance to use it recreationally).

It was hard, as I always felt the drift to show the Corporation’s world in more detail. However, that isn’t the story of this arc – this arc is about the people who are affected by the Corporation and how society has changed. 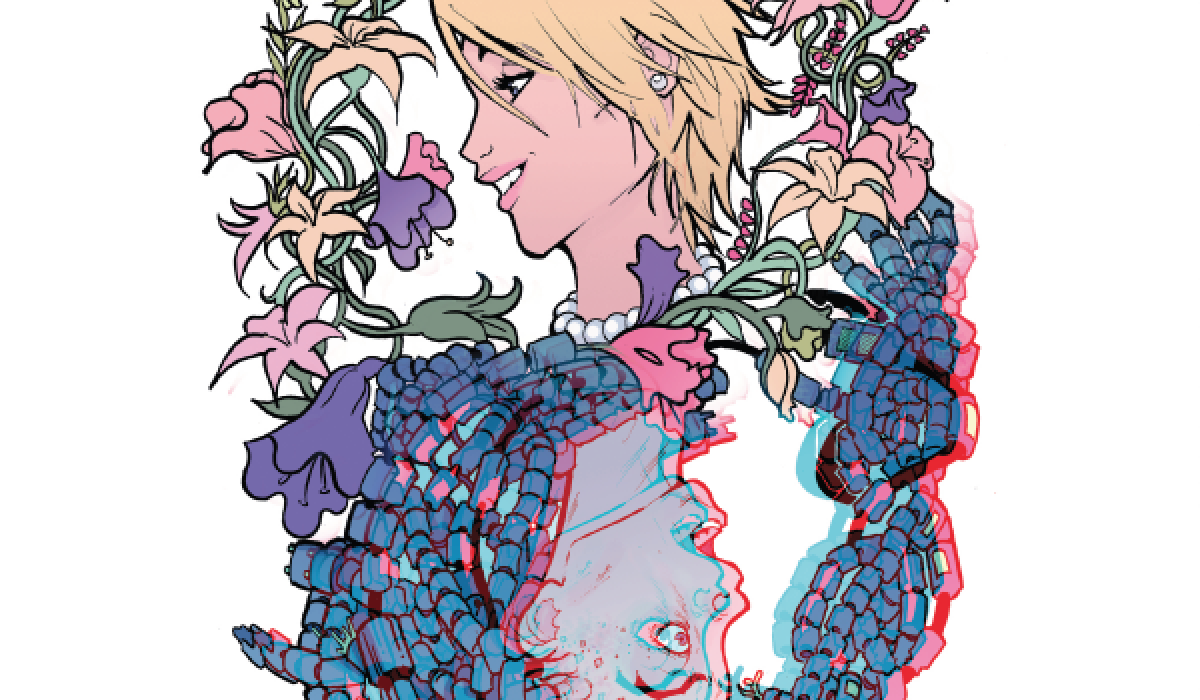 AP2HYC: The end of issue one leaves us with a haunting cliffhanger. Do you know where your story will go next? How far ahead have you plotted out this world?

Fraser: Yes! Peace of Mind is a 4-issue arc, which is all planned out. I am very excited to show it! I have ideas for a second arc, which would deal with different themes and would be tonally different. It would deal more with the Corporate side of the Peace of Mind universe.

AP2HYC: What can we expect to see next from you?

Fraser: Peace of Mind #2 is currently with Emiliano, ready for the Kickstarter campaign in early August. I’ve also been busy getting the Grym Comics side of things up and running – we now have a store at www.grymcomics.co.uk and a mailing list folks can sign up to here.

Check out my interview with Emiliano Correa here! For more news on Peace of Mind, check out the links he’s provided above. What interests you about the comic? How do you see the world of technology unfolding? Sound off in the comments or send us your thoughts on Facebook or Twitter!