Home » Doin’ the Twist: A Conversation with Matt Garvey, Co-Creator of white NOIR 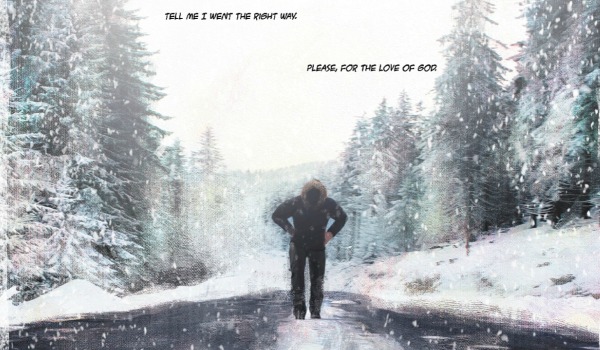 A few moons and several blizzards ago, I reviewed white NOIR, a comic of mystery, suspense and a cautionary tale about driving near deer-infested forests. We recently caught up with writer Matt Garvey to discuss… things. Things of a… creative nature. Prepare yourself for many dramatic ellipses…

AP2HYC: Prior to white NOIR, what was your background in comics?

Garvey: You know you have interviewed me before, right!?

Errrr… I mean white NOIR is something like my tenth small press comic I’ve put out in the last couple of years. I’ve been writing comics for around seven years, but only really putting them out for THERE for the last two years or so. Before that, I was just an avid reader… so I know I bang on about it a lot, but it’s true… if I can make a comic anyone can. People should – it’s so much fun. Hard work, but great fun.

AP2HYC: What was the inspiration behind white NOIR? Can you touch more on the science behind the title as well? Unless that’s part of the mystery too…

Garvey: Whenever I have an idea for a comic, it always stems from a single image, an idea for a scene, a cool twist or even a joke. Then I base a story around that (if I can) or I bank that idea in a notebook just in case I can fit it in somewhere else in another comic later. So, with white NOIR I just had this visual idea of a chap waking up in a car during a snowstorm after a crash with a massive stag head through the window screen. But that was it… I had nothing else. But [artist/co-creator] Dizevez was coming to the end of the first issue of The Ether and I knew I wanted to work with her on this, plus I wanted to give her a break on The Ether because that was her first ever comic, so I didn’t want to burn her out just doing the same comic, issue after issue. Variety is the spice of life and all that.

So, I came up with the completely unoriginal idea of giving James the protagonist amnesia and I thought, I am just going to write it as if I was him… knowing nothing and seeing what happens. This is really unusual for me because I usually plot quite a bit… but it worked. As I started writing I kept coming up with other ideas and twists… then after a few hours the first draft was done and Diz nailed it.

Why the name… well, I wanted NOIR in the title because it is very much a modern-day noir story, but as with the story I had nothing else and then it hit me… it’s set in a blizzard… and snow is well… white. white NOIR seemed to work.

AP2HYC: What most excites you about this series?

Garvey: That I know the ending and you don’t. I have a fantastic twist ending that I don’t think you’ll see coming…

AP2HYC: The cover is so stunning and compelling. Really the artwork through the entire issue is superb. What inspired the cover art and artwork throughout white Noir?

Garvey: The cover had nothing to do with me, that was all down to my amazing collaborator and co-creator, Dizevez. She always comes up with such stunning covers… she has carte blanche when she does them.

With regards to the interior art, I tend to write full script, but I’m not one of those writers who guard their script like its the holy grail. It’s a collaboration and I am more than happy for my collaborators to “tweak” my descriptions to make it more visually interesting. Let’s face it, they are the artists, I’m not, so they are going to have a way better artistic eye than me, plus I want them to put their own stamp on the comic too. The comics I write are as much theirs as mine, that’s why I am not THE CREATOR… I am a co-creator of all my comics, because without the artists I am fortunate to work with all I would have are words on a page. Diz does tend to follow my scripts pretty accurately, with little deviation, but that doesn’t mean that she doesn’t put her own touches in it… Diz is great because she likes to Hide Easter eggs EVERYWHERE. If you look at issue one of The Ether, she had hidden covers to ALL my other comics in there as well as my ugly mug!

AP2HYC: What can fans expect next from you and white NOIR?

Follow the life and times of Matt Garvey here. Have you stumbled upon white NOIR? Tell us your thoughts in the comments or on Facebook or Twitter!