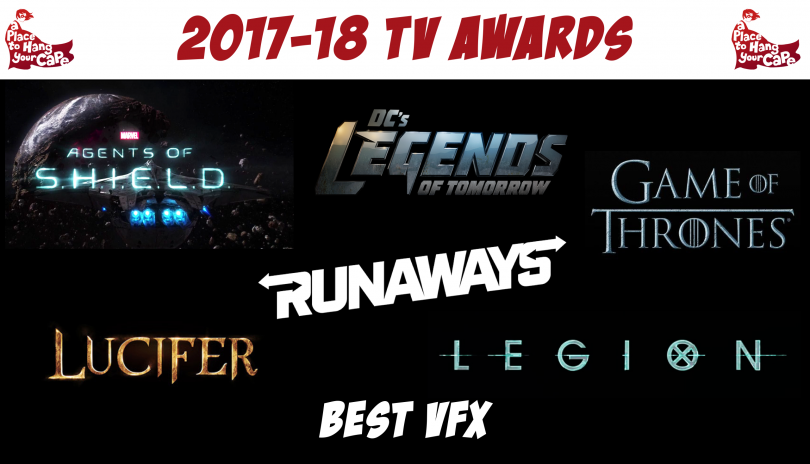 With shows that have aliens, dragons, metahumans, and more, it’s pivotal that the visual effects are as believable as they are interesting to look at. VFX can make or break a TV series and the shows listed below are those that had some of the best visual effects in the business this year. Check out the nominees and be sure to cast your vote for Best VFX!

In a show that has our favorite agents in space, fighting aliens, dealing with powered Inhumans, and handling general mayhem, it’s necessary for all accompanying visual effects to be of the highest quality. Agents of S.H.I.E.L.D. has always done a stellar job at bringing reality to wholly unreal situations, due in large part to the amazing visual effects helmed and supervised by Mark Kolpack. The visuals on S.H.I.E.L.D. match (and often surpass) those of Marvel’s big-budget blockbusters and continue to blow other superhero shows out of the water. Such companies such as CoSA and FuseFX have never failed to create stunning visuals that look real despite the absurd circumstances of the series and deserve major kudos for their work. Check out CoSA’s Season 5 VFX reel below!

With white walkers, flying dragons, and non-existent locations, Game of Thrones has consistently managed to make the world of Westeros feel believable. While this can largely be attributed to amazing costuming, performances, and set design, it’d be ridiculous not to acknowledge the stellar visual effects that have been present since we were first introduced to the Starks, Targaryens, and Lannisters. Game of Thrones has received critical acclaim for years due to the believability of Dany’s three dragons, as well as the large-scale visuals that have aided in making the world feel real. Season 7 proved no different, as dragons literally fell from the sky and miles-long walls crumbled to the ground. Check out RODEO’s and Zoic’s VFX breakdowns below!

A show as convoluted as Legion, with a central character as unreliable as David Haller, is unquestionably going to rely on some extensive VFX work. With so many different realities (rather, non-realities) Legion has room to play with visuals that accurately convey the insanity of the show and the characters depicted in it. With sequences reminiscent of an LSD trip, physical imaginations of non-existent creatures, and a color scheme that shifts at an alarming frequency, the visual effects of Legion continue to entertain and plant viewers firmly in the surreal. Catch some snippets of the stellar VFX work in the Season 2 trailer below!

Without question the most VFX-heavy of the CW line-up, Legends of Tomorrow really upped the ante in Season 3. In addition to dinosaurs, sabretooth tigers, and telepathic gorillas, the third season of Legends of Tomorrow also saw an increase of general (VFX-heavy) action sequences. Combine that with superpowers, frequent time-travel, and spaceships, and you have a series that continues to combine enjoyable scripts with effective visuals, thus solidifying its title as the most fun of the CW’s DC shows.

While the wings and devil-face don’t come out as frequently as they used to, Lucifer is a show that is dependent on its visual effects to sell a generally insane concept. There’s an impressive amount of subtlety to Lucifer’s VFX that (coupled with a fun premise and performances) makes it a wholly enjoyable series week-to-week. What’s especially great about the Lucifer visuals is the fact that they’re used when needed, and never feel overly forced or unnecessary. Click the link to check out some of the awesome work done by CoSA! #SaveLUCIFER

C’mon. If a show has a friggin’ dinosaur in it, it needs to be acknowledged for its visual effects. Marvel’s angsty, teen drama has tapped into fun visuals that do an apt job of mirroring the general tone of the series itself. The visual effects of Runaways create a distinct comic book vibe that makes the series a fun addition to a crowded genre. With VFX that ranges from subtle (classic eye glowing) to downright obvious (SEE: dinosaur) Runaways has solidified itself as another win for Marvel Television.