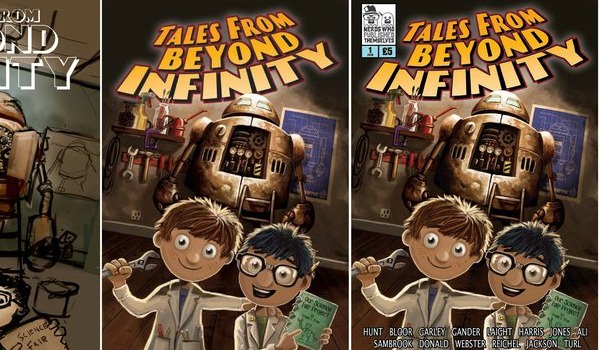 “You don’t have to have superpowers to be a superhero,” so there is hope out there. Multiple small press comic creators have donated contributions for a higher cause: Tales From Beyond Infinity #1, an anthology comic. All proceeds go to the Sue Ryder Leckhampton Court Hospice. The series is dedicated to the memory of John Lawson, who spent his last days in their care. Tales From Beyond Infinity #1 is a labour of love and chock-full of fascinating stories.

The comic goes to infinity and beyond, rounding up short stories from across the universe and uniting them into one tight anthology. Each comic, nine in total, delivers a unique tale with an other worldly aspect about it. Exactly how I described is exactly how abstract that concept gets. The subjects range from a built-to-destroy doll to a cautionary tale of taking school-yard bullying to someone’s spooky home turf. With each selection comes a whole new ball game. Luckily, Tales From Beyond Infinity #1 has some heavy-hitters in its arsenal.

Really, how harshly can someone critique a charitable comic? Thankfully, Tales From Beyond Infinity #1 is such a strong comic in of itself, I don’t have to read like an ass. Each story illustrates the overarching theme of the fantastical meeting words of wisdom/good stories. In the interest of full disclosure, I have reviewed two of the entries in their fully formed comics – Perry Winkle and Midnight Man. So, I could already tell this would be a solid series of stories. The nine comics (plus one without any pictures) have their distinctive identities and offbeat humour. You won’t be able to help but chuckle at the silliness that is The Wages of Sindy and The Red Mask From Mars vs. The Groggling, or marvel at the layout design of Samurai Slasher vs. The Curiosity Charity Auction.

If there are any gripes to be had with Tales From Beyond Infinity #1, they’re microscopic. I’m not in love with the order of the comics. The smaller samples, such as Perry Winkle, get lost in a sea of longer stories. Also, and this isn’t a swipe at the anthology but rather the individual comic, the color transition within The Curious Tale of An Anorak Kid could have been more seamless. It goes from drawings to bright colors almost instantly, and there was definitely an effort for the color to sort of roll in. Again, these are just nitpicks and don’t impact the overall enjoyment I had while reading this anthology.

Snag your copy of Tales From Beyond Infinity #1 here, and learn more about The Nerds Who Publish Themselves too. Sound off in the comments or send us your thoughts on Facebook or Twitter!