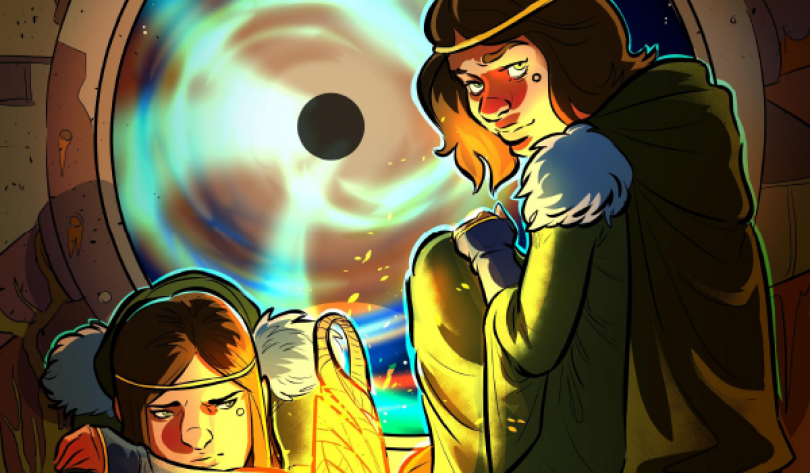 Just about everyone has high school memories of having to begrudgingly read Beowulf in English class. To be fair, the story is fascinating, epic, and exciting, but man, what a slog to get through. Now that I have sufficiently barred myself from ever writing for a literature magazine, you are probably asking why I have brought Beowulf up in the first place. Well, the answer may surprise you.

Cryowulf, written by Sam Roads and currently campaigning on Kickstarter, is a “gender-flipped retelling of Beowulf set on a long-abandonded space station.” At first this seems like a radical departure from the original Old English text, and radical it certainly is, but Roads does a wonderful job of incorporating what made Beowulf epic and memorable into a modern reinterpretation of the tale. 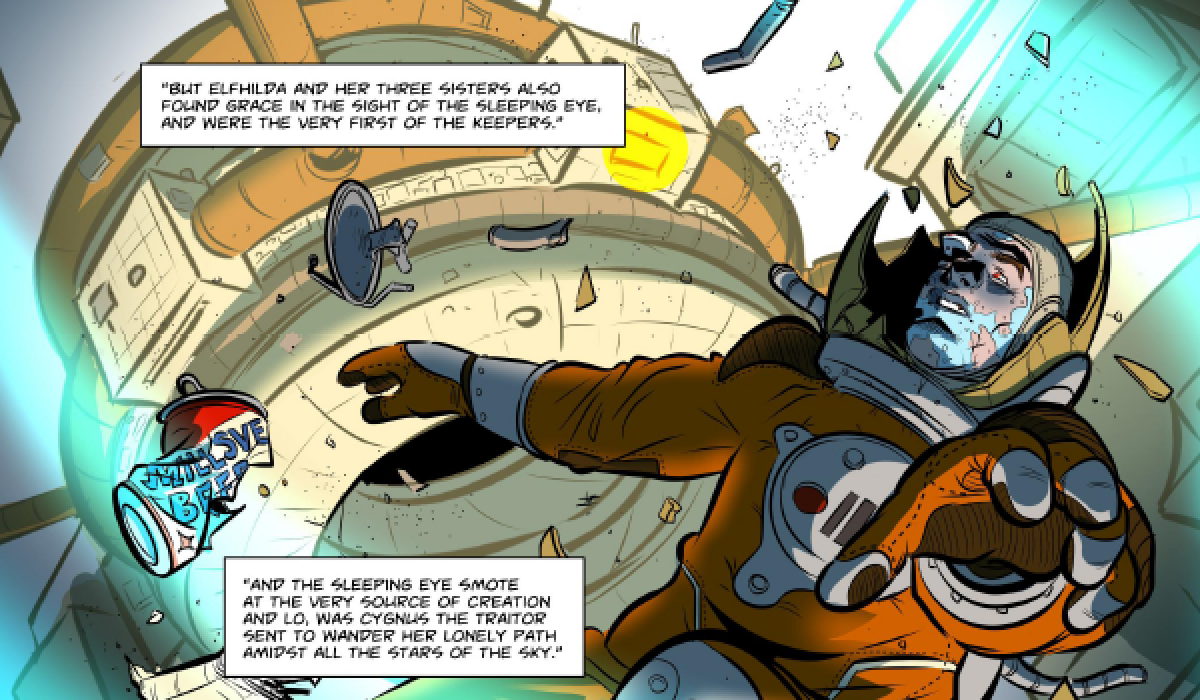 Our main character is Crow, a teenage girl who apprentices under her grandmother, a spiritual keeper on the space station. Crow has bigger ambitions than her duties as an apprentice and longs for the day when Eortha, a folk hero of hers, will reappear to save the station’s population from Grendel, a mysterious monster. Crow’s sister, Raven, is also an apprentice, but takes a more realistic approach to her responsibilities. The sister-to-sister dialogue between Crow and Raven acts as the empathetic glue of this story and keeps the reader grounded throughout all the sci-fi and spiritual exposition.

As Crow continues to deal with the loss of her mother, she, Raven, and their grandmother, Nan, are antagonized by Prime Hawk and her daughter, Falcon. The two of them are as elegant and poised as they are disrespectful of Nan’s responsibilities. Like Crow, Prime Hawk and Falcon appear opposed to the rigid ritualistic norms of this space station. But whereas Crow’s rebellions are out of self-growth, theirs seem purely out of spite. We only get teases of how much power they hold in the station, but I imagine we will see more of them in future issues. 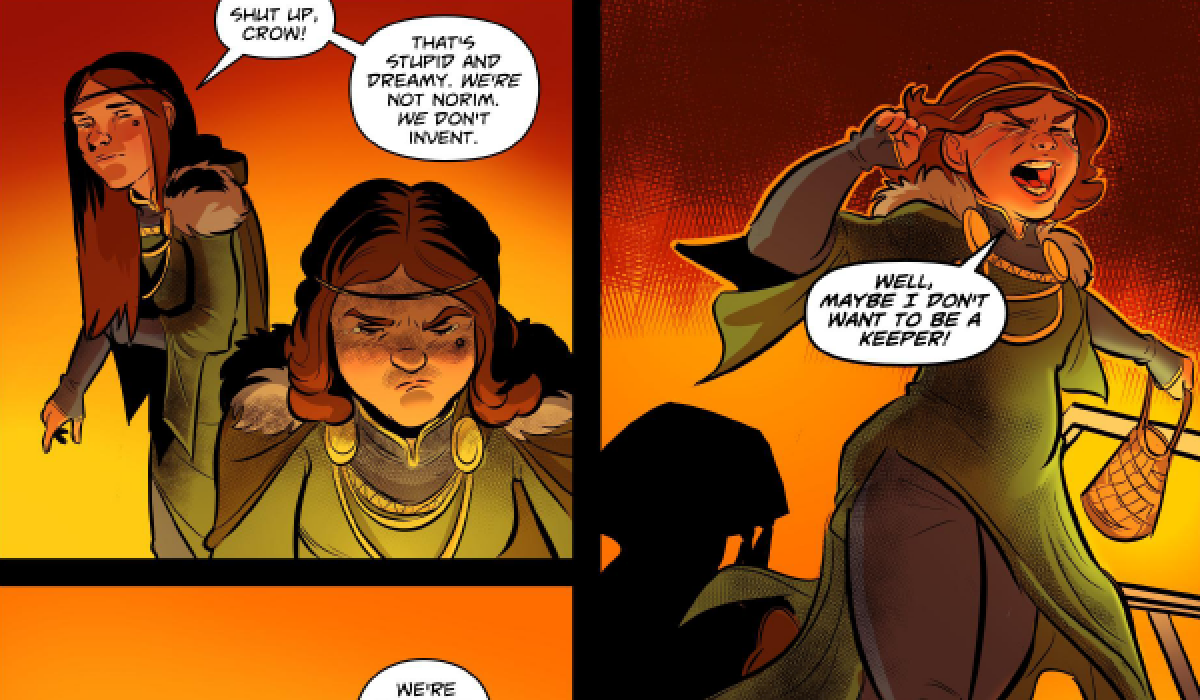 The last main character (without spoiling the ending’s surprise guest) is Puffin, a scout-in-training and friend of Crow and Raven. He makes for a good straight man to Crow’s animated antics, but turns serious on a dime once trouble is announced. Through him more than any other character does the reader get a sense of the constant danger in these characters’ lives.

Plot-wise, that is all I would want to reveal- this is only the first part of a much longer story, after all. But I would be remiss if I did not extol Ben Matsuya‘s wonderful artwork. His character designs are delightfully expressive: Crow’s sense of humor comes through her energetic faces and Prime Hawk’s smarminess is perfectly expressed through a series of smirks and glares.

The sci-fi design of the space station is great as well. I was glad to see a two-page spread in the middle of the book that allowed for more establishing panels of the scenery and goings-on around our main characters. But most importantly is the warmth of Matsuya‘s art. Something about the lighting in this comic, from its range of yellows and oranges to how tightly it shows the station’s many close-knit environments, makes the reader feel only inches away from a homely fireplace. 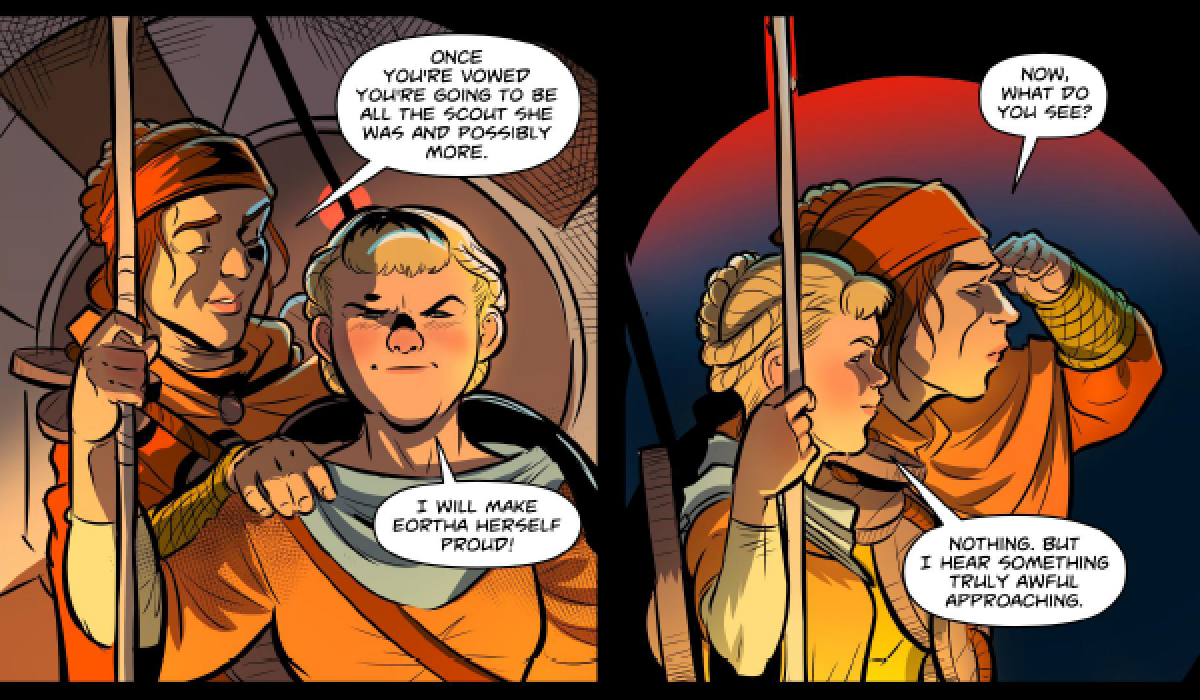 Like with the original Beowulf, I imagine that Cryowulf will ramp up in excitement and action as its story progresses. But for now, I am sold on its setting and characters, especially our protagonist, Crow. Any reader can enjoy this story, with or without knowledge of its source material. But for those who do enjoy Beowulf, or at least remember the B+ essay they wrote on it, one can definitely appreciate how this comic adapts such a consequential text.

Check out my review of Sam Roads’ Silicon Hearts and an interview with Roads himself! What do you think about Cryowulf? What about it sounds exciting? What other books would you like to see adapted in comics? Let us know in the comments or send us your thoughts on Facebook or Twitter!