Home » Trujill0 May be Brief, but it Barks with Glorious Action 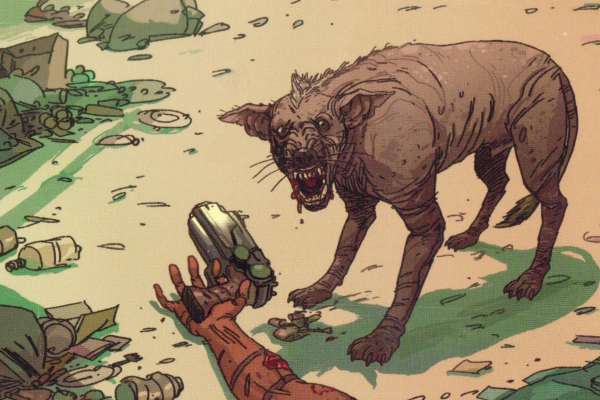 It’s always gratifying when a comic’s contents matches its blurb in every conceivable way, and Gustaffo Vargas‘ Trujill0 is one such read. The back cover of the comic reads ‘A comic about gangsters, shamans, drugs and dogs’. There’s little else to lure you in, but the snapping beauty of Trujillo means that little else needs to be said. Trujillo‘s world may not be the most original, with a premise featuring warring communities reverted to past cultures due to some unnamed dystopia, but Vargas crafts a taught, convincing world for this nimble blitzkrieg of a story to inhabit.

It’s the vibrancy of Trujill0 that makes it a winning read. The comic’s final page is one full of character and vehicle designs, illuminating the indigenous costumes of both faction and the Akira-esque motorcycles our heroes and villains drive. In this section, the comic’s final words reads “It’s a pity we couldn’t see more of these vehicles, but sometimes that’s the way it is”. This story spans no further than this single issue, with the end result being a sugar-rush of pacing and artwork that lends the comic an enjoyable sense of urgency. Vargas sprays Trujillo in an intoxicating mixture of bold, dark colours. Red, green and purple illuminate everything from barren landscapes to high-tech cycles, it’s a mini masterstroke of Vargas to utilise colours with such immediacy within such a compact package. 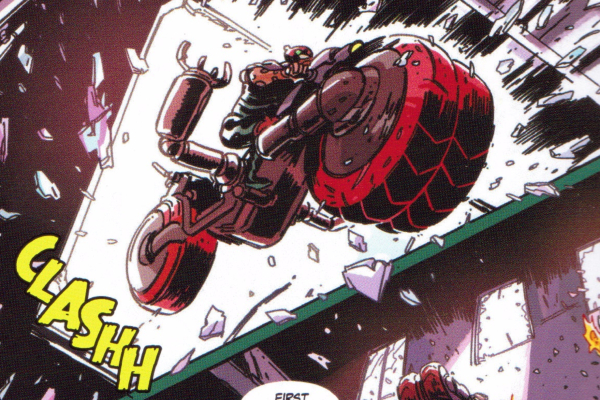 Trujill0‘s story of a group of young, rebel fighters competing with the criminally corrupt Shamans over a mystery package is perhaps the least substantial element of the comic. It’s a two-dimensional affair, but manages to keep a float with a supremely action-driven narrative and a few surprising twists and turns as allegiances between the warring factions become warped. It’s not groundbreaking, but it sure is entertaining, and isn’t without scope. Compliment by Vargas’ detailed depictions of just about everything from neon-soaked cities to emotionally-charged expressions from the characters, Trujillo presents a world that deserves to be explored more.

Trujill0 is a wild ride that packs in thrills and spills from every angle. The buoyant artwork boasts a palpable sense of excitement that threatens to jump off the pages, and the story, while simple, is never mundane. Every conceivable moment where there could be an explosion or a fight is filled with an explosion or a fight. It’s a shame that the comic seems to announce at the end that it will venture no further than this single publication, but there’s still a raucous story to be enjoyed here. That’s the most alluring aspect of Trujill0 – it leaves you wanting more without feeling like you’ve been under served.

You can discover more about Trujill0 from Gustaffo’s online store. Have you read Trujillo? Let us know in the comments section below or send us a Tweet!