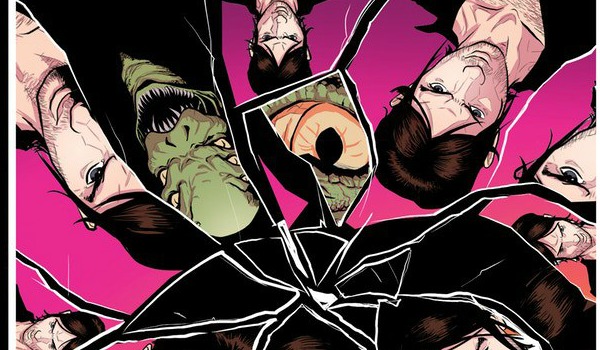 When I reviewed Lizard Men seemingly eons but more realistically months ago, the world was in such a strange place. Really, we should take a few moments of silence to thank the Lizard Men most of us are still alive…

Writer Steven Horry, artist Catia Fantini, and colorist Chiara Bonacini are back baby for rounds two and three in the six part mini-series Lizard Men. Parts two and three chronicle the continued exploits of a rock star turned political leader grappling with the reality it’s lizard people pulling the strings of life. Lizard Men #2 and #3 serve up a delightful continuation of a bizarre yet strangely funny comic.

Lizard Men #2 dives back into the first day of Russell Brand stunt-double/prime minister Dylan Zamani on the job. Well, only technically. After the prime minister says “no thanks” to enslavement, he wakes up in a familiar crack den surrounded by a graphic after school special. One of the titular lizard men appear and lays down the law: bow down, or things or about to get a whole lot more personal. Zamani, of course, gives a more expletive response, and the lizard men crank up the heat. Zamini is then left questioning who’s really on his side and who’s a lizard person in disguise. It’s just another day in politics…

Wow! What a nice thing to read.

Have you been enslaved by Lizard Men? Lay down the law below, or on Facebook or Twitter! 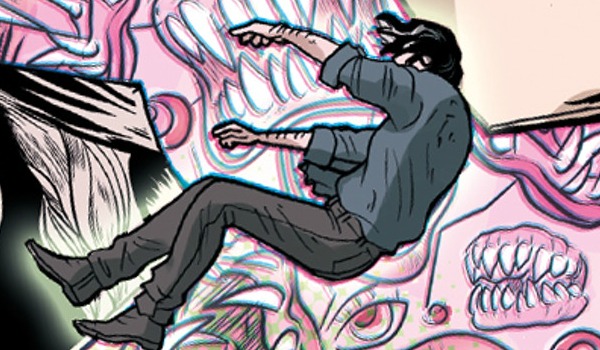 Oh wait, I should probably say some more things.

The story itself is very funny and especially zany. I find it hilarious that this master species is constantly being outsmarted. It’s not as if Zamani is some master manipulator. He’s the guy who says exactly what he’s thinking and feeling. He’s truly the best guide readers could have on this wacky adventure. The second and third installments of the comic also build on Zamani as a character, giving him a little more depth beyond his initial brash and flash attitude.

However, I do wish the second issue stays with Zamani more than it does. Additionally, there’s a mysterious woman introduced who has a connection to the lizard people but comes with a similar brashness as Zamani. These parts slowed the pace of the comic down, but I’m sure her role will enlarge in the war to come. The problems that do surface pale in comparison to the whelming positives Lizard Men have in its back pocket. Although, I can’t confirm if lizard people have back pockets. Or front pockets for that matter.

Artistically, Fantini and Bonacini once again bring their own brand of cleverness and fun to Lizard Men. The design elements that worked so well in the inaugural issue are back full throttle. One thing that benefits the artwork greatly this time around is that the tone for the comic is more defined as darkly humorous. The art only adds to that bonfire. Weird as it is, my personal favorite art design are way Fantini and Bonacini craft punches. Just from the way they’re drawn, punches in this world must feel like a shot in the belly with the amount of damage they inflict.

There is one aspect of the artwork that’s driving me up the wall. We finally see a lizard man, in the flesh, human shell dissolved in a creepy fashion, and it doesn’t even look like a lizard! You could argue the face does, with a few eyeballs to spare. When this particular character (I won’t spoil who) reveals their true identity, they look like some hybrid, tentacled praying mantis. That was a tad disappointing and distracting, but didn’t ruin my overall enjoyment. Only the lizard men can do that.

In my first review of Lizard Men, I ended with the thought that I was curious for the next chapter. After reading issues two and three, my initial curiosity has evolved into full-blown excitement. Each issue does a great job at leaving readers dangling off a cliff, excited for what’s to come next.

Adopt the rules and regulations of Lizard Men issue #2 here and issue #3 here. What are your thoughts? Do you think the lizard men have pockets? Sound off in the comments or send us your thoughts on Facebook or Twitter!