Home » The Hans Showcases a Strong Introduction But Weaker Follow-Up 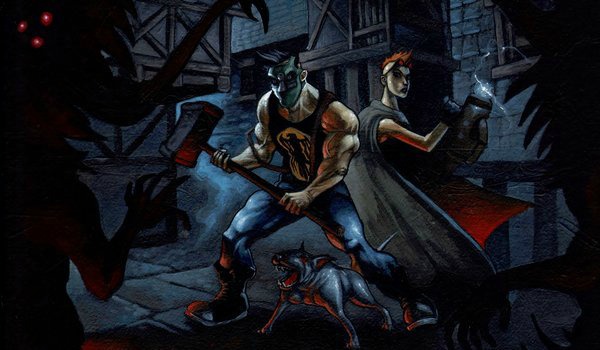 When the world has got you down, sometimes you just need an escape. Who could imagine escapism taking on a whole new reality entirely. Bruno Stahl imagined. And he plopped that idea down on paper to create The Hans, a four-part graphic novel series. While the first issue of The Hans boasts its brute strength, Stahl neglects to bring the same energy and spirit to its second outing.

The introductory issue of The Hans begins at the end of the world. Strange, parasitic creatures with a hunger for infection rule the roost. An enlarged German with a war hammer named Hans and his trusty dog Hellmutt are two of the few survivors. In the midst of chaos, the comic cuts to the life of young Arthur, a boy with a large imagination and a even larger life problem – his dad is dying. But that’s not stopping him from throwing himself into his graphic novel about a post-apocalyptic world where a German strongman and his canine companion must fight to survive… However, the two worlds are on a crash course towards collusion. How the two will play with one another is yet to be seen.

The transitional sequence bridging Hans and Arthur is beautifully done, both narratively and artistically. The pan out from the action in Hans’s world, to the actual drawing of Hans, then ending with the introduction of Arthur engrossed in his notebook at the hospital will pull on even the coldest reader’s heartstrings. One of the more intriguing elements at play in The Hans series is the connection between both worlds. My gut reaction after reading the first instalment was this would be a story within a story, that Hans is all imagination. It seems Hans operates in a dimension all on his own. The same goes for Arthur. Consider my curiosity piqued.

When it comes to pacing, while the first issue of The Hans goes in for the kill quickly, its follow-up favors a slower, more painful death. The second issue spends a great deal of time with secondary characters. The issue opens with a sacrificial ceremony of characters who are slaughtered two seconds later. Meanwhile, readers get to chat with Arthur’s aunt and her friend-zoned hipster pal. It really serves no purpose other than to give her exposition. This narrative choices feels odd because from the first issue, it seems Stahl enjoys teasing readers. He hints at the imminent collision between Hans and Arthur; he (initially) dances around the aunt’s absence in Arthur’s and his dad’s life. Overall, the second issue does little to advance the story of both Hans and Arthur.

Much like the two broken worlds of Hans and Arthur, there is a great divide between the first and second issues of The Hans, artistically speaking. The landscapes and characters of Hans’s dimension are rich, vivid and painted in a very visually-appealing manner. Ironic, seeing as how he’s in a complete nightmarish hellhole.  It’s a stark contrast to Arthur’s black and white life. While different, both styles feel natural to the stories they’re in. Again, as with the story itself, it will be interesting to see these two styles converge.

This great divide to which I am referencing involves the distinct artwork between each installment. In spite of the strong artwork within the first iteration of The Hans, the quality did not transfer seamlessly into the follow-up. In the second issue, Arthur’s story harbors many a empty space whereas in the first, bare spots will filled with shading to balance out images. Even Hans’s ironically exuberant world of the first issue is dimmed in its second. They aren’t obnoxious differences, but to read both issues back-back, it was disappointing to see the quality of the artwork did not carry through.

Ultimately, The Hans has a lot to offer, but it needs to retrace its steps. It’s an intriguing premise, but where issue number two leaves off, it didn’t leave me as excited for what’s to come as, say, reading the first issue. Hopefully, The Hans finds its footing and recaptures the spirit of the first installment. Otherwise, parasites might eat the series inside out.

Have you survived The Hans? Buy your copy here, then sound off in the comments or send us your thoughts on Facebook or Twitter!