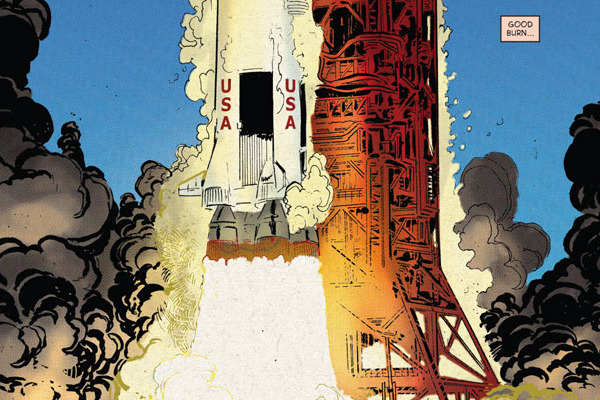 Comic book documentations of real-life, historical events are almost a sure-fire way of gauging fresh perspectives on well-tred stories, because a comic book documentation is the last thing on people’s minds when preserving a person or event of historical significance. The Apollo program, from 1961-1972, has been the subject of countless depictions on the big and small screen, its successful result of putting 12 men on the moon across five separate Apollo missions continues to provide a seemingly endless amount of inspiration for story-tellers.

Two such storytellers are Matt Fitch and Chris Baker of Dead Canary Comics, who have teamed up with artist Mike Collins duo to deliver a darkly meditative, often downright surreal, depiction of the Apollo 11 mission, the most recognised era of the Apollo program from 1969. For all the years the Apollo program spans across, and for the even more years it’s impacted science, fiction and beyond, Chris and Matt keep the narrative deceptively simple here. Apollo spans Neil Armstrong, Buzz Aldrin and Michael Collins‘ efforts in journeying to the moon, from rocket launch to the moon landing itself – that’s it. There’s no complex probing of sorts going on in Apollo, it’s a celebration more than an examination.

That’s not to say that Apollo is lacking in substance. That would be a foolhardy objective when you’re writing about one of the most substantial scientific achievements from the last 70 years. Weirdly, Apollo finds some of its emotional beats in the characters back in Earth, the relatives of Neil, Buzz and Michael. Elsewhere, Collins lends the remaining emotional beats to Apollo via his splendidly eerie depiction of outer space and the moon. 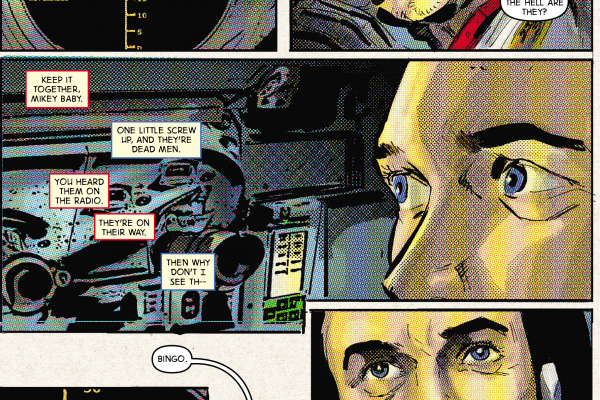 Fitch and Baker takes some heavily recognisable emotions and runs with them as a launch pad for Apollo to blast off from. Families worried for their husbands’ journey, fathers begrudgingly dispensing approval of their history-making sons, and Neil, Buzz and Michael’s own tense relationship in delivering on their mission. All of these mini-dramas are given room to ponder on as we trek across the stars, and stand at odds with the immense human achievement the trio of astronauts go on to accomplish. However, those achievements are played with both reverence and cool detachment at the same time. Fitch and Baker lets the emotional beats slip into Neil, Buzz and Michael’s journey, leading to some odd yet alluring quasi-psychedelic breaks from reality. The depths of space themselves become exploited as an exploration for moods and feeling to resolve uneasy relationships and things left unsaid between loved ones.

Collins’ artwork stands as the most muscular element of Apollo. Landscapes fall between the psychedelic and the cosmic, but the human element in the characters is never forgotten. Collins’ shapes his characters with the warm tension that ripples across Apollo‘s pages, giving the drama a tangible punch.

Once that punch evaporates, you’re left feeling a little underwhelmed. Apollo is a comic focused squarely on pondering over moods rather than exploring facts. Any new interpretation of a real-life event should be welcomed, for it presumably houses fresh intel that separates it from past incarnations. Apollo however fails to feel as though it paints any fresh perspective on the Apollo program, even if its well-intended emotional beats are exquisitely crafted for the comic book medium. Even with that lack of factual grit, Apollo sticks in the mind as a vastly gorgeous read.

Matt, Chris and Mike will be revealing the secrets of working on Apollo at this year’s Thought Bubble Festival with that Q+A session on Sunday the 23rd of September. You can discover more about Apollo from SelfMadeHero. Are you already a fan of the comic? Let us know in the comments section below or send us a Tweet!