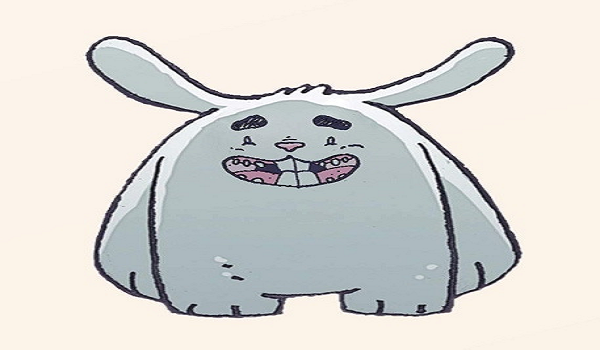 Bun is an all-ages comic book adventure. Written by Mike Sambrook, drawn by Rosie Packwood, and lettered by Rob Jones, Bun will be premiering on Sept. 22nd at Thought Bubble UK.

I always enjoy reading all-ages comic books, but this one is particularly adorable. The artwork is colourful and eye-catching enough to match the tone and route of the story itself. The design of Bun is likeable and easily reminds me of Hayao Miyazaki‘s My Neighbor Totoro’s title character, Totoro.

The narrator is not the main character of this story but rather, the narrator is telling the story of the character of Bun, a half-breed bunny. We get a little back-story about Bun’s early life and eventual decision to move to the city. In the city, he immediately runs into trouble and has a meeting with a fighting promoter.

The first issue is simple and to the point to draw us, the readers, in to wait answers to a whole bunch of question that popped up in this issue. The story itself is very reminiscent of the premise “the Ugly Duckling” and classic coming-of-age stories when someone leaves home for greener pastures. I like a good coming-of-age story about the underdog or the kind person who goes against the flow of things.

There are two characters, one unseen and one seen. The unseen character is, of course, the narrator telling the story of Bun. I’m not quite sure how reliable this narrator is because I was promised ninjas on the first page and I don’t know how there will be ninjas by the end of the issue. There had best be ninjas in later issues! The use of the unreliable narrator or at least, a narrator who misdirected readers, is always interesting. Supposedly, we will meet the narrator when Bun meets the narrator.

Bun is a non-speaking half-breed bunny. I’m not sure what a half-breed is in the context of this world, but they seem to be reviled. Bun is kind, but big and strong. He’s got good protective instincts. In terms of a main character for an all-ages adventure, I like Bun tremendously. He’s a sweet, wholesome character, who inevitably will be tricked and used by the mean world and that will be sad.

This first issue was a set-up issue for the primary conflict for Bun and teasing things to come in the future like Bun meeting the narrator. As good introductions do, it leaves readers with more questions than answers. Any world-building in the world featuring Bun and the other half-breeds shall be quite interesting.

Bun, this all-ages adventure is an easy read and enjoyable. I think anyone would like to gift it to the little ones in their lives or get a copy for themselves. Check them out on Kickstarter. Or visit them at Thought Bubble UK 2018! Let us know what you think so sound off in the comments or send us your thoughts on Facebook or Twitter!