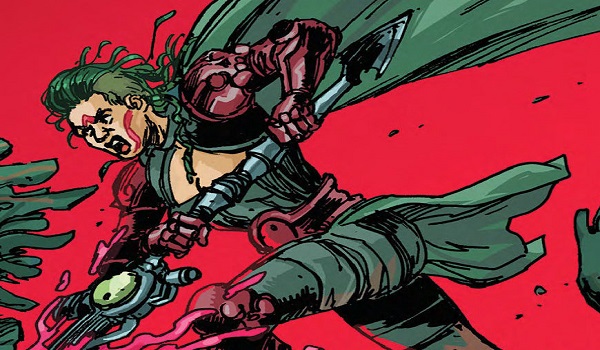 This year’s Thought Bubble Festival will be premiering a lot of amazing works by talented writers and artists.  I get the chance to preview one of the comics debuting at the festival. Papercuts and Inkstains Presents: Circadian Rhythms by Michael Sambrook, Gustavo Vargas, and Rob Jones is a 13-page one-shot comic centring on a fantastical clash between humans and dragons.

Circadian Rhythms is an easy read. It has a beginning, middle and an open-end for possible future stories. It does not go the way you expect. Everything happens quickly within the pages. The black and white art helps with the ease of reading the events. Sometimes one-shot stories become clunky with dialogue to bring more exposition to it, but this story does not. It adheres to the “show, not tell” rule of writing.

The dragons in this story is very interesting. I love dragons in all forms, so it’s fun to see them almost like ancient insects. These dragons are not your typical dragons, so something happens within the pages that makes you think for a second about how that was possible! The appearance of the dragons was the only time I wished that the comic was in colour.

As it is a very short story with the possibility of continuing, there was one important character. The heroine is the mysterious warrior woman named Gytha. She is the connecting figure between the past scene (?) and present day scene (?). According to the last page of the comic, she is “Gytha, weapon of the monks of Wepre, based in Castle Ewloe.  Age–timeless. Guardians of the mortal world against the scourge of Dragons…Badass.” This is blurb is how we find out her name as it is not mentioned throughout the comic. She’s immensely cool.

When she arrives at a place with a dire warning, things go sideways for bystanders. She finds those willing to become warriors. Gytha is, by far, the most interesting character as the other character have two-dimensional personalities. I hope that there will be more one-shots featuring Gytha and her world.

Lastly, the other character of interest is the bar-maid/tavern maid Elisa who Gytha deems worthy to lead the others against the dragons. Elisa took her new charge with great courage, which I appreciate, as she managed to lead the others well. And the characters that were unlikable were immensely unlikable but very standard for fantasy stories (the bragging but useless so-called warrior and the bratty child).

Ultimately, any fantasy fan will enjoy this story, although if they like clashes between human warriors and dragons then they are going to want this to be more than a one-shot. Gytha and her story definitely has the basis to create an amazing series.

Circadian Rhythms premieres for sale at Thought Bubble 2018 and will be online the following day on Madius’ website. Let us know what you think. Sound off in the comments or send us your thoughts on Facebook or Twitter!