Home » Possession #1 Boasts Strong Characters and a Lot of Confusion 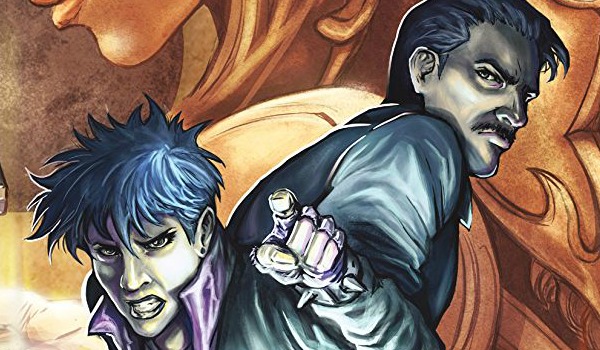 Sex, drugs, rock and roll, and… Greek mythology? Add a bowl of guacamole and you have yourself a party. Writers Michael Norwitz and Mary Ann Vaupel have banded together with artist Enrico Carnevale, colourist Andrea Blanco, and letterer HdE to create Possession #1. The comic intertwines the lives of people from all walks of life, from a cat-obsessed but definitely not sexually repressed wallflower, to a punk rocker with lion-level bravery and literal Gods literally screwing each other over. And over. Despite strong characters and some fantastic artwork to boot, Possession #1 spends too much time focusing on setting up a series rather than an engaging first issue.

Possession #1 plops readers in the heart of Santa Mira, a troubled city bustling with dark mysteries. Poor office worker Javier Sanchez is sucked into a coworker’s potential scandal. From there, he, his cohorts and fellow residents must contend with their own assortment of weirdness. Their stories are woven through the impassioned love affair of Greek gods Aphrodite and Ares, hinting to readers that things are about to get even stranger.

The most powerful element Possession #1 has is the colourful cast of characters. The comic devotes a lot of time to individual introductions, and it really does pull the reader into the story. If only these characters had something to do. The trouble with Possession #1 lies within the plot, or severe lack-of. Clearly, the first issue’s origin is to set up the entire series. However, Norwitz and Vaupel introduce the characters (again, in a pretty fantastic fashion) and most of them don’t do anything. We meet them, then move on to someone else. The only character remotely driving the plot is Javier, but he serves to go talk to new characters. The pacing is too slow, and sometimes, the amount of exposition dialogue bogs things down further. While the present-day characters have trouble brewing, the Greek Gods have something worse in store.

Even Gods have problems, and with the mythology story, they have two big ones. The first involves the storytelling itself. The residents of Santa Mira and the Greek Gods are tied to one another. Somehow. Reincarnation is the most likely suspect. In any case, that disconnect keeps readers at an arm’s length, or at least those readers interested enough in scouring for a connection between the two. Possibly the most bizarre portion of the comic happens towards the end, when one character is having a meltdown. Suddenly, she’s talking to a girl ghost. How does this relate to anything? Is there a God who has ghosts on his speed dial? A few pages later, ghoulish thugs show up. These supernatural elements come into play only at the end. Narrative choices such as this create more questions. I myself love a good mystery, but I’m more confused than curious.

Narratively, Possession #1 relies heavily on the parallel between the modern day storyline and the Greek God retelling, however, the artwork for each throws that attempted unity off balance even further. Artist Carnevale and colourist Blanco create vivid, dimensional characters and landscapes for the present day stories, but it’s missing from the God retelling. The backgrounds are plain; every panel looks as if its painted in a dull, brown glaze. Also, the characters look flat, to the point where Mr. Game and Watch or Paper Mario would feel at home (hopefully not during a sex scene though. My childhood probably couldn’t withstand that orgy). If I had to guess, the inspiration for these designs comes from a marriage of hieroglyphics and stained glass windows. But, that’s only more questions.

Ultimately, Possession #1 boasts strong characters and artwork for a huge chunk of the story but falls short in plot and it’s mythology storyline. It will probably age well, meaning the two stories within its pages will become more clear in terms of their connection. Possession #1, at this point in its life, isn’t concerned with connecting the dots, and that may turn potential fans off permanently, or it may not. Hopefully, the comic doesn’t keep readers in the dark for too long as to what the hell is going on. Otherwise, they may need to consult their personal ghost girl.