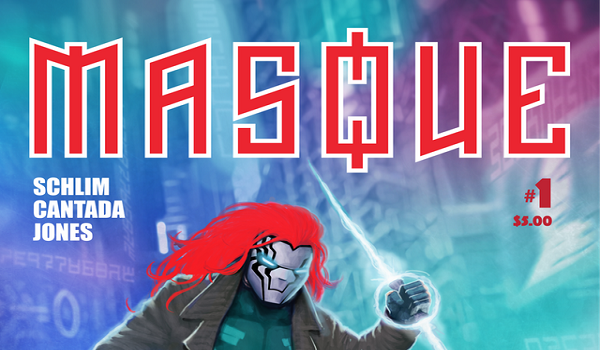 Masque Issue #1, created and written by John Schlim Jr., was brought to life through Kickstarter last year and deserved every penny it got, with stunning art by Ev Cantada, and lettering by Rob Jones. If you’re eager to get a feel for the cyberpunk world of Masque, there’s also a well executed video for you to enjoy!

Masque follows David Atlas, a beleaguered and mentally unstable journalist who also just so happens to be the titular masked vigilante. The setting of the cyberpunk distant future is rife with corruption thanks to unsavoury politicians and capitalists, murder and kidnapping, class divisions, and so forth. The world is so relevant, it’s actually sort of scary. But probably the most unique aspect to this comic is cyber-mysticism which is the merging of science and magic and serves as the core conflict. We do want to note that this comic does contain scenes of nudity, so this comic may not be appropriate for young readers. In addition to setting up this unique world, we also dive into the core mystery of the series which involves a serial killer/kidnapper whose victims are all women. The mystery expertly leaves readers on a cliffhanger that will force them to want more.

As far as main characters go, David Atlas is both interesting yet familiar at the same time. While there are plenty of stories and comics that feature mentally unstable vigilantes or Jekyll and Hyde situations, Atlas is completely unique. He can function as a notable journalist while also combating what appears to be split personality disorder. He is completely aware of the changes and actively works to stop becoming Masque. We can already see the building blocks for great storytelling later down the road. The second main character, known as Mysterious Patient 2251XM, must struggle to survive while having little to no memories of the events surrounding her capture. As she attempts to put the pieces of her capture together, it becomes clear that her fate is intertwined with David and possibly the serial killer.

Our one complaint of this issue is the jarring nature when we shift from David’s point of view to Mysterious Patient’s. While it will certainly get easier with each issue, it may be difficult to pick up on for a first time reader. As mentioned earlier, the artwork is amazing, with a clean and professional look. This art could easily be mistaken for a DC or Marvel comic. The colours chosen perfectly reflect the serious nature of the story.

Overall, we really love the first issue of Masque. The world building is fascinating. The story is intriguing. The art is great. And the characters are extremely likeable. We certainly can’t wait to see what happens in the next issue. If you’re a fan of cyberpunk or a good old-fashioned thriller/mystery, then this story is just for you.

You can discover more about Masque from Ovation Comics. Be sure to check it out and let us know what you think in the comments below or send us your thoughts on Facebook or Twitter!