Home » Hiding in Plain Sight: The Skrulls in Captain Marvel

Captain Marvel has been taking the world by storm since its release on March 8th (listen to the episode of PodCapers or read this review by junior editor Jillian Diblasio). The movie introduced a staple of the cosmic Marvel Universe—the Skrulls. The direction that it took for the Skrulls was surprising and interesting  But some people may not be familiar with the Skrulls and what this new direction could mean for the MCU in comparison to their comic book origins. Please be aware that there are spoilers for Captain Marvel going forward.

The Skrulls were created by Stan Lee and Jack Kirby, first appearing in 1962’s Fantastic Four #2 as an enemy for the First Family of Marvel.

Skrulls are shape-shifting aliens who are the mortal enemies of the Kree Empire.  In modern culture, shape-shifting tends to be associated with evil largely because of its deceptive nature. The Skrulls have been featured in various storylines over the years including The Kree-Skrull War, Annihilation, and, of course, Secret Invasion. Make no mistake, the Skrulls are nasty buggers in the comics.

In the context of Captain Marvel, we are initially introduced to the Skrulls through the point of view of the Kree who view the Skrulls as barbaric murderous enemies. However, we then learn at least one faction of the Skrulls led by Talos (played by Ben Mendlesohn) were actually refugees trying to find a new home far away from the genocidal Kree Empire. The Skrulls’ home world had been destroyed many years ago, forcing them to search for a new one. This search for a new home ultimately becomes the reason Captain Marvel was MIA since 1995 in the MCU. 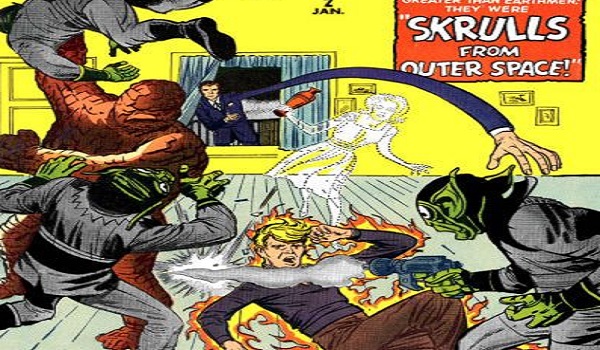 While Marvel seemed to spin the Skrull’s portrayal in Captain Marvel, at the same time, it is important to remember that one faction of the Skrulls does not account for all the Skrulls. Certainly Talos, his family, and the refugees he led were just trying to make the best out of a horrible situation. But we don’t actually know how many Skrulls are left. Since they are refugees, smaller groups would be safer to stay out of anyone’s radar. In theory, there could be malicious Skrulls.

However, no matter what, because they would still be refugees, Skrulls will be perceived differently compared to other villains because the audience can sympathize with them. We understand the need for a home, for a place to belong, a place for safety, security and happiness. Most of the standard MCU villains follow a more traditional villain track (except Loki and Thanos, both for different reasons). Having sympathetic villains would be a nice change of pace from the normal MCU villain fare.

What can this mean? Will we be getting a Secret Invasion storyline? Will another group of Skrulls be a future enemy of the Avengers or the Guardians of the Galaxy?

To be honest, I was expecting Marvel Studios to lay foundation for Secret Invasion or have a bigger twist at the end of Captain Marvel, but the Skulls being more sympathetic was nice too. The expanding MCU into the cosmic setting with Captain Marvel can take us in any number of directions. With Avengers: Endgame just around the corner, I’m sure that Marvel Studios are waiting to release any future names and dates of movies for the summer.

What did you think about the Skrulls in Captain Marvel?  Let us know in the comments or send us your thoughts on Facebook or Twitter!