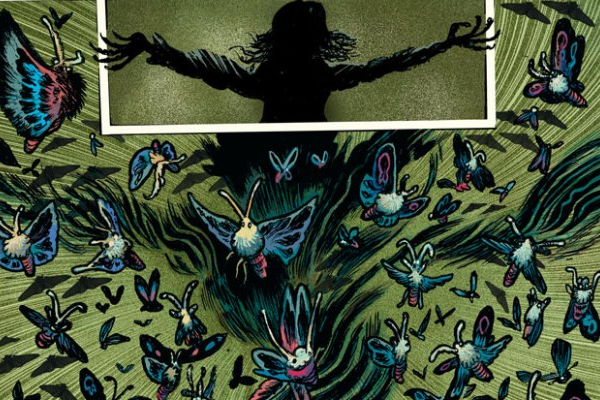 There’s something sickly about Lip Hook. Each page turn is an unnerving experience; you’re never quite sure what’s going to greet you as you dive deeper into a community that’s best left alone, detached from the outside world. David Hine‘s curious exploration of rural British culture is illuminated by Mark Stafford‘s grotesque, immersive artwork. Their combined artistic and narrative powers results in a comic that deftly balances the line between caricature and warning of a very English sort of fantasy culture.

Lip Hook is confident in its uncertainty, it’s exploration of long-forgotten cultures wrapped around a story that’s enveloped in mystery and suspense. That powerhouse feel is surely derived from Hine and Stafford’s past collaborations. Lip Hook marks their third comic that dives into cryptic, rural tension, following their adaptation of The Man Who Laughs and The Bad, Bad Place, currently being serialised in Soaring Penguin Press’ Meanwhile… anthology.

Stafford’s gloriously murky artwork feels like a reflection on Hine’s narrative themes of the breakdown between reality and fantasy. Lip Hook‘s story initially focuses on a pair of outsiders, on the run after committing some undisclosed crime, and camp out in the forgotten town of Lip Hook. Already a strange settlement, Sophia and Vince’s arrival triggers an uprising of secrets and rituals long-since forgotten. Such is the bizarre nature of Lip Hook however, that it feels as though its inhabitants were already on the verge of insanity before Sophia and Vince show up. 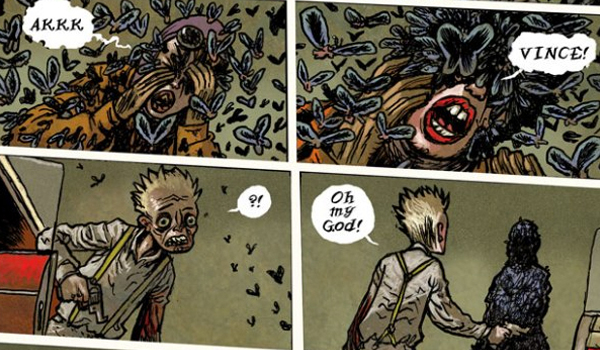 Lip Hook‘s freakish landscapes are riddled with tension from beginning to end, and they’re a wonder to behold. Stafford’s art is brash in structure and intoxicating in colour. Lip Hook‘s players are intensely caricatured thanks to their bulging expressions. The comic’s colours are muddy, swamp-like, reflective of the fearful, one-eye-kept-open nature of the story that unfolds. Hine’s narrative compliments the artwork with its passionate rattling through the exploits of this stiff upper lip sort of countryside, fantasy cult.

If Hammer Horror produced a movie based on The League of Gentlemen, it would look something like this. It’s a deliriously strange, unsettling read that’s nevertheless a riot. Like the comic’s mythical, siren-esque figure that drives the town’s inhabitants to stir up old legends with disastrous consequences, Lip Hook sinks under your skin and nestles there, imprinting a darkly comical aftertaste. It’s a delightfully gruesome entry in Hine and Stafford’s growing joint bibliography of the weird and wonderful.

You can discover more about Lip Hook from SelfMadeHero, as well as learn more of David Hine’s and Mark Stafford‘s various works. Did Lip Hook manage to dig under your skin? Let us know in the comments section below or send us a Tweet!