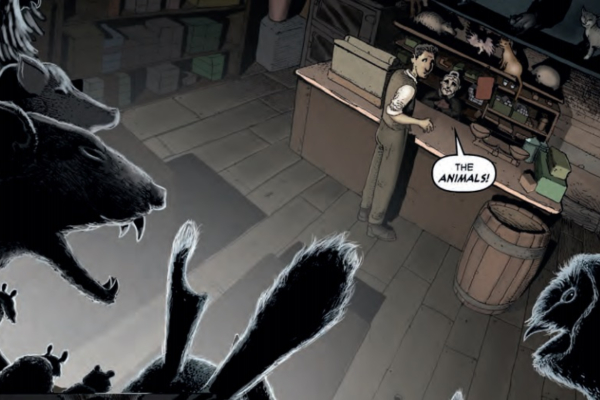 Mad Robot Comics is no stranger to delivering intriguing indie titles laced with a darkly quirky sense of humour. We’ve found their previous work, including Cadavers and Last Exit to Brighton, to be full of topical themes and plenty of rip-roaring action.

The indie publisher is now taking its latest title to Kickstarter; Frank at Home on the Farm. Co-created by writer Jordan Thomas and artist Clark Bint, with Mad Robot Comics head honcho Matt Hardy serving as editor, it promises to be their most deliciously darkest comic yet. Frank at Home on the Farm tells the cryptic, unnerving story of a solider who returns to his family home after the Great War, only to discover his family missing, and no-one in the neighbouring village having heard of them.

We caught up with Jordan to find out more about the comic.

A Place To Hang Your Cape: Why did you want to bring Frank At Home On The Farm to life?

Jordan Thomas: Frank at Home on the Farm is a story I’ve had with me a long time. I wrote the original draft a decade ago and it’s been one that I’ve always come back to. It’s the type of story I like reading or watching myself. Something a bit different, weird, unsettling. I love a good superhero blockbuster but I’d love there to be more room for stories that take a risk.

In terms of ‘why now?’ it was when I saw Clark’s work that it just clicked for me that he was the person to do this with, although what he’s delivered for this first issue is beyond even my wildest expectations when I first contacted him.

I’ve contributed to other comics in the past, but Frank at Home on the Farm is the first one I’m the sole writer on, so it feels right that it’s such an important story to me.

AP2HYC: There’s a definite hint of psychological horror running through the comic. What other themes may be lurking within the comic?

Thomas: Yeah, the psychological horror is certainly upfront and centre. When Clark and myself were discussing the idea in the beginning there was a lot of talk of isolation and purposefully cutting yourself off from the world despite the harm it does you, which without wanting to get political… well… you know.

There’s also a lot around the damage severe trauma, in this case war, can leave behind on a person and how burying these things only causing it to affect you in other ways.

And of course the real reason behind making the book, which is to warn people to never trust farmyard animals. They will get you eventually.

AP2HYC: Are there any particular inspirations behind the comic?

Thomas: Well, the original inspiration is actually really weird. I was watching Richard Linklater’s Before Sunrise late one night. A kind of bittersweet romance. And at one point this guy tries to get the main characters to come to a play where he’s playing a cow, but not a normal cow, one that sits at the table, reads the paper and drinks coffee. For some reason this sparked a whole story in my head about a man coming back to an empty farm and being tormented by the animals as he becomes more and more isolated.

In terms of more tonally similar influences… The Shining is a big one. I’m a huge Stephen King fan and the Overlook Hotel is such a dominating presence in that book – in Frank at Home on the Farm we have ‘the barn’.

Jacob’s Ladder is another. It deals a lot with trying to re-adapt to society after being at war.

In the comics world I love Wytches by Scott Snyder and Jock and Locke & Key by Joe Hill and Gabriel Rodriquez. Both so inventive and atmospheric. 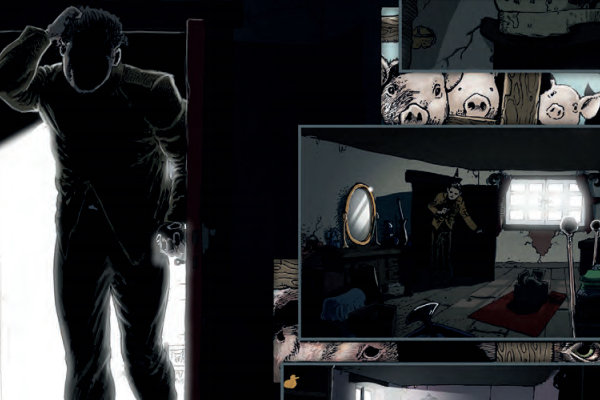 AP2HYC: What’s it been like to work with co-creator Clark Bint, visualising your story together?

Thomas: Well Clark is just the worst…lazy… No, I kid. I really couldn’t have asked for a better collaborator than Clark. What I love is how engaged he is with the story. I know other very talented artists who deliver great work but they don’t think much about the story.

I gave Clark the script to read before we started anything and he came back with so many amazing visual ideas to really drag the themes out to the surface. Visual metaphors. His layouts are out of this world. I’ve given him a lot to do in some pages and he always finds a beautiful way to tell the story.

It can get lonely as a writer so having an artist who wants to discuss ideas and will throw interesting stuff back at you really makes the creative process a lot of fun. He can also draw a bit.

AP2HYC: You’ve previously written for Mad Robot Comics’ Cadavers anthology, how does working on Frank At Home On The Farm compare to past works you’ve written on?

Thomas: I did indeed write a couple of stories for the anthology. I guess it’s different muscles. For the anthology I was working within someone else’s world. Having fun with their toys. It was great fun, but I guess you’ll always have that more personal connection to something that is 100% you, and of course with that comes much more stress as if it doesn’t work out it’s all your fault!

With Frank at Home on the Farm specifically compared to other work I’ve written solo, just the fact that I know this story so well makes it a little different. I’ve been tweaking sections in my head for a decade, and the characters just feel so real to me. It means a lot.

You can check out Frank at Home on the Farm on Kickstarter, and discover more about Mad Robot Comics online. Have you already backed the comic? Let us know in the comments section below or send us a Tweet!