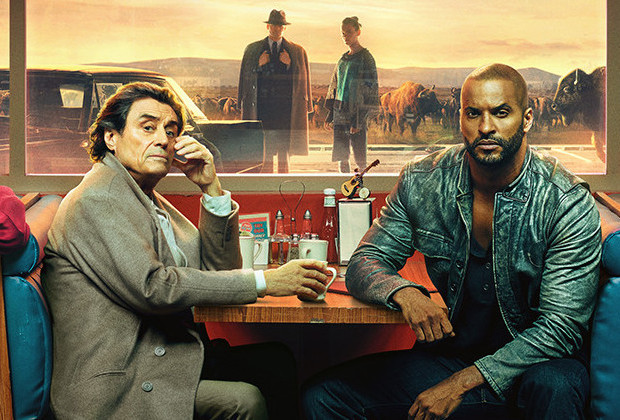 The Starz-Fremantle production, American Gods, based on Neil Gaiman’s fantasy novel of the same name, aired its beleaguered second season with little fanfare. Dwelling in the shadow of Game of Thrones, this once vivid and extraordinarily dreamy show is a shell of its former self. Despite a great ensemble, a good storyline, and an interesting world of myths, American Gods’ behind-the-scenes bickering has turned it into a false idol. But, there may be some good things in this underwhelming show.

Just about all of the problems come from a shoddy production. The first season was run by Michael Green and Brian Fuller. But, the bickering between Starz and Fremantle executives, budget fights, and Neil Gaiman wanting the series to be closer to the book, eventually led to Green and Fuller getting the heave-ho. Thus, the show looked, like its titular gods, that it had no future, with the second season hanging in limbo. Actresses Kristin Chenoweth and Gillian Anderson both quit the series in protest to the showrunners’ sacking.

The second season’s production sounded even worse. The producers installed Jesse Alexander as showrunner, likely because he would be easier to control. Alexander’s time was rife was contempt and more bickering. Green and Fuller had written most of the season’s scripts, but they were chucked out, and replaced with, well, nothing. The production was delayed by several weeks, Alexander’s own scripts for the finale were rejected, and even the actors had to improvise their own dialogue, forcing Orlando Jones to be credited as a writer due to the WGA’s rules. Eventually, Alexander himself was fired himself, leaving producers to steer the sinking ship.

The lack of concrete scripts halfway through the season leads to a lot of filler. A majority of the cast are relegated to one location, with the old gods waxing their sanctimonious gums about belief. Thankfully, the talented cast do pull this off with panache. The plot is also a bit more confined to the flow of the novel’s plot, forgetting or just downplaying the first season’s finale.

For the uninitiated or the forgetful, the story follows Shadow Moon (Ricky Whittle), an ex-con released from prison after his wife Laura (Emily Browning) has died in a car crash. He is hired as a bodyguard by charismatic grifter, Mr. Wednesday (Ian MacShane), who is actually the Norse god Odin. Wednesday is trying to kick off a war between old, forgotten gods and America’s newer gods, who seek their destruction. It’s a war for belief in a “land without gods”. Meanwhile, Shadow discovers Laura has been resurrected as a living corpse thanks to the lucky magic coin of the leprechaun Mad Sweeney (Pablo Schreiber). There are many colourful old gods, whilst the new gods are small, consisting of the creepy Mr. World (Crispin Glover), the rude Joffrey-esque Technical Boy (Bruno Langley), and the charismatic Media (Anderson).

The first season ended with Wednesday convincing Easter (Chenoweth) to declare war on the new gods by removing spring from America. But, then, that little storyline got dropped in the second season, reduced to a mere issue in one state. Instead, Shadow, Laura, Wednesday, and Mad Sweeney travel to a fascinating roadside attraction called the House on the Rock. Here, a pantheon of old gods meet to discuss whether or not to go to war. The gods show their true ethereal selves in perhaps the season’s most spectacular moment.

After some meandering, everyone’s goals are put into motion. Wednesday seeks out the repair of his spear Gungnir, as well as acquire the seedling for the world tree Yggdrasil. Laura and Sweeney head to New Orleans to ask Baron Samedi (Mustafa Shakir) to resurrect Laura properly. And, Shadow…he just hangs around the funeral home of Egyptian gods, reacting to things, and not really doing much. Elsewhere, Mr. World and Tech Boy move into a secret, retro, government bunker to plot out their next moves against the old gods. Due to Gillian Anderson’s departure, Media is gone, but is reimagined as New Media (Kahyun Kim), personifying digital media and internet culture. Aside from exploring Tech Boy’s origins, the new gods mostly hang out in the bunker, with Mr. World being delightfully eerie with his speeches about power and fear.

Both factions are a variety of whimsical characters, even the douchebag Tech Boy has a weird likeability about him. But, the biggest drawback is Shadow Moon himself. In the book, he is your standard average joe who reacts to things, and isn’t all that interesting. Whilst Shadow had a minor arc about belief in season one, he has nothing to do in the follow up. This man has been lynched, seen his wife come back from the dead, and is on a road trip with gods, and his reaction is just a blank, bored expression. Ricky Whittle has nothing to work with, though it might be because of the missing scripts.  I know this show has a bit cast of larger than life personalities, but making the hero boring doesn’t help things. The drama with Laura goes nowhere, since they only have about two scenes together in the season.

Ian MacShane continues to be a riot, having several different travelling companions to bounce off of, aside from dreary Shadow. He even brings a more humane side to him, beyond being a manipulative, cunning liar. The best episode of the season is the sixth, focusing on Wednesday’s vaudeville days with his son Donar (Derek Theler) and Columbia (Laura Bell Bundy), the old personification of America. The episode’s story is played out as a slow burning, unfolding tragedy, where Wednesday shows a more vulnerable side for once. Every actor brings their A-game to their individual roles, presenting these ancient gods as angry, complicated, and surprisingly tragic beings, despite being your typical asshole gods.

By far the most compelling performance comes from Orlando Jones as Anansi, the West African spider god. Though appearing as a suave, slickly-dressed older gentleman with a sharp tongue, Anansi is a very passionate and enraged god; bursting into eloquent speeches about how his people have been mistreated and dehumanized in American culture. A great example of this is his speech to Thoth (Demore Barnes) and Bilquis (Yetide Badaki) about human trafficking, and the rebranding of slavery for African-Americans. Fittingly, this show addresses a lot of the truth about American culture and society than most news programmes do. 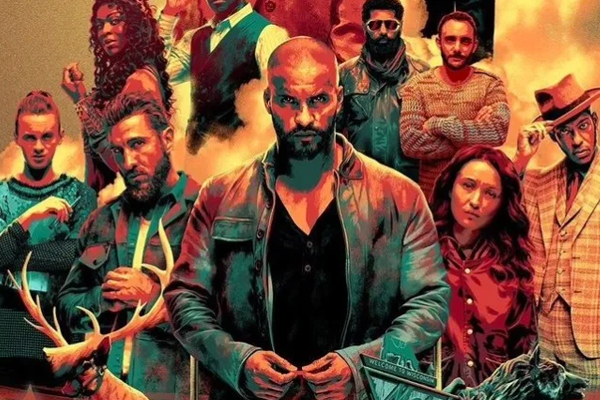 I almost forgot to mention the reunion between Salim (Omid Abtahi) and the fire-eyed Djinn (Mousa Kraish), who had a one night stand in the first season. Salim proceeds to be the Djinn’s sidekick, and for Wednesday to have someone else to mock and insult. Salim is quite an interesting character: being a gay Muslim in love with a creature considered demonic in his culture, but despite being in the company of gods, he can only accept Allah as one worthy of worship. The characters do discuss and question Salim’s own beliefs, but never really go with it. Salim doesn’t really get much focus this season, and the character he did have friendships with are elsewhere. He and Shadow, both characters who have troubles with belief and faith, have little interaction with each other.

We meet many more gods, old, new, and taking neutral positions, though most of them are bit parts, but it helps to expand the world a little more. Kali, the Hindu death goddess, appears as Mama-Ji (Sakina Jaffrey), who works in every diner and motel in America, offering blunt words of wisdom to whoever needs it. Two key characters from the book, Mr. Town (Dean Winters) and Sam Black Crow (Devery Jacobs), appear in minor roles, but are so utterly wasted, they could’ve been replaced with other characters.

In the New Gods, things remain quite fun. Crispin Glover is at his best here, Mr. World teetering on the edge of lunacy, and is very creepy. Tech Boy gets a lot of backstory here, though he doesn’t really change as a character. New Media is a bit of a cipher. Though meant to be the evolution of Media, she doesn’t really have a definitive personality. Instead she personifies Japanese media, to the point of wearing a high school uniform and cat ears like a pop idol. She comes off as a lesser female vagrant of Tech Boy. Her establishing moments involves her “interfacing” with the grotesque Argus Panoptes to steal his powers of surveillance.

Perhaps the most renowned element of American Gods was its fantastic visuals and hypnotic tone. Green and Fuller brought about the first season with mesmerising imagery like nothing seen. Now, the second season comes along, and tries to replicate the style with little success. Most of the copycat imagery involves showing how things work in slow motion, but there is the occasional cool shot or visual. The road map of America is a nice touch, and again, the Hall of the Gods in the opening episode is still brilliant.

With the lack of another showrunner, the third season could be up in the air for a long while. If they want to please the gods and improve the quality of American Gods, they should hire a reliable new showrunner, or just bring Green and Fuller back. Or, like the old gods in this show, they will lose worshippers (or ratings).

What are your thoughts on the second season of American Gods? Does it deserve a watch, or should it be forgotten like the old gods? Leave a comment below or on our Twitter and Facebook feeds.