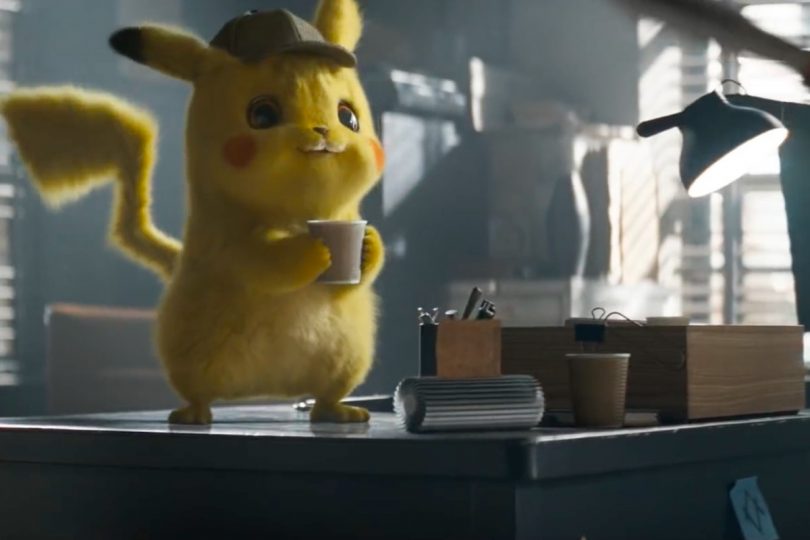 Trying to adapt video games to the big screen is no easy task. Occasionally it works like with Mortal Kombat, Silent Hill, and Rampage, and now, Detective Pikachu joins those few nuggets in the mud. This is the first live action excursion into the Pokémon universe, though not the first Pokémon movie – the anime has twenty-two of those. It is the first released worldwide by Warner Bros. in fifteen years, and is by far the best video game movie made. Granted, the bar isn’t really set that high. What is most interesting is the direction that director/co-writer Rob Letterman decided to take this long desired theatrical release.

Instead of trying to create a traditional Pokémon film, featuring the expected training, catching, and battling, Letterman instead based the movie on an obscure title released two years ago named Detective Pikachu. A mix of Zootopia meets Who Framed Roger Rabbit, Detective Pikachu is an action-comedy-neo noir that happens to be set within the world of Pokémon. Whilst the battling gameplay could work as a sports films, the decision to focus on a set protagonist was a good call. A lengthy journey across a country, catching Pokémon, battling, winning badges, and taking on the Elite Four needs more than one film.

In truth, it is a breath of fresh air going to see a Pokémon movie which is focused on something completely unrelated to battling. The normal gaming elements are featured, but downplayed, the movie set in a brand new location where such Pokémon-related culture is illegal. Our hero is Tim Goodman (Justice Smith), a jaded, wannabe Pokémon trainer who travels to Ryme City upon learning his estranged father Harry, a cop, died in a car crash. The city, founded by the disabled Howard Clifford (Bill Nighy), has banned Pokémon battles, but the creatures live in harmony with the citizens, serving in civil citizens roles or as pets. The cops use Growlithe and Arcanine as police dogs, a Machamp is used a traffic warden, etc.

Tim encounters his dad’s partner, Pikachu (Ryan Reynolds), who he can somehow understand, and vice versa. Pikachu is amnesiac, so the two reluctantly work together to discover the truth behind Harry’s last case and his alleged death. Tim and Pikachu uncover a conspiracy involving a deadly chemical that turns Pokémon feral, leading them to a top secret laboratory where Pokémon are illegally experimented on, and a certain powerful psychic Pokémon, whose presence that the trailers gave away. The duo come to terms with their loss, whilst aided by junior reporter Lucy Stevens (Kathryn Newton), whose job as an unpaid intern with lofty ambitions feels very real. Ken Watanbe shows up as a police lieutenant, though doesn’t really have much to do in the plot, though his Snubbull is quite cute.

Speaking of which, the highlight has to be the Pokémon themselves. Brought to life with fantastic, semi-photorealistic special effects, the Pokémon are everywhere, and whenever they are onscreen, background or not, your eyes are drawn to spot which ones are present. It’s the ultimate version of the old “Who’s that Pokémon?” from the anime. Pikachu looks especially great, his new furry design and expressive face, backed by Ryan Reynolds’ performance, make him immediately likeable. It isn’t the first time our favourite Pika-pal has spoken English, but this is probably the best. I certainly found a stronger connection to Reynolds here than I have for both Deadpool movies.

Unlike other films, the Pokémon maintain their recognisable appearances without undergoing mass changes to look more realistic. There is the rare moment where there is a slightly off-putting or freaky design (i.e. Aipom), but nothing that takes you out of picture. The finer details on the Pokémon are lovely, likely Charizard’s scarring from a previous fight with Pikachu. Seeing a brief Pokémon battle in a slightly more realistic setting was cool and yet thought-provoking, making one wonder what such battles would be like a more grounded world. Pikachu’s dialogue doesn’t always match his rapid mouth movements, but again, it is a tiny nitpicky detail.

The chemistry between Justin Smith and Pikachu is great and really drives the movie. Occasionally, some Deadpool-style quips are thrown in for a laugh, but this doesn’t define either Pikachu or Reynolds’ performance. He is a caffeine-addicted film noir P.I., who uses sarcasm to hide truly lonely existence. To everyone aside from Tim, Pikachu speaks in the usual Pokémon manner, voiced by the character’s long-term actress, Ikue Otani.

Detective Pikachu can appeal to a lot of people, though primarily at fans of the franchise. Older fans will get all nostalgic, whilst the kiddies and newcomers will get hyped out seeing all of their favourite Pokémon in live action. There are plenty of tiny details, memorable callbacks, and Easter eggs that will definitely call for repeat viewings of the movie. From Cubone’s tragic backstory, to the use of the anime’s theme song, and spotting various Pokémon in the scenery. The one downside is that the film may ostracise general audiences with Pokémon, an issue that has always plagued this franchise’s movies. It is a jovial and fun noir film, with a heavy reliance on neon lights, and the Pokémon even fill the archetypal roles of noir characters. Mr. Mime in the role of an informant is one of the film’s highlights, playfully twisting the role with great delight.

And those Bulbasaur are so damn adorable, I just wanna take them home and hug them til I die!

Did you enjoy Detective Pikachu? Was it a great film, or a total disappointment? What other live action Pokémon films would you like to watch? Leave a comment below, or on our Twitter and Facebook feeds.