Home » Horror Imagery and the Short Story Craft: In Conversation with Sprouting and Other Tales of the Curious Writer Asa Wheatley 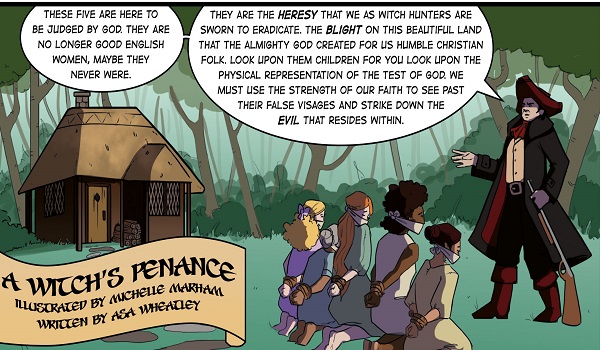 If you’re a fan of horror, speculative fiction, anthologies or short stories, you’ll love Sprouting and Other Tales of the Curious. The comic is currently crowd-funding on Kickstarter, and is a 40-page comic anthology written by Asa Wheatley.

He also wrote Tails of Mystery (with art by Kat Willott) and joined Scott on PodCapers to talk about this very anthology. Each short story, drawn by a different artist, had the talents of Sammy Ward, Michelle Marham, Kat Willott, and Emma Graveling.

We were delightfully intrigued by Sprouting and Other Tales of the Curious, and we caught up with Asa to talk through the specifics about the comic.

A Place to Hang Your Cape: How did this anthology project come to life under your guidance?

Asa Wheatley: The craft of a short story/comic is something that I think every writer needs to learn. The ability to tell a compelling story in just a few pages is one of the most valuable skills a writer can have.

Creating indie comics is also incredibly time-consuming, as a writer I find I’m always coming up with new ideas or pitches to myself but there’s no way I’ll ever be able to create all of these stories as full length comics or series. So I thought what better way to tell multiple stories than to combine all these ideas into an anthology. That way I could write a few short scripts and then the artists could all work at the same time.

So the final result is still a full length comic in this case 40 pages but it’s completed in a quarter of the time.

AP2HYC: Each of the stories in Sprouting and Other Tales of the Curious is done by a different artist.  What is it like to work with a varied group of artists and in what ways did the artists add to the project?

Wheatley: It was fantastic. It really helped me grow as a writer, figuring out exactly what each artist needed from me to get the best possible art from them. I think having a different artist on each of the stories also gives them their own identities and picking the right artist is key to telling the story. Every artist will tell a story in a different way and that can impact the pace and structure of the story as well as how it’s communicated to the audience.

For this anthology I was lucky enough to work with a fantastic team of artists. They all brought something different to the stories they were involved in and I couldn’t be happier with what they’ve done.

AP2HYC: How do you think short story comics balance imagery and words to tell a story?

Wheatley: Balance is the key. If the story is too text heavy, it can hide the art. Like film, comics have a big show don’t tell mentality but I think refining this in short comics is much harder as you’ve got less space to tell your story and it can be easy to try to fill the panels with exposition text but this can turn a reader off. You’ve got to hook the reader right away, preferably on the first page and I think this is best done with a combination of important and captivating art and words on the opening page.

AP2HYC: What are your favourite horror writers or speculative fiction writers? Did any in particular inspire the stories in Sprouting and Other Tales of the Curious?

Wheatley: H.P. Lovecraft’s writing has always been an inspiration to me but I wanted to steer clear of the more traditional tentacle monsters and old gods that Lovecraftian fiction tends to lean towards. I love the way that his writing creates this foreboding sense of dread and loss of sanity. While it’s not present in all the stories the short comic Hanging in the Darkness is a particular homage to his works. I wanted to create a story where the narrative unfolded though snippets of information the reader has to put together themselves. And I was drawn to the idea of having the opposing stories of the images and the text.

Scott Snyder’s incredibly well known for his work on Batman and at DC but his horror work like American Vampire, Wytches and Severed are all books that I think are not talked about enough. Snyder’s horror is definitely an inspiration to me and while it might not have directly influenced a single story it has influenced my writing greatly.

AP2HYC: Do you have any other future projects in the works that we can look forward to seeing?

Wheatley: Yes, along this anthology I am working on the noir comic series Tails of Mystery with artist Kat Willott, who also worked on the anthology. We’ve released two issues so far and I’m currently working on the script for the third. As well as that I’m planning a second anthology later this year with a more traditional horror focus as camp counsellors tell scary stories around a campfire.

Check out Sprouting and Other Tales of the Curious on Kickstarter, now in its final few hours! Did you already pledge? Let us know in the comments or send us your thoughts on Facebook or Twitter!