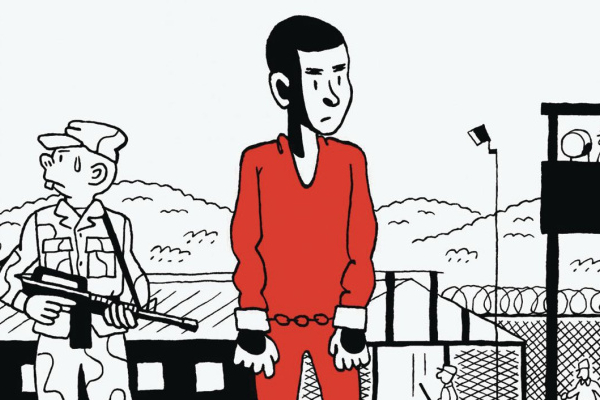 SelfMadeHero can always be counted upon to deliver a brutally honest comic biography. Whether it’s Tillie Walden‘s tender exploration of her early years in Spinning or Andrzej Klimowski and Danusia Schejbal‘s account of working as artists in a restrictive Eastern Europe in Behind the Curtain. Now, SelfMadeHero has delivered its most personal and riveting biography to date, one filled with horror and hope. Guantánamo Kid: The True Story of Mohammed El-Gharani is a relentlessly raw depiction of Mohammed El-Gharani‘s false imprisonment in Guantánamo Bay for his suspected yet ultimately untrue involvement in the 9/11 attacks. The weight of the time and effort stolen from El-Gharani in proving his innocence radiates across the comic.

Written by Jérôme Tubiana and illustrated by Alexadre Franc, Guantánamo Kid is riveting in how painfully drawn-out it is. The abuse El-Gharani suffers at the hands of America’s imprisonment system is shown in abundance. The comic begins in an optimistic fashion, tracing El-Gharani’s journey travelling from Saudi Arabia to Pakistan in order to study English. Once 9/11 occurs and he is captured however, Guantánamo Kid becomes less of a story and more of a prolonged montage of torture. The racially-charged hatred subjected to El-Gharani is difficult to stomach, with Tubiana and Franc sparing no expense in showing what he went through. 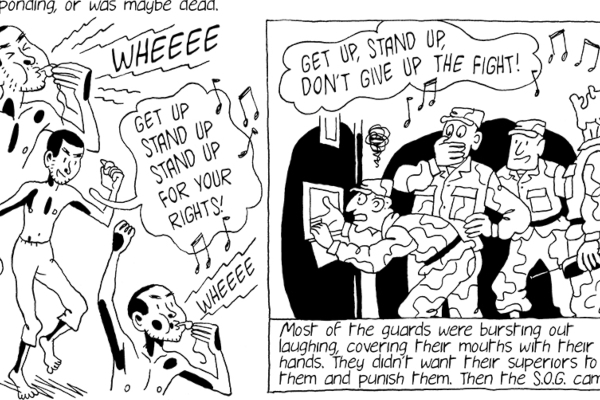 Making the comic accessible is Franc’s nimble artwork, which focuses greatly on character expressions and interaction. He gives Guantánamo Kid an immediacy that’s pleasing to the eye but retains the horrors of the overall story. That itself is an odd creative choice for the comic. At times, it feels like Franc’s art borderlines in being downright lighthearted. The often caricatured depictions of the Guantánamo Bay staff scuppers the menace the comic shows elsewhere. Franc’s art is often at its best when it shies away from scenes of torture and settles into more reflective moments for El-Gharani. His narration, guiding the reader along, makes for empathetic story-telling.

A striking aspect of Guantánamo Kid is how it doesn’t end when El-Gharani is finally proved of his innocence. His retaliation against the prison’s abusive set-up is thrilling to watch unfold, but once he’s released, his journey doesn’t end there. Despite having his freedom cemented, El-Gharani continues to not be allowed to return to Saudi Arabia. Tubiana’s narrative and Franc’s art proceed to swell together in crafting an unpredictable, jungle-esque environment for El-Gharani to venture in, as he drifts helplessly from city to city across Chad and Sudan, struggling to find work and, ultimately, a peaceful life. It’s a bittersweet end to the comic that highlights the dire effects of false imprisonment. 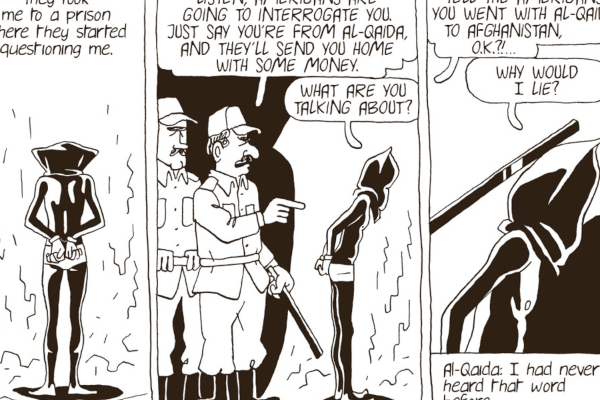 Guantánamo Kid‘s tale of abused youth escalates into a wider comment on Guantánamo Bay’s state as a failed system. It makes you ponder as to how many more prisoners have been in the same position as El-Gharani, locked up for a crime they didn’t commit. It’s an unsettling comic, at times utterly heartbreaking, but it’s also a hugely important and necessary read.

You can discover more about Guantánamo Kid from SelfMadeHero. Have you already read the comic? Let us know in the comments section below or send us a Tweet!