Home » How Ms. Marvel Can Be Incorporated into the MCU 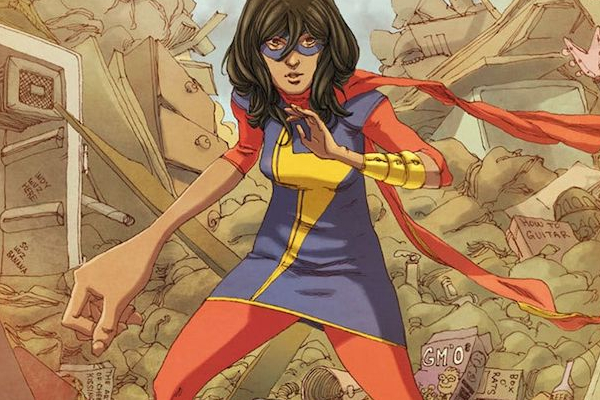 As part of the slew of Marvel announcements, this year’s D23 revealed Ms. Marvel will be getting her own show on Disney+!  I’m so excited, it almost makes me want to get another streaming service to watch it. Ms. Marvel is teenage Pakistani-American Kamala Khan of Jersey City, New Jersey. She is the first Muslim-American superhero to headline her own comic book.

So now that Ms. Marvel will be joining the MCU officially, there are a lot of questions to be answered, especially how they will incorporate her into the expansive universe.

The Inhuman and Kree Connection

Ms. Marvel is an Inhuman with the ability to “Embiggen.” Considering that Inhumans was a big flop, I am wondering how they are going to handle how her powers awakened. In the comics, Kamala’s powers were awakened by the Terrigen Mist after the “Inhumanity” storyline. This allowed Marvel to create a bunch of new characters, including Kamala Khan.

As the Inhumans were created as a result of the alien Kree experimentation on early homo sapiens, millions of years ago in Earth’s history at the beginning the Kree-Skrull War, it would be best to focus on the Inhuman-Kree connection. The Kree are, after all, the bad guys of Guardians of the Galaxy and Captain Marvel. Instead of the Inhumans, the Kree could be the cause of the Terrigen Mist to be spread throughout Earth, post-Endgame. This would allow the connection between Ms. Marvel and Captain Marvel to be even more emphasized as both were affected by the actions of the Kree.

There’s nothing more I want to see in the upcoming shows and movies is how the world is recovering for life after the events of Avengers:  Endgame.  Certainly, we got a good look at the world without Iron Man in Spider-Man: Far From Home, but that was a more personal take as it focused on how Peter Parker/Spider-Man was dealing with the loss of his mentor.

I would hope that all the upcoming shows and movies will be set after Endgame. Through Kamala’s story, we would be able to see the widespread effects of both Snaps.

Was Kamala’s family affected? How were the communities in Jersey City affected?

Unlike the Netflix Marvel shows which were nebulously connected to the MCU, I expect Ms. Marvel will be more obviously set in the same world. This show and the others have a true opportunity to show the far-reaching consequences of previous films.

As the Netflix shows were really the only look into street-level heroes, there’s now a lack of focus on smaller, but no less important matters. Ms. Marvel, as a teenaged-hero, will be more focused on local crime. Therefore, I think that will be a nice shift in the MCU. While I’m all for cosmic-and world-shattering events, the local, close-to-home heroics should be more appreciated. As our other teenage hero may no longer be swinging about the MCU, Ms. Marvel can be the first introduction to other young heroes.

The charm and reliability of Ms. Marvel’s comics come from her struggle between her life as a superhero and the other aspects of her life. She is a daughter, a friend, a Muslim girl from a Pakistani immigrant family, an American teenager, a high school student, etc. I want to see her group of friends and their struggles. I want to see her bad guys disrupt life in Jersey City.

I have high hopes and expectations for this series. There’s nothing more I want than Ms. Marvel‘s Disney+ show succeeding and being wonderful. I hope that those creating the show lean heavily on the original creators (G. Willow Wilson, Sana Amanat, Adrian Alphona, Jamie McKelvie and Stephen Wacker) of Ms. Marvel/Kamala Khan to really bring her to life on the small screen.

Do love Ms. Marvel? Do you also have high expectations for the upcoming Disney+ show? Let us know your thought in the comments or on Twitter!