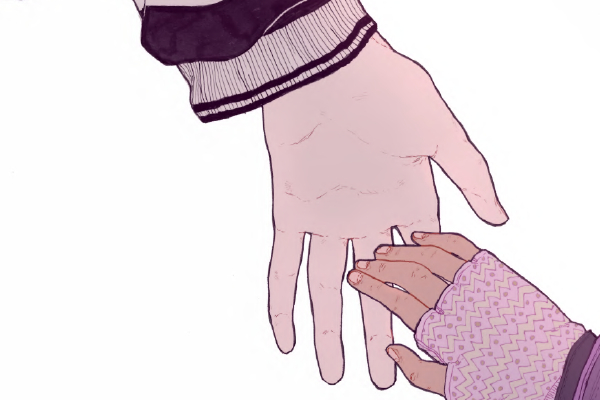 The first three panels of Zoe Thorogood‘s autobiographical recount of depression and grief transmit its sombre, unflinching premise with cold, heartfelt effect. Zoe is a relatively new voice on the U.K indie comic scene, but with Angel, she’s already marking out her territory as an emerging voice to listen to. Angel captures a moment in Zoe’s life when her thoughts of suicide are scuppered when she’s forced to prevent a runaway 4-year-old girl from being run over on a busy motorway, resulting in the two’s shared experiences striking a chord with each other and helping each other overcome their grief.

The simplicity and the colours of Angel are its most arresting aspects. With its story clocking in at 8 pages in length, Angel restrains itself from being an overwrought probing of family loss and suicide. Instead, it grasps a few snapshot moments that alter perceptions on self-worth in the aftermath of loss. Zoe experienced these moments when she was 15, and only committed them to sequential form 5 years later. Angel gains a tender undercurrent by its youth-driven narrative, of two voices inexperienced, and yet forced to experience so much hardship in life already. Plucking from these real-life experiences, Zoe crafts a brave, yearning, even somewhat funny exploration of how youth comprehends grief. 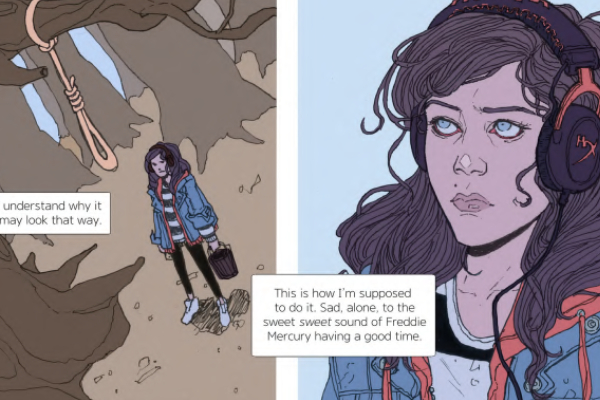 The colours of Angel are where its emotions and overall message of wrenching hope from loss are most succinctly telegraphed to the reader. Throughout the majority of the comic, Zoe makes use of a particularly cold palette of secluded colours, reflecting the bleak nature of the narrative. The comic’s woodland setting feels reflective of autumnal vibes, as if things are coming to an end. It’s one of the less subtle tools at Angel‘s disposal. In the comic’s penultimate two pages, the visual mood shifts to a different beat. The colours morph from the dominant cold yellow and blue to a warmer and sweeter sort of orange. The woodland setting vanishes entirely, allowing Zoe and the comic’s other characters to not just stand in the openness, but be comforted in a supple, creamy orange glow. It’s a move that reflects the successful detachment of the darker themes Zoe’s ensnared by, yet the lightness of the colour suggests a vagueness, as if the process of grief isn’t a linear one that can be completed within 8 pages. It’s an ongoing process that Zoe communicates in a handsome, elegant fashion. 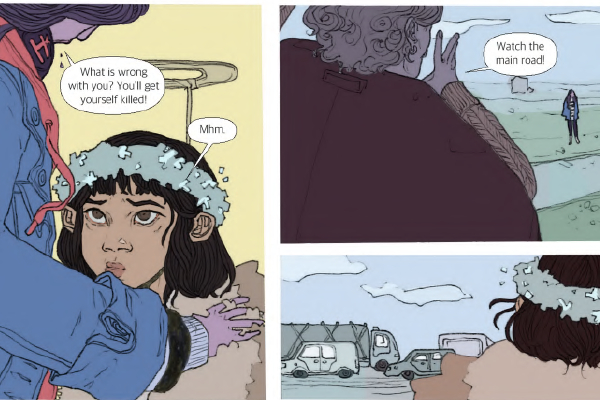 The comic’s final page is illuminated by white, as we shift forward in Zoe’s timeline to the present day. The dominating use of this single colour suggests a blank slate for Zoe, a chance to move on to a better future. All of this is galvanised further by Zoe’s ravishing sense of detail. Her characters are sprawling in their depictions, whilst landscapes and vehicles appear purposefully unrefined. There’s a lot of visual personality leaping from these pages. Her command of lettering doesn’t feel as adventuresome, however. It reads in a formal manner that doesn’t compliment the art and the colours.

Angel achieves a tender clarity via its message being radiated thanks to its earnest transparency. Zoe has an abundance of stories to tell in the near future, including The Crossroads, Toast and The Impending Blindness of Billie Scott. Her work as an illustrator is guaranteed to brighten up anyone’s Twitter timeline, evident in her dexterous skills being picked up by Image for use as a variant cover for #11 of Crowded. Angel is a modest yet powerful beginning for her as a storyteller, and hopefully a prelude of grander things to come.

You can download Angel from Gumroad, and discover more about Zoe’s work from ArtSation. Have you already read the comic? Let us know in the comments section below or send us a Tweet!