Home » 6 Sweet Treats For Your Halloween 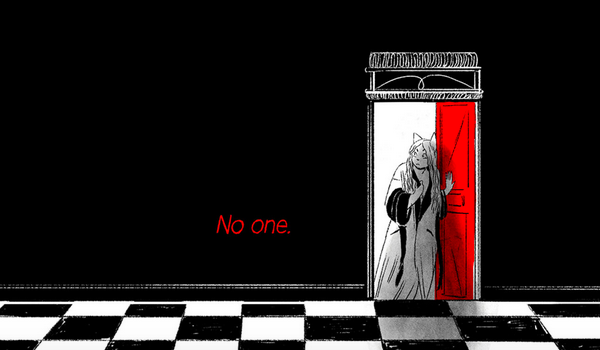 Hey there capers, it’s that time of year again. The season of mists and mellow fruitfulness. The season of the witch. The season when I bring you a selection of creepy, cool, and cute Halloween comics. Because not every treat needs to be edible. So tuck in as today we have six sweet selections for your Halloween. 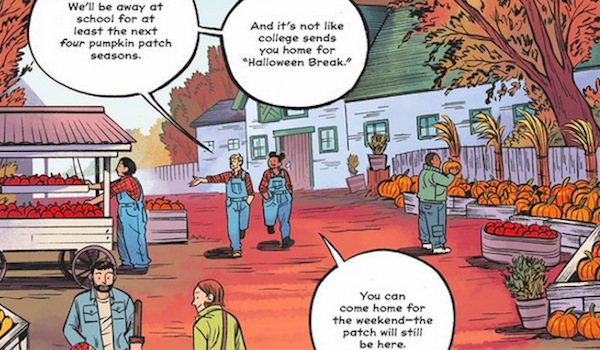 Halloween is many things to many people. A night of spirits. An exploration of fear. An excuse to dress in a flamboyantly ridiculous costume and consume both sweets and alcohol in truly ill-advised amounts. But for so many of us it is also about youth. Rainbow Rowell and Faith Erin Hicks bring us a sweet story at the edge of adulthood in their all-ages offering, Pumpkinheads.

Here we have two old friends, Josie and Deja as they work their last autumn before college at the local pumpkin patch. Josie, a nervous and dedicated young man, has been pining after one of his co-workers for years. And now it is the last night he’ll get a chance to see her. So his extroverted friend Deja convinces him to ditch work and cross the fairgrounds to confess his affections. Of course it being the busiest night of the season they have some difficulty reaching her. And as they travel they (and we) learn a little more about these youths, their various relationships, and their anxieties. Rowell captures the recklessness, energy, and creeping sense of premature nostalgia that comes at the end of one’s childhood. It feels familiar and wistful as the fading year.

Now long-time readers may remember Hicks from a previous Halloween list where I talked about her book Friends With Boys. Here she brings back her soft, youthful style. There’s a real sense of liveliness and excitement in her characters. And then there’s the festival. The end of the book contains a charming interview between Rowell and Hicks. Apparently Rowell had Hicks visit an authentic Nebraska pumpkin patch for the story. The visit must have been impressive as Hicks brings us the energy and charm of a pumpkin patch perfectly. You can practically feel the crisp autumn air and smell the faint wood smoke. It’s pretty much the platonic ideal of autumn. Hicks has captured something beautiful and nostalgic. An idealized version of fall in which all of us are lucky to wander. 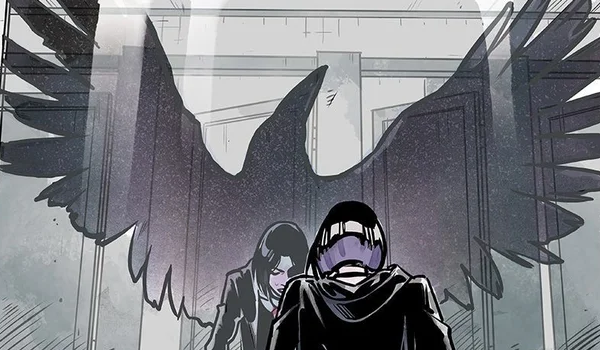 While we here at A Place To Hang Your Cape specialize in superhero comics, I haven’t actually included any in past Halloween lists. Oh sure there’s your Hellblazer, your Hellboy, but we have yet to have a classic capes and tights superheroes. Well, this year Kami Garcia and Gabriel Picolo bring us an all-ages revamp of Teen Titan Rachel Roth/Raven. Given that she’s a half-demon sorceress and, in this comic, buddies with a medium, I think her inclusion in this list is more than appropriate. In order to give Raven a chance to have a classic origin story, Garcia has elected to use that classic standby of amnesia.

In truth I was a little worried going in. We’ve all seen so many origin stories and I was afraid we’d just get more of the same. But I’m happy to say my concerns were misplaced. Garcia has brought Raven to life as her mystical demon-child self and as a girl mourning the loss of her mother. Making for a somewhat more complicated dynamic her aunt and cousin are both very much aware of her origins while she’s just figuring things out. Teen Titans: Raven also has one of the most positive (if somewhat simplistic) depictions of African Diasporic Religions I have yet to see in popular fiction. An admittedly low bar, but still.

Picolo is an old-hand when it comes to rendering the Titans. His Instagram is full of wonderful art showcasing our heroes in a contemporary, casual setting. Here Picolo brings his skills to give Raven and her world an expressive, lively style. Each youth has a distinct sartorial sensibility and aesthetic. These feel like actual children you might have known growing up (or perhaps for our younger readers do know). Given that Garcia has given Raven a whole school of fellow youths, this is no small feat. Picolo’s realism further extends to the city of New Orleans, drawn here in all its graceful splendor but with a fundamentally playful aesthetic. One we’ll see in the next book, where we’ll get to know Beast Boy. 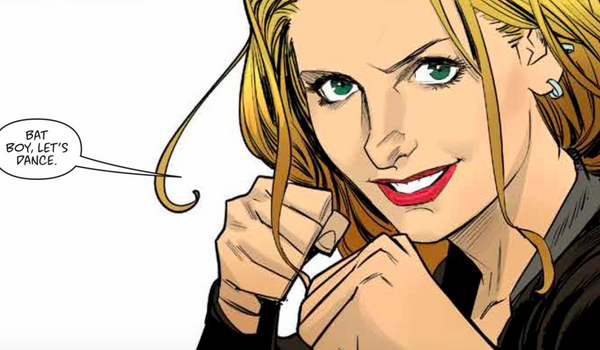 If you were a geek in the late ’90s-early ’00s there’s a very good chance you were into Buffy The Vampire Slayer. Buffy was one of the most iconic fantasy/horror shows of the time and while not everything has aged perfectly (Sunnydale might be the whitest part of California) it still means a great deal to so many of us. While the series has continued in comic form, now we have a completely new reboot.

Jordie Bellaire and Dan Mora bring us a contemporary Sunnydale in their new Buffy The Vampire Slayer series. Generally speaking, I like Bellaire’s alternations. Xander is a mopey blogger. Willow is already out and vaguely goth. Cordelia isn’t nearly as catty. Robin is a student. And Drusilla comes back as a ferociously competent monster in a well-tailored suit. It’s really interesting to see these familiar faces (all modeled on the original actors) re-imagined for today. We’ve already seen the lovelorn nerd, the mean girl, and just about every iteration of a coming out story. So it’s nice to get something new. At the same time Bellaire honors the show in tone, dialogue, playfulness, and, above all, in the ways in which the Scoobies interact with one another. Personally I can’t wait to see how things turn out.

Mora’s art is dynamic, with a wonderful sense of flow and action (very important what with all the slaying). But above all it’s deeply versatile. Buffy has always walked the lines between comedy, horror, and drama with a fair degree of finesse. I am pleased to say that Mora’s art does the same. Sunnydale is a study in contrasts, the brilliant California sunshine against the pitch shadows. He further gives each character unique style, expressions, and attitude. He’s truly done an excellent job capturing the actors while still updating them for a modern audience. It’s this attention to detail that really brings the comic to life. 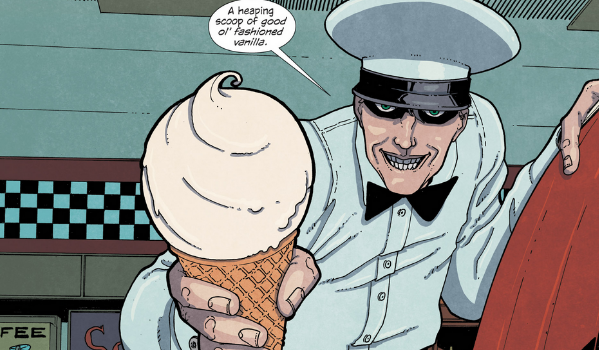 Here we come to one of the more disturbing comics I have ever had the pleasure to read. With a new episodic story each issue, W. Maxwell Price and Martin Morazzo‘s Ice Cream Man reminds me distinctly of The Twilight Zone (Price has said that he was a fan of the show in his youth). Each issue brings a new bizarre horror; the only constant is the titular ice cream man who appears with a frozen snack and a bright smile. He’s sort of Rod Sterling by way of Lovecraftian horror with a pinch of Normal Rockwell. Each issue is a new disaster, some relatively mundane. A venomous spider, drug addiction, nostalgia. While others are rather more exotic. And as for the ice cream man himself? Well all we can really say is that he is much more than he seems. It’s an intriguing premise executed with skill, style, and a great deal of humor.

Morazzo’s art is a charming combination of bright and cheery, with deeply unsettling monsters. Ice Cream Man has an appropriately candy-colored aesthetic (courtesy of colorist Chris O’Halloran). Here, smiles are just a little too wide, clothing just a touch smooth, people just a bit too kind. And while Morazzo is skilled at infusing these scenes with a subtle sense of wrongness, he is equally comfortable steering right into dramatic body-horror and eldritch nightmare territory. Truly Ice Cream Man is a sweet treat sure to get under the skin. 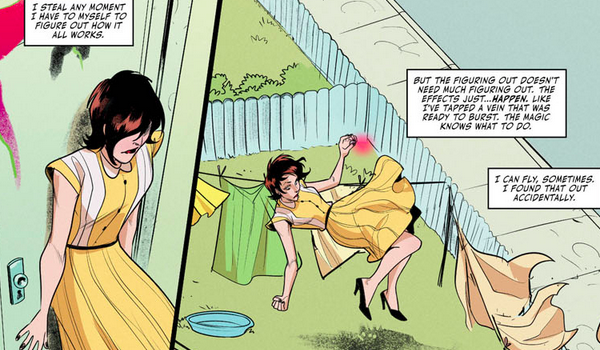 Witches have often been used as an embodiment of social fears, often directed towards women. Ben Blacker and Mirka Andolfo bring these fears to literal and striking life in Hex Wives. Now if the name Blacker sounds familiar it’s because he was featured in last year’s Halloween selection where he created The Thrilling Adventure Hour: A Spirited Romance. Here, he brings us a coven of effectively immortal witches (every time they die they’re brought back reincarnated) and a mysterious society of powerful misogynists known as a the Architects.

They have been fighting for centuries. The Architects kill the witches over and over and over again only for them to continually come back. It’s an endless cycle. But then the Architects find something. They find a way to tame the witches. And thus we find the coven living in an isolated suburb as a group of contented housewives with absolutely no memory of their past lives or their powers. But they can only be kept down for so long. The witches’ powers are all activated by blood. And it is through a series of happy accidents that they regain their rightful magic. While Blacker writes with his characteristic humor and droll wit, he’s rather more political, and more violent, in Hex Wives than he has been in previous work. It’s a refreshing change.

Andolfo’s art is clear, crisp, and clean. The suburban hellscape that is Desert Canyon is done up in the smooth, sterile stylishness of a home decorating magazine. There’s also a strange timelessness here. Technologically everything is up to date (at least for the Architects) but the prison they’ve crated is a version of 1950s Americana that never really existed. It makes for a claustrophobic, unsettling reading experience. But where the suburban fantasy is characterized by restrained domesticity, Andolfo proves herself skilled at chaos as well. When the witches awaken they do so dramatically. Hex Wives turns comfortably from placid gardens and cozy kitchens to a landscape of fire. Colorist Marissa Louise has done wonderful work contrasting the pastel prison with the (sometimes quite literal) darkness beneath.  A wonderful transformation that makes Hex Wives something a liberating experience.

1. When I Arrived At The Castle 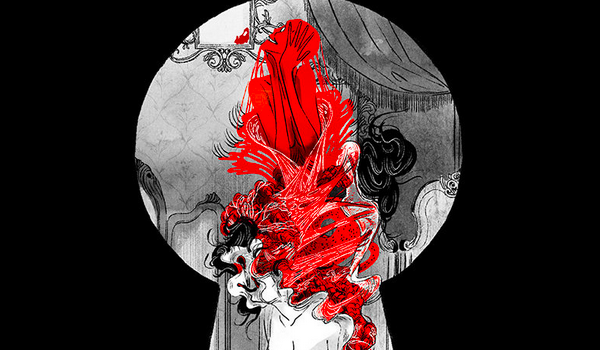 Emily Carroll is fluent in the language of dreams and fairy tales. I’ve written of her work in the past, when I reviewed one of my favorite books, Through The Woods. Now she brings us yet another treasure, this one of an altogether stranger nature. Where Through The Woods brought us five unique stories of relatively straightforward narrative When I Arrived At The Castle is a single story that twists about itself hypnotically.

Carroll’s art is deeply expressive, fluid, and occasionally downright grotesque. Her stylized world is baroque and rich with detail and depth. Here we have a florid castle, filled with ornate furnishings and languid forms. Carroll keeps her colors to a simple black and gray with splashes of brilliant red. Such a striking palette gives everything a sense of violence and warmth. So much of her art walks between elegance and ferocity, between beauty and revulsion. With such richness, detail, and contrast it’s all too easy to get lost within these pages, in Carroll’s visual language. But to get lost is a true pleasure.

So capers, whether you’re looking for a cute autumn story, a revamp of an old classic, or something right out of a nightmare, we’ve got you covered. But we’re always on the prowl for more delightful horrors. Let us know in the comments or on Twitter what it is that has you captivated this October.