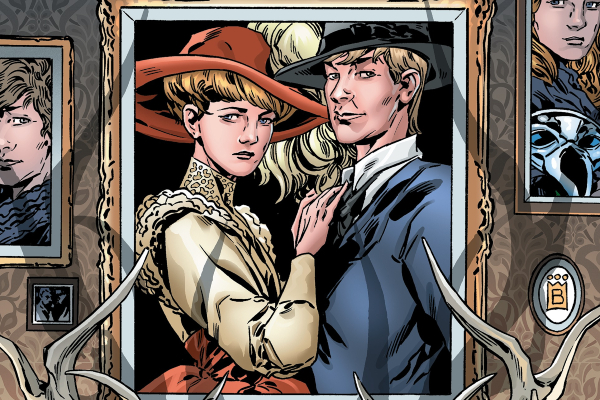 We last left Comichaus on a slightly less-than-satisfactory note. #7 of the ongoing anthology had an unbalanced split between strips of a high standard and strips that felt lacking in their quality control. Fortunately, #8 swings back into action with a barrage of routinely well-executed content, many of which end their respective instalments on perfectly timed cliffhangers that leave the reader desperate for more.

Chalk provides the reader with a riotous conclusion to its first arc. Visual splendour and narrative heft collide in awesome style. Jackie’s furious bludgeoning with the skeletal creature responsible for turning her life upside down via synchronised suicides eventually sends her plummeting into the arms of the Devil himself. Bursting with wild action and eye-catching suspense as to how the story will develop, Chalk has proved itself as one of the most imaginative, beautifully-drawn and well-told stories of Comichaus. The strip will return in a collected volume in the near future; that’s one comic we can’t wait to tuck into.

Mandy the Monster Hunter: Battle of Monster Rock treats the reader to its best and most nuanced instalment yet. In this fifth chapter, we discover just how a group of monsters have rampaged a remote island, taking its young inhabitants and their families hostage. It’s an unexpectedly cerebral explanation, one that taps into how a child’s imagination causes unforeseen mutations in the monsters, that adds a dollop of mysticism to the more tangible monster horror vibes of the strip. Hooking the reader in with the promise of a final showdown, Battle of Monster Rock is gearing up to become an underrated component of Comichaus, and a thrilling adventure for Hellbound Media’s star character. 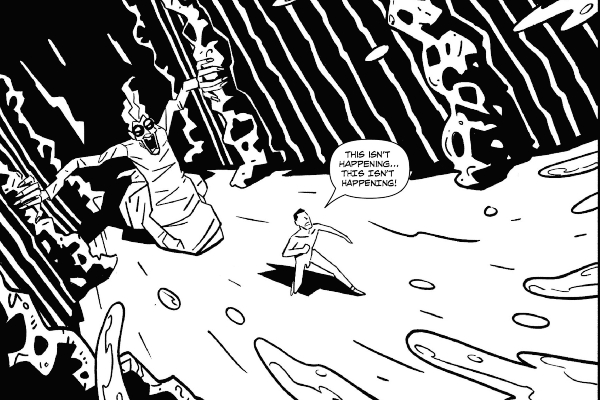 Mia flexes its action-driven muscles more than it had done in the last issue, with our runaway vigilantes Nadiya and Mia setting a trap to expose the corrupt government and police forces they had previously found themselves encircled by. Richard Macrae‘s art is at its best when given these action-orientated scripts, but Chris Robertson‘s script itself ultimately fails to drag Mia out of the uninspired tropes of political espionage it’s bogged down in. All the well-worn aspects are there, but there’s nothing new being brought to the table.

Homeopathos revels in its subversive qualities. We saw glimpses of the nightmare-induced story develop in the last issue, and now we see it in full, freakish flow. The visual enthusiasm this strip has makes it a thoroughly exciting read. Gavin Fullerton‘s jagged, sprawling art clings to Rob Jones and Michael Sambrook‘s script with great aplomb. Cold injects a fresh layers of intrigue into its narrative, as Carly discovers the cause that she’s fighting for may be as destructive as the mutated humans they continually ward off. It continues to be an enjoyably retrained story within Comichaus, but it’s sprinkled with tension, making Cold a more complex and cryptic comic than its earlier instalments would have you believe. 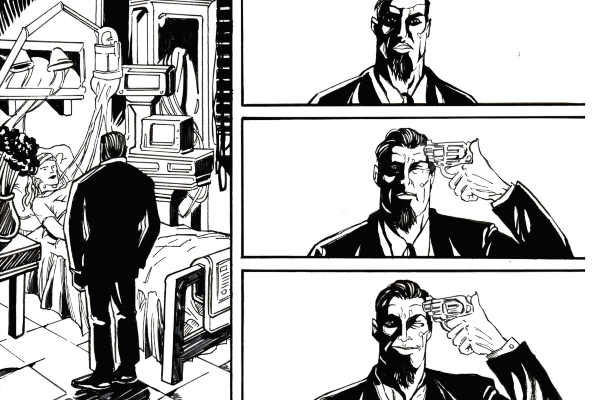 Closing this issue is another inimitably Comichaus-styled one-shot. Written by Marcello Bondi, Click is one of the best one-shots the anthology has produced. A wordless snapshot of the lengths we may go to in order to be reunited with a loved one, it’s a sharp, stirring title. It’s rough, world-weary emotions galvanised by Danielle Folegatti‘s intense, thick, sketchy artwork.

#8 of Comichaus is a continually seductive affair, and makes all the right moves in drawing the reader into these strange, surreal worlds. I’ve found in the past that the best issues of Comichaus are the ones that deliver the full-throttle action, with danger and adventure spilling through every turn of the page, but maintain a narrative thrust. The spectacle shouldn’t drown the story, and #8 of Comichaus manages to, mostly, pull that off.

Have you been subjected to the barrage of awesome sequential action that is Comichaus lately? You can do so by discovering more about the anthology, the app, and more. Do any strips stand out for you as a firm favourite? Let us know in the comments section below or send us a Tweet!