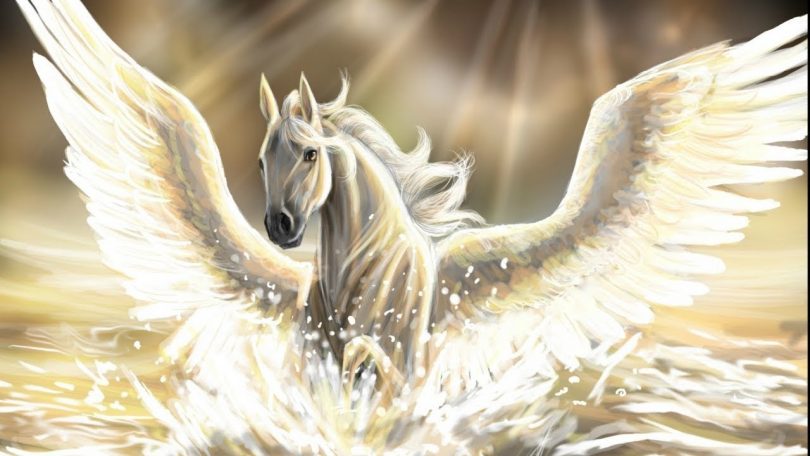 In our modern world, superheroes are considered the great legends of today, dominating comic books, television, and the movie box office. There’s a reason why we go to watch the Avengers and the Justice League over and over again. Not only do they save the day and fight evil, but they are as human as we are, superpowers or not. A millennia or two ago, Greek god and heroes were the champions of old. The Greek myths are my personal favourite tales, with many gods, heroes, monsters, tragedies, and stories which deserve their own cinematic epics. Some have been done, such as the iconic Jason and the Argonauts and Clash of the Titans. Here are ten other Greek myths that would make excellent movies.

In the beginning, there were the Titans, the first rulers of the world. The Titanomachy is the untold war between the Titans, and their children, the Olympians. It makes sense to tackle such a major game changer in Greek mythology, introducing the young gods who would rule from Mount Olympus, and be recurring figures in these hypothetical movies. After castrating his father, the Titan Kronos feared an uprising by his own children, and ate them after his sister-wife Rhea gave birth. But, his youngest, Zeus, avoided being eaten, raised in secret to avenge his siblings and to set them free from his father’s gut. These events and the mutilation of Kronos by Zeus would lead to the Titanomachy; the ultimate if unseen clash of the titans. The victory of the Olympians would pave the way for their rule over mankind.

I decided not to include Jason and the Argonauts, as that is already a fantasy classic, though a remake or update could be considered – perhaps told from the point of view of Princess Medea, scorned wife of Jason. A princess of Colchis and granddaughter of Helios, Medea was a witch who aided Jason in his search for the Golden Fleece. Though hexed into falling in love with Jason, she came to be devoted to him, using magic and murder to further his agenda. The ungrateful Jason would abandon Medea for Princess Grauce. In grief and revenge, Medea assassinated Grauce and her father, poisoned her own children, and flew off on a dragon-pulled chariot. Meanwhile, Jason met a rather crumby death, crushed by the rotten mast of the Argo. Hell hath no fury like a woman scorned.

While Disney made Hercules an adorkable, gushing musclehead, his classic self, Heracles, was a bit more violent and crazy. As you know, Heracles is the demigod son of Zeus, possessing godlike strength. Zeus’ wife Hera hated Heracles and drove him into madness, murdering his wife Megara and their kids. To make up for his actions, Heracles had to complete twelve labours to earn redemption. Amongst these tasks included slaying the Nemean Lion, fighting the multi-headed Hydra, cleaning out some very disgusting stables, borrowing a girdle from the Amazons, and taming Cerberus. This would be a great action movie, with plenty of set pieces, and above all, a somewhat extreme redemption story for a troubled man. 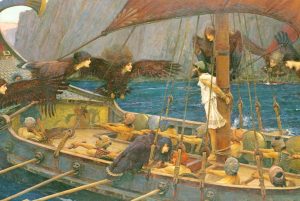 Considered one of the greatest tales of all-time, the Odyssey deserves a faithful transition to film. It focuses on Odysseus, veteran of the Trojan War, doomed to take a decade to get home after murdering a baby. Like Heracles, Odysseus must go on a long journey, face hazards, overcome his own internal conflicts to earn redemption, and get home. The Odyssey is an epic, so either a lot would be cut out, or it could even work as a multi-part journey. In the meantime, Odysseus’ wife Penelope has to defend her home and honour from many suitors, since everyone believes her husband to be dead. 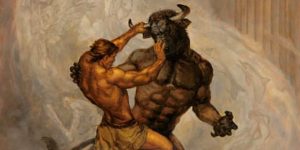 Theseus is the founding king of Athens, best known for his encounter with the Minotaur of Thebes. With an Arthurian birth and touch of destiny, Theseus goes on a quest to claim his right to become a king, undergoing labours and challenges. Theseus’ adventures would lead him to Thebes, where he is willingly placed in an inescapable labyrinth with Asterios the Minotaur. I feel that Minotaur should not just be a monster to beat, but to explore his warped humanity. There is good duality between Theseus and Asterios, both sons of royalty, but have very different destinies and parental relationships. Heracles is Theseus’ cousin, whilst Medea is his stepmother, so the prospect of crossovers would be possible. 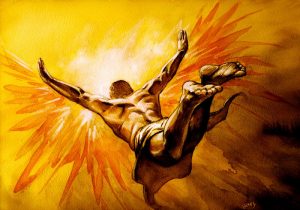 The aforementioned labyrinth in Theseus’ story was built by Daedalus and his son Icarus. You probably know Icarus’ story very well – a young man flies using wax wings, gets a bit too close to the sun, his wings melt, and he falls to his death. This story is relatively short and wouldn’t work for a whole movie – unless it occurs relatively early on. This could be Daedalus’ story, building the labyrinth for King Minos, is imprisoned in it after Theseus kills the Minotaur, he and his son fly off, but Icarus dies per mythology. Daedalus survives, but is unable to cope with his grief, blames Minos, and goes on a mechanical-fuelled revenge path to kill the king. This does stray a little from the myths, but they can always be interpreted differently. 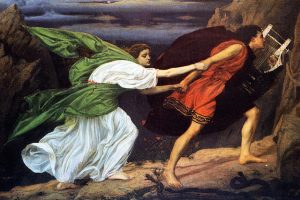 We all love a good Greek tragedy, and the legendary poet and musician Orpheus is blessed with a terrible one. Orpheus was such a phenomenal musician that he moved the gods to tears. He served as an Argonaut, helping his shipmates from being lured to their doom by the sirens. But, his most known story revolves around the death of his wife Eurydice. So desperate to reunite with her, Orpheus travels to the Underworld, convincing Hades and Persephone to let Eurydice leave with him. Hades agrees, but on the condition that Orpheus doesn’t look back at his wife til they get back to the mortal world. As you might guess, this doesn’t go well. Admittedly, I’m not sure how a full-length movie could be told. Perhaps make it a subplot of an Argonauts retelling? 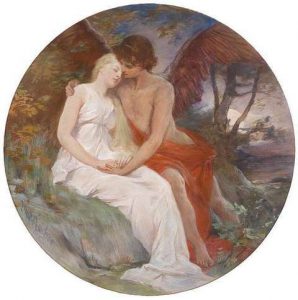 Love is a rather shaky and often violent source of drama in Greek myths. It’s anarchy essentially, but the ballad of Eros and Psyche is considered one of the greatest love stories of all-time. Psyche was so beautiful that people claimed she was better-looking that Aphrodite. Aphrodite sent her son Eros to make Psyche fall in love with a pig, but Eros instead fell in love with her. Eros draws her into a fairy tale like lifestyle where they fall in love and marry, but Psyche is forbidden from ever looking at her husband. Kinda unfair. When Psyche breaks her promise, Eros abandons her. She then goes on a dangerous quest orchestrated by her spiteful mother-in-law to earn back her husband’s trust. Some tweaking might have to be changed to not make this romance seem so one-sided, but it could make for a dramatic romantic epic. 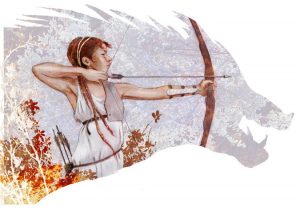 There are many famous heroines in Greek myths, like Andromeda, Electra, and Atalanta. Atalanta was abandoned by her father for merely being a girl, but was adopted by Artemis. Growing up in a man’s world, Atalanta seeks to prove her worth amongst other heroes. Though appearing as a member of the Argonauts and earning their respect, Atalanta still faces opposition from pig-headed idiots. Speaking of pigs, Atalanta and a star-studded line-up of heroes join a hunt to take out the rampaging Calydonian Boar, with Atalanta delivering the killing blow. Though Atalanta’s entire story is mostly about men lusting over her virginity, this could reworked into a movie about identity. Atalanta faces conflict from both her worlds, drawn into a battle of wits and genders, and facing the possibility of choosing love over her goddess Artemis. 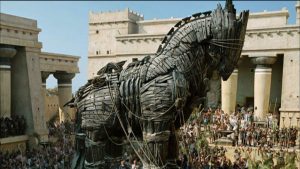 And finally we have the Trojan War, perhaps the biggest brouhaha in all of Greek mythology. The epic was recently adapted into a semi-crumby BBC miniseries, that suffered from poor acting by the two leads. The story begins with Paris, a prince of Troy, being asked by three goddesses which is the most beautiful. He picks Aphrodite, who rewards him with the world’s most beautiful woman, Helen of Troy. Too bad she was already married to the Spartan king Menelaus. Helen elopes with Paris, everyone ignores his sister Cassandra’s warning that Troy is now officially doomed because of their union.

Cue the Trojan war, with the Greeks led by Menelaus, his brother Agamemnon, Odysseus, and the near-unstoppable Achilles. Most folks probably know how this war turns out – Achilles was telling Skyrim jokes 4000 years before they were trendy, the Trojan get outwitted by a wooden horse, and the treacherous lovers get their just desserts. Always listen to the girl who can see the future. If this were part of a Greek mythological cinematic universe, the Trojan War would be the grand finale – with the Odyssey being the literal final voyage. Well, that’s how I would write it anyway.