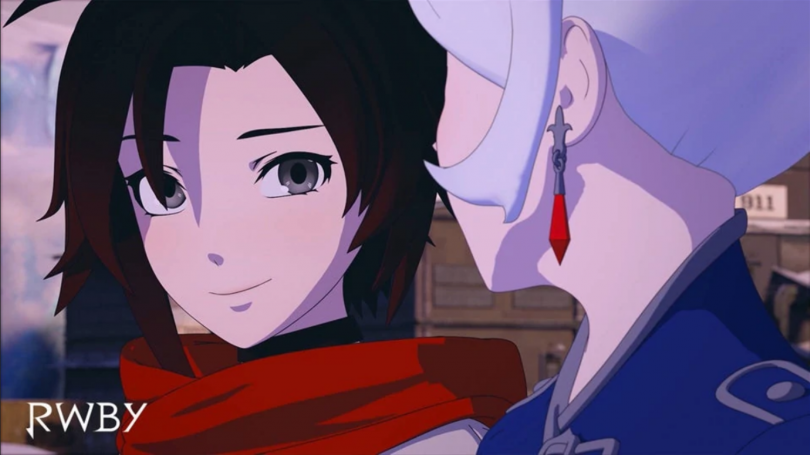 Following the success of their first Atlesian mission, Team RWBY and Team JNPR are feeling pretty high, and enamoured with the Ace Ops. “Pomp and Circumstance” serves as the closure for the volume’s first act. Despite the thrill of the previous episode, this feels quite melancholic and gloomy, even though certain parts of it should be a time of celebration.

Both Beacon teams are completely in awe of the Ace Ops, but learn rather harshly that being a professional Huntsmen team doesn’t always been they are united by friendship. As Elm points out, Ruby still thinks like she is on school campus; the Ace Ops all get on well enough and watch each other’s backs, but that is part of the job, and they don’t confuse their duty with chummy friendships. A bit of a sour note. Ruby suggests that her team should go sightseeing in Atlas, but Weiss, Blake, and Yang are too exhausted to do so.

General Ironwood arrives with Amity Colosseum in tow. He sends Clover off to Mantle to investigate the murder pattern of political figures speaking out against Atlas. This includes poor Forrest, who was killed by Tyrian last episode. Ironwood admits he cares not for his public image, but he does not tolerate someone framing him for political assassinations. Ironwood expresses he is well aware of the problems in Mantle, wishing for Team RWBY and Team JNPR’s help in dealing with them.

Unfortunately, an ever bigger, annoying, irritating issue flies in to bug everyone. We are in Atlas after all, so Jacque Schnee has to make an appearance sooner of later. He comes in ranting and raving about Ironwood crippling his business, and invading the mine, which is private property. When he threatens to take matters to the kingdom’s council, Ironwood shuts down Jacque with an amazing retort. He explains the mine facility is now under his jurisdiction, and since it is the location of a private military operation, he didn’t require a vote. Ironwood then subtly mocks Jacque’s election for a seat on the Atlesian council, and threatens to boot him off the facility if he comes to stir up trouble.

Jacque goes to scream at Ironwood some more, then spots Weiss nearby. He is temporarily stunned, accusing Ironwood of dragging Weiss into his schemes. Of course, it is not out of fatherly care, but mere worry of what her affiliation with Ironwood will do to his precious reputation. Weiss speaks up, reminding her father that she made her own decisions. They have a brief spat, but Ironwood steps in when Jacque threatens Weiss. Of course, Jacque being the biggest jackass in the show, decides to go for the throat and tries to guilt trip Weiss by mentioning her mother’s apparent devastation when Weiss ran away.

Jacque then turns to mock Ironwood, claiming he has been given the political noose to hang him. Behind him, Weiss is joined by her teammates, hand-in-hand. When Jacque insults them, Weiss disregards her teammates as friends, but instead views them as family, deliberately holding Blake’s hand, and specifically telling her father where she stands. At out of all of the characters in RWBY, Weiss has definitely gone through the best personal transition. Jacque flies off, just as Winter drives up seconds later, obviously avoiding him. Penny suddenly leaps in with a huge cheer of surprise, though Winter points out they haven’t got to said surprise yet.

Cut to the familiar yet somewhat haunting sight of Amity Colosseum. Ironwood addresses the students, praising them for their courage and adversary against threats. As a reward, Team RWBY and Team JNPR are rewarded their official Huntsmen licenses. Although this moment should feel glorious, it goes down about as well as a lead balloon, especially when Ironwood mentions the newfound trust between the group. Oh, the looks on Team RWBY’s faces says it all. No doubt their lie will blow up in their faces sooner or later.

After Ironwood and Winter leave, the new Huntsmen celebrate, take selfies, and have cake provided by Penny. Ruby sits alone in the spectator seats overlooking the arena, and is joined by Qrow. Their conversation is quite sweet, briefly touching on Ruby finally becoming a Huntress. She wonders if she did the right thing about lying, but Qrow reassures her that she had good intentions, unlike Ozpin. Their chat turns to Summer Rose. Ruby’s mother finally made an appearance in the last volume, hopefully having a larger role in this one. Ruby asks Qrow if Summer’s last mission was on Ozpin’s orders, but Qrow instead reveals the mission’s purpose was her own secret. Even Ozpin was in the dark about what her mission was. This feels like a set up for a twist later in the volume.

There has been many ideas and theories about Summer Rose’s fate. Is she alive, dead, or something else? Why did she not come back from her mission? Did she go after Salem using her Silver Eyes? Salem and Hazel have both made separate hints that they have killed other Silver-Eyed Warriors before. It is indeed possible that Ozpin was unaware of the mission’s intent, or this was another lie. Perhaps, he did know the truth and kept it a secret to not bring sorrow to Summer’s family, or remained quiet on her own request. The possibilities are endless, but there is hope we shall learn the truth now. On a more confirmed note, we learn Summer was apparently a brat according to Qrow, though he means that in an affectionate way.

Marrow, Vine, and Elm show up to recruit the teams for their first official missions. Using a digital, holographic assignment board, Jaune unintentionally volunteers to escort Mantle school kids to class, whilst everyone else wants to hunt a rogue Grimm in the Mantle sewers. Next episode will probably follow each group on their first missions. Exciting times ahead!

In a final scene, Jacque is at home in his presumed method of brooding. His son, Whitley, pokes his head into the study, announcing his dad has a guest. Jacque has no such memory of arranging a meeting, but Whitley reveals the visitor let himself in. Cue Dr. Arthur Watts striding in, scaring the bejeezus out of Jacque. This is the first time the jackass has looked legitimately surprised. After kicking Whitley out, Jacque is surprised to see Watts, since he was believed dead. Watts plotted this intentionally. He asks Jacque about his Ironwood problem, and makes a rather devious offer to let Jacque “have [his] cake…and eat it too.”

Placing the two moustached villains together is a delightfully sinister move, and now the board is set for one heck of a chess match. Watts is likely aiming to stir up as much anger and fear as possible to increase Grimm attacks. And who better than to be the scapegoat for such a move than the most hated character in RWBY.

What are you thoughts on this episode of RWBY? How long will it be before Ruby’s lies unravel? Just what is Arthur Watts up to? Leave a comment below or on our Twitter and/or Facebook feeds.