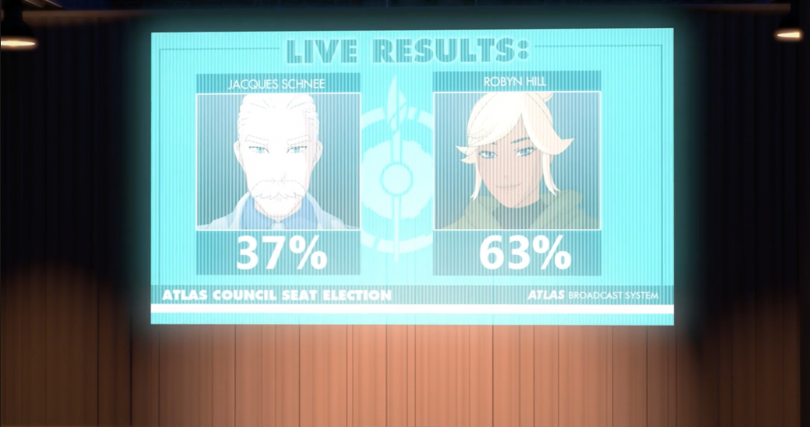 It is a tense time in Atlas following the rioting in Mantle last episode. Jacque Schnee closed all SDC operations in Mantle in a political move, causing expected rage in the streets. Now the council election is on the horizon between Robin Hill and Jacque. A political election? How topical. But, while things look ready to heat up, Team RWBY are given some time off beforehand. Of course, as expected, things are about to go to hell in Atlas, in the best episode of the volume yet. Penny joyfully declared that her friends’ time in Atlas would be “just like Beacon again.” Oh, Penny, you could not have been closer to the truth!

The rioting in Mantle has been quelled offscreen, so polling day is naturally a tense time. However, instead of rallying all Huntsmen to quell the likely chaos that will follow, General Ironwood takes a more laidback approach. Team RWBY and Team JNPR continue their training, during which Jaune learns to expand his aura to great effect, Ruby tries new ways to use her Semblance, and Weiss finally beats Winter in a David vs. Goliath match.

Ren, meanwhile, is meditating to block out any distractions or stress. Ironwood and Clover step in to discuss the election. The gang are particularly pushy about trusting Robin, and even bringing her into the fold. Ren, on the other hand, is eager for new mission assignments. Instead, Ironwood orders the group to take the night off, in preparation for whatever tomorrow will bring. Security is surprisingly lax during this crucial election, as we shall see later on in the episode.

In the dorms, Weiss watches a news report, predicted that Robin will be the winner. She questions her father’s motives for shutting out Mantle services the night before the election. In the real world, this would be considered political suicide. Yang and Blake are planning to go nightclubbing with Team FNKI. The duo have been playing background roles since the volume began, regardless of them making adorable goo-goo eyes at each other. Nora and Ren show up, planning to go to Robin’s intended victory rally with Ruby, where Penny is running security. Weiss opts to go with Jaune and Oscar to the movies, rather than watch Blake attempt to dance, or attend the victory party.

The journey to the party grows very tense. Ruby, Ren, and Nora worry, well, everything. Their biggest concern is what will happen if Ironwood’s plan is a success. How will people react to the truth about Salem? How can Salem be beaten if she can’t be destroyed? Nora does make a suggestion that fans have been asking – perhaps someone else can kill her, while Ozpin cannot. Nora looks to Ruby as a candidate, but she is unsure. Ren moans that they should be training, kicking off a rather uncomfortable and ugly tension with Nora.

Penny greets the trio as they arrive, explaining only she and Marrow are on security detail. Kinda of a weird decision. Someone is going around murdering Mantle citizens, and it was decided only two guards were needed for a political rally? That’s like going to an assassin’s convention without any bulletproof armour. Nora brings up Blake and Yang’s night out, Ren commenting they are back to being friends. Nora then pretty much confirms that Bumblebee is a thing, using it as a reference to just whatever the hell is going on between her and Ren. The two start bickering about their relationship, Ruby seeing it as an excuse to escape with Penny.

Things aren’t better backstage as Marrow squares off with the Happy Huntresses. Robin tries to keep the peace in her own way, wishing that all citizens are treated equally. Marrow is sceptical of accomplishing this legally, implying Robin has broken the law a few times to get stuff done. Robin’s teammate, Fiona Thyme, passionately addresses the supporters before asking Robin to come up onstage to say a few words. Bless the adorable lamb. Hopefully nothing bad happens to her…

Ruby goes to check on Nora and Ren, finding they are still arguing, and leaves them to it. Robin expresses her pride for her people, and how while individually they are strong, together they are unbeatable. This stirs something in Nora and Ren. Nora asks Ren why he is pushing her away, to which Ren claims he has never been good at talking. Nora then throws caution to the wind, not needing words to express herself, and grants everyone’s wishes by finally planting one on Ren! It’s about damn time! Boop-di-boop all the way! Our favourite couple have finally kissed, and nothing looks like it can ruin Robin’s victory!

Too bad Dr. Watts is watching the events unfold in his lair, watching two video feeds – one is of the victory party, and another is footage of Penny killing Grimm. He has a line of scrolls in front of him, and sports electronic rings on his fingers for some master manipulating. Watts asks Tyrian if he is ready, to which he wickedly cackles to with glee. As the supporters count down to Robin’s victory, Ruby spots Tyrian’s new mechanical stinger emerge from the crowd. The diabolical assassin somehow got in wearing a hooded cloak with attracting attention. That’s what happens when you assign to airheads to watch over a political rally.

Ruby screams to warn Robin, which Ren hears, but it is too late. The lights suddenly go out as Tyrian starts slaughtering people in the dark, causing chaos. Ruby is caught in the panic, slammed against the stage. Penny goes into nightvision mode, spotting Tyrian, but he vanishes before her eyes. Tyrian is either really fast, or Watts has some influence over Penny’s software. At the same time, Watts is doing some melodious editing, and also decides to alter the polls as well.

Fiona guards Robin, only for Tyrian to leap onstage and reveals his Semblance’s ability to bypass a person’s aura and poison them via physical contact. Penny leaps to defend Robin, missing Tyrian, and tackles her to the floor instead. Robin aims her bird-shaped crossbow at Penny, who actually looks a little menacing in the dark. And that turns out to be the idea behind Tyrian’s attack. The lights abruptly come back on, Penny stands onstage with her blades outstretched, people like dead and bloody on the floor, and Jacque Schnee is declared the winner of the election!

It is the Vytal Festival all over again, where Yang was framed for crippling Mercury. Only now, Penny is the pariah, made to look like she attacked the rally to ensure Jacque won. Penny is equally confused and horrified, while Robin is enraged by her apparent betrayal. Ruby races to Fiona, informing Nora and Ren that Tyrian is around. Marrow forces an army of enraged supporters from storming the stage, Ruby forced to drag him away, despite the poor fella’s attempts to protest their innocence. Watts, meanwhile, makes his exit, uploading the footage of Penny’s “attack” online before leaving.

The gang flee into an alley way, where Penny looks on the verge of crying, if that is even possible. Ren is silently riled up too, while Marrow orders Penny to return to Atlas. She does so without a second glance. Why must our favourite robo-girl be forced to suffer in this series? As if death wasn’t bad enough, now we must mentally traumatise her as well. The team get ready to move as sirens flare, and the Grimm descend.

In all seriousness, this is the most exciting and jaw dropping episode of RWBY in years. The build up to the fallout was pure class, tricking us with a joyful moment, than sweeping the rug from under our feet. Watts’ trickery will have a huge impact on the entire cast. Tyrian’s presence, and Jacque’s victory, will push Ironwood to likely do something drastic. Team RWBY may have to give up the ghost and tell the truth to Ironwood. The biggest concern is what impact the assassination will have on both Robin and Penny. Fiona seems to at least be alive, so perhaps Tyrian’s poison is paralyzing rather than life threatening, or it will grow worse.

Ren and Nora’s kiss was glorious, but their relationship will likely hit the rocks next episode. No doubt that Ren will get all angsty, claiming the kiss was a distraction and they could have prevented the attack. There is always going to be quarrels and moments of disagreement in even the best of relationships – yes, even in Renora. Just don’t force them to break up and give each other the cold shoulder for melodrama.

Though next episode will likely deal with the aftermath of Tyrian’s rampage, some time should be shone on Blake, Yang, Weiss, Jaune, and Oscar. However, we are nearly halfway through the volume, so time and pacing are precious. “A Night Off” has proven itself to be the best episode of Volume 7 so far, reminding us of tragic times of the past, and new ones to come.

What did you think of this episode of RWBY? Who do you think should have won Atlas’ election? Leave a comment below, or on our Twitter and/or Facebook feeds.