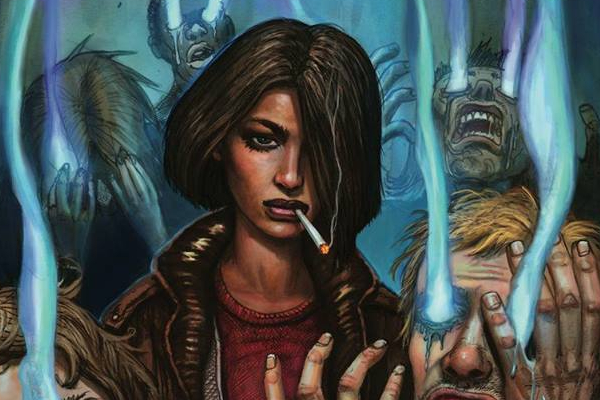 The awkward thing about being so behind on my Comichaus reviews is that I’ve since read #11 in advance (it’s been out a while, after all), and I’ve been given a front row seat to the anthology’s transformation, as declared by the above announcement in #9’s inside cover. The serialised strips that have defined Comichaus up to this point are being retired in favour of the comic now consisting of one-shots. It’s an unexpected creative move, and one that the comic’s editor Pete Genepool explains in detail in my interview with him for Comic Scene, Volume 2 #0.

It’s not a wholly unforeseen move, however. #9 of Comichaus features a greater reliance on one-shots than past issues, and the serialised strips themselves (Cold, Homeopathos, Mandy the Monster Hunter) have a definite feeling of this being the final countdown. Homeopathos pries open the means and motives of its players, as office workers James and Alan hatch a plan to uncover the witch-like goings of their maniacal doctor of insomnia.

The surging, razor-sharp nightmare sequences are almost entirely absent from this chapter, and in its place are rather lengthily and cumbersome batches of dialogue that bog the flow of the story down. Still, a handsome and unexpected emotional arc emerges for James as the precise reasons for his insomnia are revealed, and the strip’s snarky sense of humour remains fully intact. A more modest chapter in this distinctly Madius-flavoured comic. 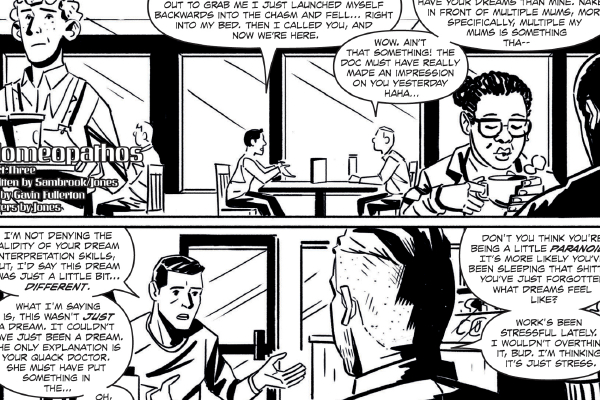 Mandy the Monster Hunter, by comparison, feels like it continues to stretch itself out as much as possible. Much of this penultimate chapter sees Mandy gearing up for the titular battle of Monster Rock. Still, any reasons to see more of artist Vince Hunt and letterer Nikki Foxrobot‘s stocky, animated monster battles is a good reason. Elsewhere, Cold strips back the action as much as it can, delivering its most character-driven installment yet.

Expanding on the events of the last issue, where it’s revealed that the government forces keeping Carly and the rest of the populace safe from the sub-zero zombies aren’t as protective as they should be, Carly finds herself, literally, in deep water. An invasion takes shape, one that’s aimed squarely at Carly. An odd coincidence, given that this shady government is already bearing down on her? The sense of mystery at work here is as mesmerising as Lyndon White‘s art. 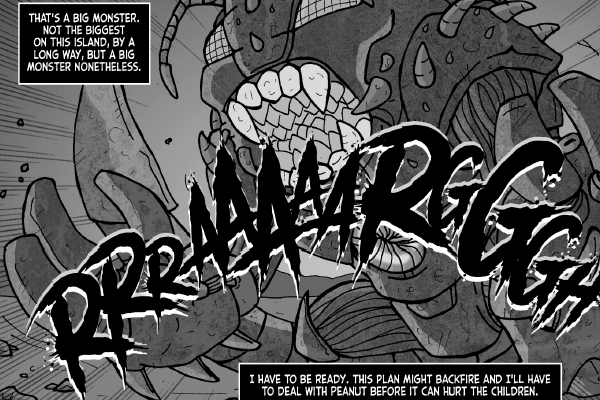 The newer strips that inhabit Comichaus #9 are nothing short of insane. The last ever multi-part strip seeing Comichaus through this transitional period is Splendid Grins. Produced by the Cabal Comics powerhouse duo of Fraser Campbell and Ian Laurie, this subversive secret agent tale is easily reminiscent of Alex Automatic. Laurie’s hypnotically grotesque art, with a sharp sense of shadow, emphasises Campbell’s delirious parody of spy-fi tropes. Monochrome Kid rides a little too close to another indie comic for comfort.

Its tale of a singer-songwriter convinced a rival band is stealing his songs comes off as a close cousin of Avery Hill’s Metroland, but with added dollops of Twilight Zone-esque paranoia and body horror. Rebecca Horner‘s visual style doesn’t feel suited to this tale. Her light, wavy shapes don’t compliment the downbeat nature of David Bowling‘s script. Sandwiches closes out #9 in a fantastically creepy manner. Another story contributed by Campbell, the slow-burning story is superbly agitating and Matthew John Scoffe‘s elegant art catches you off guard when the strip’s horror factors erupt. 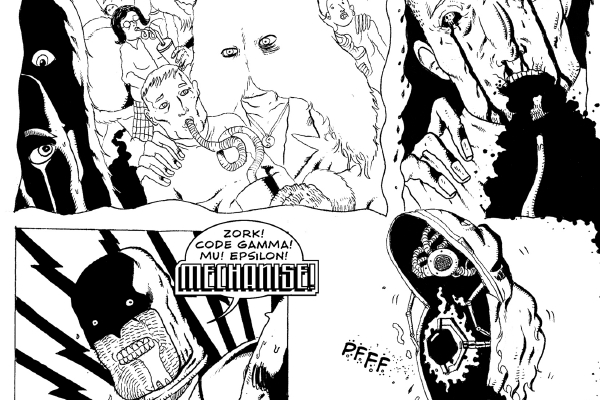 #9 of Comichaus feels as spirited as it has done in the past, but for different reasons. It’s not enough for the serialised strips to be charging towards their respective ends, but the issue’s incorporation of one-shots suggests it’s more than keen to alert the reader to its changing format. Will #10 provide a satisfactory conclusion, not just to the ongoing strips, but for this first era of Comichaus? As mentioned, I have actually witnessed Comichaus‘ transformation, and without spoiling anything, the anthology isn’t going to burn out anytime soon.

Discover more about the anthology, marketplace and app, from Comichaus themselves. Have you got your Comichaus fix yet? Let us know in the comments section below or send us a Tweet!