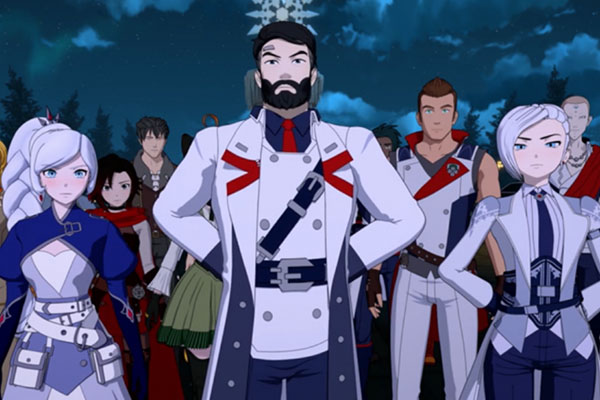 Dinner parties are never a fun occasion, especially in television where a despised character is the host. “Cordially Invited” is the eighth episode of RWBY Volume 7, and last of 2019. It feels like one act of two, with not much happening on a surface level, or so it seems. This is a big episode for the Schnees. Following Jacque Schnee’s election victory, he invited General Ironwood and co. to attend a dinner party at his mansion. Ironwood must defend his seat on the council, Jacque being exceedingly more smug and manipulative in their fateful dinner.

Team RWBY and Oscar discuss the upcoming party, dreading Ironwood being dressed down by Jacque. They wonder if Jacque is actually in league with Salem, Weiss not putting it past her awful father. As we find out this evening, Jacque’s cruelty is all-encompassing.

Ironwood and his huge entourage show up at the Schnee estate, wearing their ordinary clothes. I assume the CRWBY didn’t have the budget to design specific new formal clothes, but perhaps the characters came as they are to spite Jacque. Winter and Weiss are not thrilled to be home, only made worse when Whitley greets them at the front door. To Weiss’ guilt, she learns her faithful butler Klein has been sacked after helping her escape in Volume Four.

Whitley escorts the gang inside, sending Ironwood, Winter, Clover, and Penny off to face the music, while the others are on standby. There is a minor but important moment where Qrow is offered a drink, to which he hastily declines. Also, it may be missed, but all of the waiters are Faunus. Nice enough of Jacque to have his racism on full display. The Ace Ops and Qrow head outside to patrol, while Team RWBY and Team JNPR make plans to cause a distraction so Weiss may snoop about.

It is here that the episode splits into two subplots, so we shall start off with the dinner party first. Ironwood and co. are welcomed by Jacque, who sits with the councilmen besides him, Sleet and Camilla. They don’t have the most detailed designs or personalities, but that might be the point. This is a battle of wits between Ironwood and Jacque after all. Robin was surprisingly invited to, deliberately sitting in the middle of the table, isolated from both sides.

Jacque immediately starts throwing shade and slime, insulting Penny’s own safety. Ironwood retaliates, stating that she is completely under his control. That only seems to visibly upset poor Penny even more. Someone please give her a hug! The conversation turns to Ironwood’s secrets and autonomy, with the council asking him to work with them openly. Robin points out that the people of Atlas are suffering and they have a right to know why.

Jacque adds more fuel to the fire, smugly inquiring about the Amity Colosseum project, but Ironwood does not share its secrets. When Jacque asks if Ironwood does not trust the council, Winter finally snaps. She has been growing increasingly agitated with her father’s words, raging at Jacque that he can’t buy trust. Quietly smug, Jacque flips these words on Winter, listing off each of Ironwood’s recent operations, and asks how they can trust him when he has failed to give them information. Of course, this comes to trust, especially Ironwood not knowing who to turn to and let in for the sake of the greater good.

Winter angrily storms out to compose herself, Penny joining her. Winter criticizes herself for stepping out of line and expressing herself, though Penny takes her comments on being cold and mechanical hard. Penny and Winter’s friendship has been one of reflections so to speak. Penny struggles to be human and identify as one, when labelled as a weapon, machine, and tool. Winter, on the other hand, tries to act cold and robotic, not letting her emotions drive her actions. Winter’s reaction to Jacque hints too, but not uncovering her own specific relationship with her vile father.

The second subplot revolves around Weiss. She hopes to sneak away to snoop around the house, but finds Whitley roadblocking her. Nora and Ren decide to cause a hilarious distraction, pretending to bump into each other, so Nora can chuck a tower of food over Whitley. Whitley yacks on about his new privileges, including his own parking space at the SDC once he can drive. The gag pays off rather well, with Nora dropping the food on a Miss Piggy-lookalike, who then drenches Whitley with red wine. And, as we know, red wine stains on white. Ren is notably happy during this scene, free from all the negative emotions plaguing him recently.

Weiss sneaks through the house, breaking into Jacque’s study. What she didn’t expect to find inside was her own mother! Willow Schnee has finally debuted in RWBY. In the space of three minutes, Willow is presented as a very sympathetic woman, clearly taking the brunt of Jacque’s abuse. She is very beautiful, but tired and, well, on the sauce. Seeing her chug down a bottle in front of Weiss is just heartbreaking. Their relationship is clearly complicated yet still loving in a sad way. Willow proves herself to be a crafty person, secretly setting up cameras in every room in the mansion, just in case she needed proof to throw Jacque under the bus. Do it!

Willow shows Weiss that Arthur Watts has been visiting Jacque, exposing his presence. Willow goes to leave, then delivers the biggest eye opener of the episode: she asks Weiss to not forget Whitley. The little asshole has been nothing but trouble, but Willow puts a firm reasoning behind it. He was left with nothing but his parents for influence, since Weiss and Winter both left. And with his mother hammered most of the time, Whitley only had his father to turn too. This show is making me feel pity for Whitley!

Our final scene in the episode is with Watts, who decides to ramp up his master plan. He turns off the heating grid in Mantle, just as convenient snow fall occurs. Mantle is about to be put on ice. Forget Salem or Cinder, for Jacque has to be the most evil person in RWBY. What he has done to his wife, his daughters, even his son, is unforgivable. The episode shines a new light on Whitley, so there may be hope to get him out of his father’s web. Although the episode feels a little lacking, it actually has a lot going for it.

Did you enjoy this episode of RWBY? What does the rest of Volume Seven have in store? Will the Schnees unite against Jacque? Leave a comment below, or on our Twitter and/or Facebook feeds.