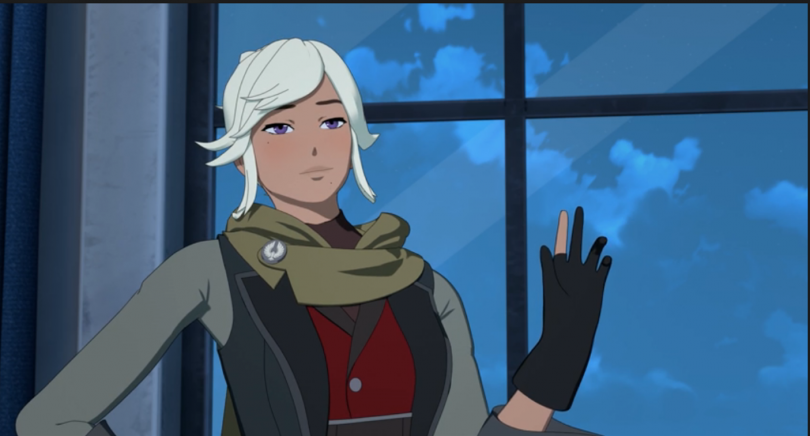 Call it fate, call it destiny, call it karma, or call it justice; when a villain gets their just desserts, it is often glorious. After taking a holiday break, RWBY Volume 7 returned with a real game changer of an episode. Last episode, Watts shut off the heating in Mantle, but his antics are well and truly exposed, thanks to Weiss’ mother Willow. For Jacque Schnee, his empire is about to come crumbling down around him.

With the heating switched off in Mantle, snowfall begins and people start to panic. Maria and Pietro watch on in silent dread as the citizens start building giant bonfires to stay warm. But, to the Atlesian soldiers and androids, they look like they are rioting; and that is exactly what starts to happen.

The grilling of General Ironwood continues at the Schnee estate. Councilmen Sleet and Councilwoman Camilla criticise Ironwood’s unilateral decisions, while Jacque looks on rather satisfied. But, the smirk is wiped off his face when a servant informs him quietly of the heating, which was switched off on his authority. Jacque is particularly shaken, realising who and what is to blame, but tries to act calmly.

Robin theorises that Ironwood is afraid of something or someone, asking him to tell the truth through her Semblance. Weiss bursts in with all the ferocity of a stealth bomber, carrying with her the evidence that her father is in league with Watts. Sleet is shocked, stating Watts died in the “Paladin incident”, likely referring to the development of the Paladin mechs. Weiss plays the surveillance footage, and it damning for Jacque, who virtually squirms as it plays.

Jacque and Watts’ conversation from earlier in the volume plays out in full. Watts promised to help Jacque get a seat on the council, in return for his log-in credentials to the Atlas network. As such, Watts rigged the election, as well as framing Penny. While Jacque at first tries to claim the video is fake, he bolts for the door. He finds noneother than Weiss’ Armour Gigas standing in his way. Karma at its finest. For context, the “White” trailer saw Weiss fighting an Armour Gigas, thrown at her by Jacque as an obstacle to prevent her from going to Beacon. Now, here it is, blocking his way to freedom. Weiss declares her father is under arrest, whipping out her official Huntress license, though she does hilariously ask if she actually can nick her dad.

The rest of Team RWBY and Oscar join the doomed dinner party as Jacque is interrogated. Ironwood remains surprisingly calm whilst going over the truth revealed to him, though Robin rages when Jacque tries to claim innocence. The council learn that Watts has turned off the heating, Jacque informing them that the network has been made inaccessible. Ironwood starts to strategise out loud, mentioning Amity is secure, and even alludes to Salem as well. He and Team RWBY suggest getting him out in the open and exposing his access point. Robin, who has been listening, chimes in and begins to piece together what is going, mentioning Amity Tower, baffling Ironwood with her knowledge.

Down in Mantle, chaos ensues as people are rioting and burning things. They dismantle a platoon of androids, but then the warning alarms kick in. Cue an enormous army of mammoth-esque Grimm stomping towards the city, complete with Sabres and new dragon Grimm.

Robin realises that Ironwood was trying to keep everyone safe, rather than just Atlas, hinting at a union between them at last. Clover informs Ironwood of the Grimm invasion, prompting the poor general to start panicking. Oscar steps in to offer his advice, though Ironwood feels his plan to inform the world of Salem may be in jeopardy. Oscar tells him that he should just tell the truth, backed up by Ruby. Ironwood asks Oscar to return to the academy, and decides to tell Sleet, Camilla, and Robin about, well, everything. He intends on taking care of Watts and Tyrian, while Team RWBY and Penny are to help Mantle.

Everyone races out the room, though Ruby takes time to stop Oscar for an adorkable conversation, both agreeing they should tell Ironwood their own secrets. Oscar decides to do it, since Ruby is needed elsewhere. On a jet down to Mantle, Clover prioritises saving citizens over killing Grimm. The whole gang are onboard. Nora and Ren have a moment together, though their relationship hasn’t been entirely patched up. Blake and Yang’s seems to be the more healthier one at the moment. Interesting how the two pairings have swapped roles.

Robin, Sleet, and Camilla are left reeling from Ironwood telling the truth. But, not as horrified as Ironwood is after Oscar tells the truth about Salem and Jinn. Oscar apologises, since the gang didn’t know who to trust, Ozpin fearing the loss of hope if Ironwood knew the truth. However, though shaken, Ironwood prioritises saving Mantle. Oscar comments that Ironwood is bringing the hope that Atlas was meant to create, “a city in the sky is held to a higher standard.” Ironwood is surprised by this comment, commenting that Oscar sounds like he was there. It looks like the merging of Oscar and Ozpin’s souls might be happening a little quicker than we thought.

Team RWBY’s ship gets attacked by dragon Grimm, so everyone opts to jump out, in their team assignments. We see Ruby and Harriet are together, though Qrow and Clover are surprisingly going solo. In the Schnee academy, Whitley and Willow watch as Jacque is dragged out in handcuffs. Whitley runs off upstairs, once again left alone by his family. But, whilst Willow watches on with some sorrow, a maid in the manor strolls right on out into the night, skipping away.

She goes to an apartment or hotel room overlooking Atlas, where we find Cinder Fall waiting for her, still wearing her huge eyepatch, with her clawed Grimm arm on display. The maid turns out to be Neo, having infiltrated the Schnee manor. Cinder excitedly asks her partner in crime if she has found what they are looking for. Neo gives a playful, knowing smile. It is about time these two got in the game, but what have they been looking for? Ruby? The Winter Maiden? Cinder is a powerhungry nutcase after all, and getting her butt whooped by Raven likely pushed her only more to seek power.

Does this mean that Volume 7 will actually see the fall of Atlas? We still have four episodes to go, and anything could happen. The next episode may reveal what Cinder and Neo have been up to since arriving in Atlas, but the battle for Mantle will be the likely priority.

Did you like this episode of RWBY? Will our heroes save Mantle, or will Atlas fall in the process? What are Cinder and Neo after? Leave a comment below, or on our Twitter and/or Facebook feeds.