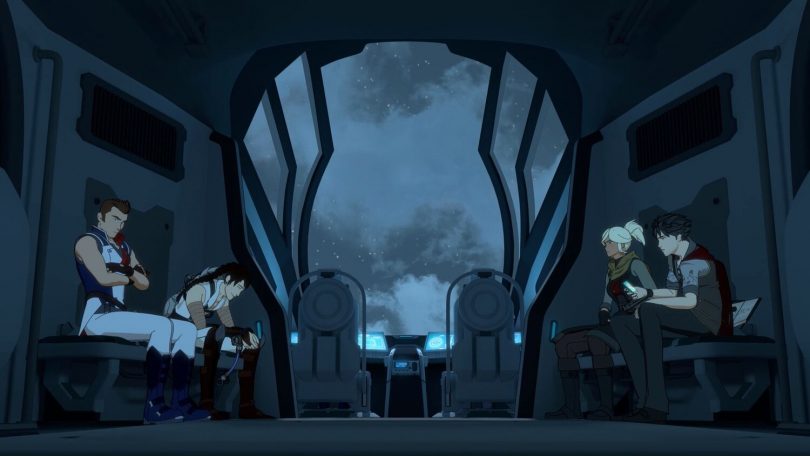 Loyalty is an important part of being a hero or a leader, coming in many forms. But, how far can loyalty go before it becomes blinding? Such a question hovers over RWBY’s seventh volume like a dark cloud, especially in this intense episode. Following General Ironwood’s decision to abandon Mantle and raise Atlas into the heavens, Team RWBY have been placed under arrest. Ruby, however, managed to inform Team JNPR, Winter, Penny, and Qrow’s group of Ironwood’s misguided plans.

A minor criticism of “With Friends Like These” is that certain character make questionable decisions. There is a lack of logic in some choices and actions made, but they may be justified. Emotions are running high and loyalty is in demand, but not everyone is willing to fall in line under Ironwood’s orders.

We’ll split the episode down into each individual story arc. Team RWBY get the most fun in the episode, taking on and destroying the Ace Ops in a crazy battle. The conflict shows just how tightly-knitted and strong our girls have grown, but in contrast, just how flawed the Ace Ops are. With Clover’s guiding hand, the other four are a complete shambles. Harriet mentioned back in earlier episodes that she and her teammates weren’t exactly friends. That echoes through this fight.

Harriet is hellbent on taking Ruby down, convinced the team were always plotting to betray Ironwood. Ruby is able to use her hand-to-hand combat to good use, even if its for a fleeting moment. Meanwhile, Elm is charging around the place like a rhinoceros maddened with rage, apparently taking Team RWBY’s rather minor betrayal very personally. Vine and Marrow are much more reluctant to the conflict, wishing for a peaceful end. Harriet catches Marrow fighting Weiss defensively, the two bickering about the use of excessive force.

The lack of camaraderie between the Ace Ops is poisonous to their own teamwork, mirroring Team RWBY’s success and trust in each other. This ensures their victory. Harriet is off doing her own thing and being overly competitive; Elm’s bull-headed tactics are doomed without Vine’s wisdom, but he lacks her strength in turn; while Marrow remains conflicted, revealing his Semblance can only be aimed in one direction at a time. The Ace Ops have not had much development as character, with the exception of Marrow, but this battle reveals some of their deepest personal flaws.

Combat wise, the action is great, fast-paced and hectically exciting. Blake and Yang’s battle has to be the best, paying visual homage to Taoism and its symbolic use of trust and unity. Yang’s finest hour comes when she smashes up the floor, rendering Elm’s Semblance useless, before taking her out with her own, the first time using it in the volume. Beautiful stuff. Maria and Pietro show up after the fight to lend a hand.

Elsewhere, Team JNPR are on the hunt for the missing Oscar. They run in him, though it is obviously Neo in disguise. Yet, she has managed to steal the Relic of Knowledge from him. Cue the real Oscar thundering down the corridor, punching Neo right out of her disguise. This is somewhat baffling, considering not a single character has landed a blow on Neo yet. This sets up the fight for next episode.

Third, we catch up with Winter and Penny, on their way to extract the Winter Maiden’s powers from poor Fria. Ruby’s information has left the two women in conflict; not necessarily with each other, but with their own feelings. Penny is adamant, even furious, that abandoning Mantle is wrong. Winter finally addresses her own opinions, agreeing that the decision is wrong, commenting that you must wrestle with your feelings to know that you are doing the right thing. Nevertheless, she is convinced that they are doing the right thing.

They press on to Fria’s room, placing her in the aura-transfer machine. Unfortunately, Cinder comes calling to add another maiden’s power to her collection. Winter makes the wise choice to retreat, since she is no match for a maiden, but Cinder just blasts her way through the door. Penny is looking for a fight, angered at Cinder’s actions in Beacon. This will certainly be a dramatic showdown between the three women. More importantly, the Volume 7 finale may decide who inherits the Winter Maiden’s powers – Cinder, Winter, Penny, or someone else?

Qrow, Clover, and Robin successfully arrested Tyrian last episode, but their victory is soured by Ruby’s panicked warning. Things only get worse when a warrant is put out for Team RWBY, JNPR, Oscar, and Qrow. While in any normal circumstances, Clover would discuss Ironwood’s decisions, but instead opts to arrest Qrow then and there. Robin ends up kicking off a fight between the three allies. Tyrian escapes his cuffs, kills the jet’s pilot, and causes it to crash whilst screaming his devotion to Salem. Clover leaps out the plane at the last minute.

Everyone survives, though Robin is rendered unconscious. Clover tries to convince Qrow to surrender, so they can get Robin some medical treatment. Qrow is particularly jaded by Clover’s decision to follow orders, though the lucky guy states that he owes Ironwood his life. Qrow’s cynicism and distrust towards others comes back in force, in a rather harrowing moment of despair, makes the decision to team up with the agitating Tyrian to take down Clover!

It should be mentioned during all this, Tyrian woke up in the plane, deliberately dislocating his thumb in order to wriggle out of his handcuffs. This guy’s a lunatic! So hurt by Clover’s decision, Qrow is willing to join forces with his enemy to defeat him; though Tyrian and Qrow do acknowledge they also do it so they can have their grudge match. Still, it is strange that Qrow would be willing to work with Tyrian, after he poisoned him and tried to kidnap Ruby. Clover’s decision to prioritise Qrow over Tyrian makes no sense. Why disable a perfectly good fighter and friend, and allow the serial killer to run amuck?

Qrow loses his weapon, Harbinger, deciding to just break Clover’s Aura by punching it. Tyrian then runs Clover through from behind using Harbinger! Unfortunately and tragically, Clover’s luck ran out, defeated by his own sense of loyalty and questionable decision making. Tyrian flees, setting up Qrow as the fall guy, since his sword is covered in Clover’s blood. Clover manages to renounce his devotion in his last minutes, Qrow vowing that Ironwood pay for his actions. However, poor old uncle Qrow is in for a very, very hard time, howling to the sky as his friend passes away. Qrow may not be arrested, though it seems the likely outcome, considering Ironwood’s frame of mind. Robin may be able to vouch for Qrow, but the set up by Tyrian is perfect.

While certain decisions in the episode are a little sketchy, it doesn’t deter from the overall enjoyment. It is the grand finale of RWBY Volume 7 next time, and there is still much to wrap up before this dramatic season is over.

Did you enjoy this episode of RWBY? Were the decisions taken the right ones? Who will get the Winter Maiden’s powers? Leave a comment below, or on out Twitter feed.