Set in the year 2060, Duplicant contributes to the subgenre of Biopunk. Currently crowdfunding on Kickstarter, its means of executing a plot is reminiscent of an art-house style, with its author Karla Nappi allowing for these interesting weaves of character and explorations. Within the first issue, we are introduced to the book through the funnel effect of being explained of this massive organ pandemic that wreaked havoc upon the human populace. This, in turn, results in this horrid social divide. In this miasma, the victims of the plague become indentured servants to the corporations that are purported to help these people. A clear nod to the American healthcare system, and a fine critique it is. Acclaimed scientist Matt Travers was able to generate organs that places people in massive debt to the corporations. This debt results in people practically becoming slaves to people so that they may sold to the highest bidder.

At its molecular level, Duplicant is this pointed truth to power. Consistently, it’s a showcase of the depravity that corporations and bureaucracy. From top to bottom writer Karla Nappi proceeds to goes from the macro to the micro by having the reader follow a duplicant. Duplicants are the people who require new organs following this pandemic of massive organ failure. Throughout the processing of these events, we see the protagonist of issue one struggle from being healthy to become an unwilling victim of the depravity that is wrought from this system. 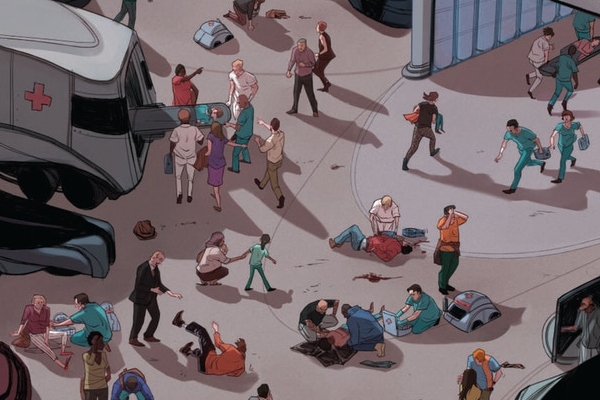 The art by Marianna Strychowska lends itself to a unique reading experience. While it’s one thing to have a classic comic book art style, this book lens itself to an interesting assessment of figures. Each panel is a photograph that covers these stilted versions of people. In earnest this stilted posing of these characters enhances the reading because it consistently places the characters into this new biotechnological world they must now live in. It enables the consistency of odd social mores that are always described or visualized in other works of dystopia.

Moreso, the letterers Carlos M. Mangual and Josh Reed, linework  and colours from cover artists Leila Del Duca and Owen Gieni give further precedence to a strange reading experience. The combined colour and linework almost act as if it’s giving the story a different filtration by which to experience. Even more, is that the lettering allows catching varied tangents of characters speaking and lets the reader see how the technology has influenced this narrative.

The fascinating aspects of this story are the world-building portions. Sprinkled throughout this series are things like holographic funerals or even dream monitors. These all result in a unique world that makes us want to stay in as readers. It’s reminiscent of Blade Runner and Altered Carbon, but with a lot fewer neon lights being used to blind the reader. Here the future is kept minimal, and fairly dull in colour providing this visual cue to the mood that our character has been enduring. One of the best aspects of this series was that there genuinely wasn’t a sense of safety for the characters we have been following. Within the first two issues, there is a baton change of the protagonist within this story. It provides an exciting change of pace to be reading something that can dare to change characters whilst still serving an overarching story.

You can discover more about Duplicant via its Kickstarter campaign. Have you already backed the comic? Let us know in the comments section below or send us a Tweet!