Home » Mewtwo Strikes Back Evolution is a Nostalgic Trip 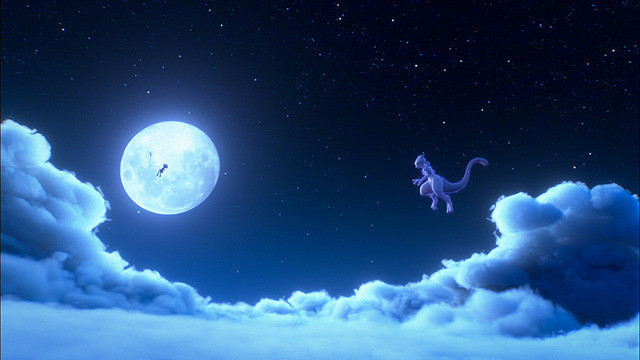 Mewtwo Strikes Back Evolution is a CG animated remake of Pokémon the First Movie. A beat-by-beat retread of the nostalgic first film, it has an improved English script, and some minor tweaks to the original story. But, for a film titled “Evolution”, the film does do really much evolving in its potential. Aside from extending a couple of scenes and altering previously choppy dialogue, nothing much has changed.

You probably remember the plot, but I’ll refresh your memory. Mewtwo, a genetic clone of the mythical Mew, is created by amoral scientists serving Team Rocket’s boss Giovanni. Having an existential crisis after being treated as a lab rat and a weapon, Mewtwo decides to get revenge of mankind and find a purpose through it. He lures Pokémon trainers, including Ash, Misty, and Brock, to his island base, clones their Pokémon to create an army to wipe out mankind and the Pokémon loyal to them. Mew shows up, and everyone has a heartbreaking brawl. Ash leaps in the way of Mew and Mewtwo’s attacks, turns to stone, everyone cries and resurrects him with their magic tears. Mewtwo learns a great lesson and leaves, wiping everyone’s memories of the whole movie.

The biggest change to the film is the use of CG animation. It certainly felt a little strange watching a familiar movie in a new animation style; or maybe not considering The Lion King remake last year, which I enjoyed less than this remake. At best, the new art style allows for different shots to be used, making the world more detailed, especially on the finer details. The animation looks best for the Pokémon and the scenery.

Our human heroes have rather squished faces. The transition from their normally 2D anime designs to 3D doesn’t quite. Brock probably comes out the best, having a very animated face and expressions. Ash manages to be treated well, especially in the familiar scene where he emerges through smoke to defy Mewtwo. He lacks the sass and laziness of his earlier characterization, adopting the more energetic and optimistic personality of recent anime seasons. Misty doesn’t really get much to do, and Team Rocket are around to provide laughs, though Meowth’s inspiring words about looking at similarities is cut from the script.

There are minor if noticeable changes to the English script. It follows the Japanese script closer, making Mewtwo a little more sympathetic than the original American adaptation. Dan Green returns to voice Mewtwo. Mewtwo remains the same character, driven by not just revenge but a need to find purpose and understanding of life. He regards captured Pokémon as brainwashed slaves, yet will not liberate them. He makes a dark mockery of the ways of Pokémon training through unfair battles and the use of bastardized Pokéballs to catch his victims. His only experience with mankind is from mistreatment, so he treats everyone else as such.

The movie strives to correct the notable mistakes and problems of the original dub. First off, the shoehorned “fighting is wrong” PSA is out, replaced by a more subtle message that Pokémon are living creatures and should be treated without cruelty. Certain scenes depicting jeopardy and danger are extended – the journey through Mewtwo’s storm, the gym match and subsequent capture of all the Pokémon, and the big brawl between them and their clones. It certainly adds to the reinforced themes of averting mistreatment through compassion and love. Although, Mewtwo’s decision to erase the cast’s memories does, once again, make any lessons learnt irrelevant.

Smaller tweaks were included, such as correcting the misnamed Pokémon, and erasing the absurd attempt to explain why the Pokémon can revive Ash with their tears. Even the dated “Minnesotan Vikings” joke is dropped, with Team Rocket posing as ferrymen in a Lapras-shaped aqua taxi, rather than as generic vikings. Surprisingly, the infamous jelly-filled donut cultural mistranslation from the anime gets a shout out as a throwaway gag.

The score by Shinji Miyazaki remains, bringing some fantastic music to the movie’s most pivotal scenes. A woman singing in operatic sorrow during the battles, and then Ash’s revival, really bring back the heartbreak felt as a child. Ash’s death sequence somehow became even more harrowing, particularly with the addition of Pikachu’s mournful wails. Nostalgia does carry a lot of the appeal of the movie. But, that also provides a problem with the film.

Being a straightforward remake offers little room for growth or to explore different character decisions. Mew remains cute but obscure as a character. For being a source of Mewtwo’s central conflict, Mew remains disconnected from the whole story. A different level of interaction or relationship with Mewtwo, beyond beating each other up, would have been worth exploring. Mewtwo never discusses the way of life with the humans or Pokémon, nor do they attempt to show him the positives of the two species’ special relationship.

Beyond nostalgia, and the varying quality of the CG, Mewtwo Strikes Back Evolution doesn’t bring much new to the table. It is a sweet tribute to the original movie and is a solid film in itself. A post-credit scene hints of a remake of the sequel Mewtwo Returns. Does this mean other Pokémon films will be remade in CGI? If so, it would feel unnecessary.

Have you seen Mewtwo Strikes Back Evolution? Was it better than the original or a disappointment? Leave a comment below, or on our Twitter feed.