I’ve always thought that there is nothing better than mixing the dark, the tragic and the absolutely hopeless with the comic. It might sound like an oxymoron, but there is something therapeutic in being able to laugh during extremely tense moments. I find it helpful because you learn to laugh and deal with real life problems at the same time. Sure, we have to deal with pandemics, murder hornets and whatever else 2020 has in store for us; but that’s no excuse to reject humour. Blood n Concrete #1 , currently crowdfunding on Kickstarter, is a supernatural tale set in the same place, London, during two very different times and different people. Recently launched on Kickstarter, the authors of this comic book are: Ray Dillon (art & colours), Michael Okoroagha (colours), Rob Jones (letters), Andy X Jenkins (writers), Colin O’Mahoney (story editor).

Blood n Concrete begins in London, 1966. The whole city is in trepidation for the World Cup Championship final. Meanwhile, Norrie ‘Nutter’ Harris is getting ready with his gang to steal ancient Egyptian valuables from The British Museum. We then meet  Rob and his friends; we are still in London but is in the present day. Rob is a regular guy who had a bad year and is struggling to get back on track. Rob’s friends are very supportive; but he has made some bad choices and is in need of money. He has to pay for his studies, rent and some sketchy individuals. Rob finds out he can make good money by joining a medical trial, and he does. The medical trial goes well, and Rob has never felt better; apart from a minor side effect… It seems like past and present are colliding from time to time.

Blood n Concrete is idiosyncratic in its nature, due to the authors’ choice of combining these two storylines. On one side we have a bunch of gangsters from the mid 60s planning a rob, which couldn’t be farther away from our reality. On the other we have a young adult who is struggling in a contemporary London; and his story hits closer to home. When I first found out there were going to be these two storylines, I didn’t know if they were going to work. I knew the plots had to converge at some point, but the authors managed to make it happen organically and with a skilful use of imagery. In addition, it’s established quickly and effectively that the stakes of both plots are pretty high, which makes the story even more exiting.

We understand from the get go that Norrie and Rob are the people we need to keep an eye on. We must fear Norrie and empathise with Rob. Although I think the writer did a good job in creating these characters, I do have a stronger sense of who Norrie is in comparison to Rob. With this I mean that I was able to understand Norrie’s character while listening to him talking to others. With Rob we mostly get a sense of who he is from his friends. In fact, we hear from them that Rob has hit rock bottom; and that is pretty much all we know about him. We don’t get to know much more about his character and personality by listening to him or watching him. 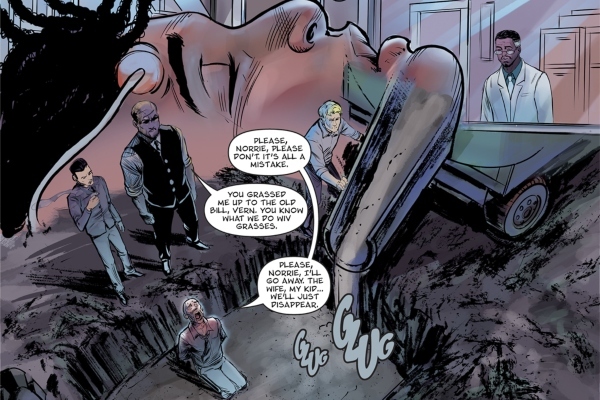 On the other hand, it’s hard to show the subtleties of a character’s personality and establishing the world of the story at the same time, since the first issue of the comic is a relatively short tale. There is a chance this is all we need to know about Rob for now; we’ll get to know him better as the story unfolds in the following issue.

What I liked the most about Blood n Concrete is the sense of humour that permeates the whole story. Apart from the banter between characters, what I appreciate the most is the use of slapstick comedy bits throughout the book. It can be argued that slapstick/physical comedy is not really a sophisticated or “elevated” type of humour. I agree, it’s generally not, but it depends on the context. For instance, slapstick is an effective means to mitigate violent scenes; and you have a moderate amount of violent scenes in Blood n Concrete. When you use slapstick in certain instances, like a car chase scene between gangsters and the police, it can even have a cathartic result if well executed.

There is a clear and purposeful colour contrast between the two timelines. Some of the darker parts of the 1966 timeline remind us of the dramatic atmosphere of Van Gogh’s earlier paintings; The Potato Eaters amongst them. There are some powerful close-ups in both timelines, and the figures are effectively foreshortened; and that contributes to the dramatic effect. In addition, we see a nice play between the black crosshatching and the colours underneath. Often you have the colours applied in flat blocks under the black outlines, but here the colours are applied in a painterly way. This, in addition to the crosshatching, builds the three-dimensionality of the images.

I enjoyed reading the first issue of Blood n Concrete and I’m curios to read the next one. I would definitely recommend it if you’re into horror/comedy comics with a touch of supernatural. The story is amusing and filled with mystery, however, there are some violent scenes. The violence is never gratuitous, but I would keep that in mind in case there is a certain sensitivity to it.

Are you exited to read Blood n Concrete? Sound off in the comments or send us your thoughts on Facebook or Twitter!