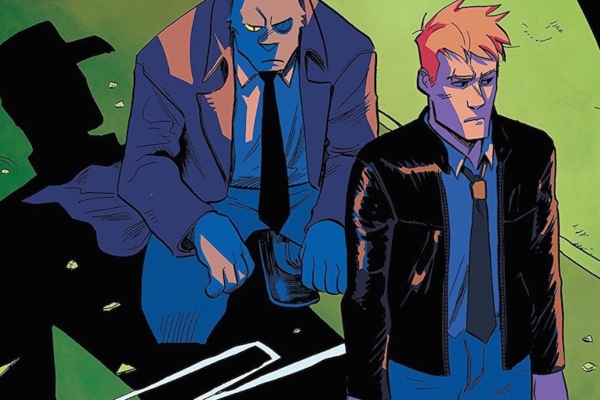 Spencer & Locke seems to be one of those comics that was probably born out of a pub conversation. “Hey, what if Calvin grew up and he still talked to Hobbes and they solved crimes together?”

If that was as far as the premise went, Spencer & Locke would have been a good comic. What makes it a *great* comic is the fact that the creators – writer David Pepose, artist Jorge Santiago Jr, colourist Jasen Smith, and letterer Colin Bell – took the spark of that idea and ran with it like they were trying to win a game of Calvinball.

Spencer & Locke tells the story of Locke, a boy who had a less-than-perfect childhood and so retreated into his own fantasies, joined on his adventures by stuffed blue panther, Spencer, who he imagines coming to life in the same way Calvin brought Hobbes to life. Except that now, Locke is all grown up and working as a cop, with Spencer as his partner. Think Frank Miller writing a Tracer Bullet story and you’ll get the general idea.

The plot of volume 1 centres on Locke solving the murder of his childhood sweetheart Sophie Jenkins (an ersatz Susie Derkins). During his investigation, he meets with characters that any Calvin & Hobbes fan will instantly recognise as dark versions of teacher Miss Wormwood, babysitter Rosalyn, and bully Moe. More than that, there are clever references to Calvinball, Calvin’s trademark snowmen, the original pair’s wild red wagon rides, and, in one of my favourite issues, we get to see Locke as Rocketman Reynolds, his version of Spaceman Spiff.

There’s more to Spencer & Locke than just clever Calvin & Hobbes references. The story takes a very real, and very dark, look at what would have to happen to a person for him to carry around a stuffed panther as a grown man – and carry on conversations in public with him. Some of the most harrowing panels come from the flashbacks to Locke’s childhood, where the artwork shifts to mimic Bill Watterson‘s trademark style. It’s an effective and impactful artistic choice. We’re used to seeing this style reserved for playful, joyous scenes, and I never thought I’d see it used to depict scenes of rape and murder.

The visuals are rather stupendous throughout the series, and it’s not just the artwork itself. It’s rare for me to comment on the lettering in a review. I think of it like a burger bun – you only ever notice it if it’s really bad or really, really good. And not noticing it at all is a good thing. But in this, the lettering is done in a way that really adds to the overall story, and I felt like giving a shout-out to Colin Bell for his work on it. Locke’s internal monologue appears as if written in a child’s lined notebook, breaking one of the main tenants of good lettering by using both capital and lowercase letters. This then changes to a spacey green-yellow when Locke takes on his Rocketman Reynolds persona. Both of these choices add to the idea that Locke is stunted, a child in a man’s body.

Of course, the rest of the artwork by Santiago and Smith is also brilliant. The scenes in the present are dark, Frank Miller-esque, full of shadows. The action is very kinetic, perhaps best seen in the car chase in Issue 2. I also can’t stop talking about the Rocketman Reynolds scene, where the colours really come into their own.

If there’s one place where the comic fell down for me, it was the character of Augustus Locke, our hero’s father. I would have liked to see a bit more of him. I just felt the part of the ending that involved him didn’t quite stick the landing. And Augustus calling Locke “Locke” also took me out of the story. It could be down to Augustus never appearing in the flashbacks, but I just never got a handle on the animosity between father and son. But really, it’s a minor gripe in an otherwise outstanding book.

If, like me, you grew up reading both Calvin & Hobbes and Frank Miller’s work on Daredevil and Batman, then this is the book for you.

Have you had a chance to read this dark take on a beloved, nostalgic series? Let us know in the comments below or send us a Tweet!