From creator Hiroshi Koizumi, writer Eliot Rahal, artist Dike Ruan, colourist Miquel Muerto and designer Tim Daniel, Vault Comics’ Bleed Them Dry is, in many ways, exactly what you’d expect from any good detective drama. From the first panel, we have an unusual case, a killer with a vendetta and a distinctive style. Then, throughout the whole first issue, there’s plenty of disappointing coffee, a heaping helping of detective partner banter, just enough of our protagonist, Detective Halloway, getting chewed out by the chief, and even the obligatory, “maybe I can’t sleep because I quit drinking.” This is all well and good; it slakes a deep and morbid thirst many of us abide, to see grizzly events and then see them brought from the grimy underworld into broad, just daylight. However, it’s in the ways that Bleed Them Dry isn’t your typical detective drama that it really starts to shine.

Bleed Them Dry is about vampires in a gloomy, neo-Noir future city called Asylum. A serial murderer is targeting vampires, and it’s up to mortal Detective Harper Halloway and her undead partner Detective Atticus Black to find out who, and why.

I’ve often wondered why we never see vampires in science fiction. Most vampires stories take place in the near past, or maybe the present day, but despite their immortality, something always seems to have come along and wiped them out before humans create artificial sentience or colonize the moon. Bleed Them Dry vindicates my yearning, as it proves that the bloody, nocturnal, elusive aesthetic of the vampire marries the bloody, nocturnal, elusive nature of Noir (although perhaps drawing more from the Blade Runner and Altered Carbon end of the spectrum than the City That Never Sleeps end) with an almost uncanny sympathy, and the frightening inhumanity of an eternal techno-city skyline evokes the Gothic horror that has drawn readers to vampires again and again. 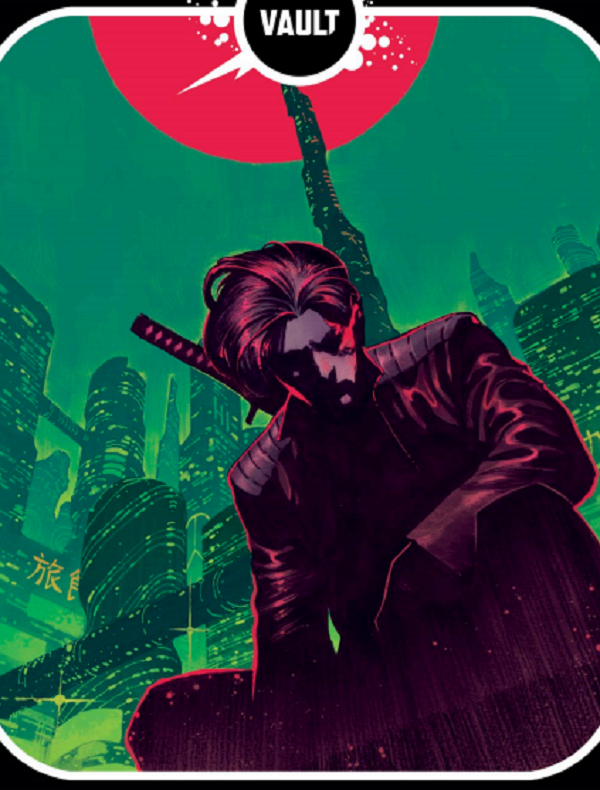 Beyond the metaphorical implications of the visuals, however, it must be said: the art is drop-dead gorgeous. Ruan has demonstrated a versatility and a clarity of vision to be applauded. The vampires are distinctive, yet still feel at home in the world of Asylum, and appear appropriately horrific or charming as required. Detective Halloway exudes “no-nonsense detective” vibes, but can still break out into the occasional endearing smile, beautifully rendered. It’s not only Ruan’s line work that sells the visuals of this comic, though. Muerto strikes a chord that works. Oppressive reds and calm blues code each scene both in mood and in mystery, and occasionally they mellow together into a malingering purple, or jar against a shock of teal. Ruan and Muerto make the perfect team for Bleed Them Dry, and I expect future issues will only up the artistic ante.

Detectives Halloway and Black find answers. Well, some of them, at least, but they’re Asylum cops, so they’ll have to settle for some. Right as it seems things are wrapped up neatly, with a little blood-red bow on the top, things go sideways, and we are left with a promise that nothing so far has been as it seemed. That little taste of chaos to come has left me wanting to know what happens next. I’m sure you’ll want to know too.

You can discover more about Bleed Them Dry from Vault Comics. Will you be sinking your teeth into this particular title? Let us know in the comments section below or send us a Tweet!