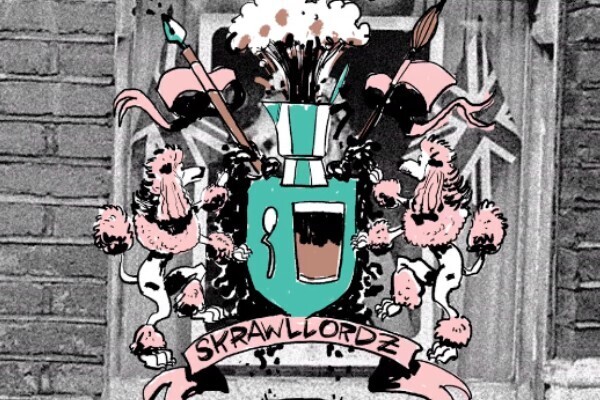 The British independent comics scene is indebted to anthology magazines like SKRAWL. In the words of Russell Mark Olson, they’re a grand British tradition. Indeed, these magazines spotlight vibrant indie creators and provide a unique opportunity for them to cross-pollinate their talent and insight. With its core team the SKRAWLLORDZ and a cavalcade of talent from the British indie comics phonebook, SKRAWL #1 looks to live up to this tradition. You can currently follow the development of issue 1 on Kickstarter, and we caught up with editor Russell Mark Olson to hear how and why SKRAWL came to be!

A Place To Hang Your Cape: How have the SKRAWLLORDZ come together?

Russell Mark Olson: You’ll have to get the real story from the SKRAWNICLER, Pete Taylor, but the version we’re legally allowed to share is this: the six of us, Martin Simpson, Mark Hughes, Gustaffo Vargas, Nick Prolix, and Pete all shared an AirBNB for the weekend of LICAF 2019. Several of us had been friends previously, but we had never all been in the same room like that before. Through talking about process, the state-of-affairs at the time, the industry, getting books out, we realized we all had a lot in common, and a support network was a natural conclusion.

Throughout the next couple of months, we shared work with one another, gave feedback on art and scripts, and just generally did what friends do, make jokes, give support, encourage each other. It’s a great group with a lot of heart.

AP2HYC: You’ve cited other comic anthology magazines (Escape, Revolver) as influences on SKRAWL. What do these types of magazines provide that you maybe don’t get in comics elsewhere?

Olson: The word “magazine” has a certain curatorial ring to it that I feel is established and accepted by the general public. A magazine can flit between articles, photo essays, interviews and just about anything else on a dime. Nobody worries about it. All of these disparate pieces are held together by a strip of glue and a cover. Fine. We’re okay with that. If you put a bunch of comics together, they become an anthology. Nothing wrong with that, but there’s an inherent separation. The great comic magazines have something a bit more. Some of that connective tissue that you find in a magazine. Some of that probably has a lot to do with semantics, but I think we expect a bit more from a magazine. And therefore, magazines can take more risks.

That’s what I think about when I think about mags like Revolver or Escape. Short form storytelling, long form storytelling, authors talking directly to the reader, an editor laying out an ambition, and a bit more paper real estate to play with. I suppose they’re also cool. They live at the edges of the industry. Revolver is a great example. It was in the 2000AD family, but somehow managed to latch onto the Britpop zeitgeist in a way that Dredd and Co. just weren’t designed to do.

There’s a lot to unpack, most of it probably linguistic, about what makes this a great format. What I think can be asserted is that they do provide something else. Something a bit riskier. 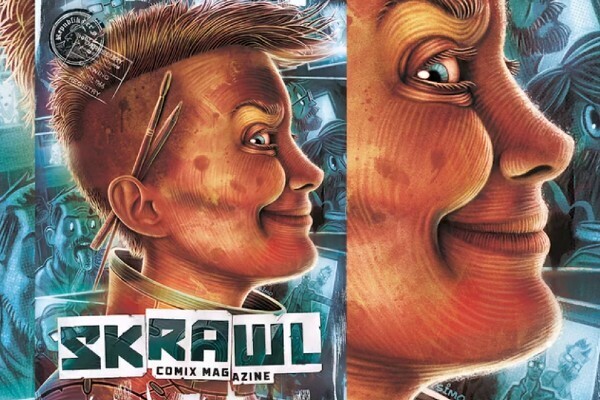 AP2HYC: The variety of comics in the first issue of SKRAWL look to be very diverse. Would you say that’s the case, and how do you decide what stories work together in one magazine?

Olson: This is still in the experimental phase for us. Something Pete set up for an earlier incarnation of this project was to establish a theme word. For this he picked “Renaissance.” I doubt you’d be able to glean it from the pages if you didn’t know it, but it’s a germ around which other ideas can grow.

For the first issue, I think we’re a little less concerned with the book having a style and more about representing a moment in the UK comic scene. We’ve got established folk like Mark Stafford, John Reppion and Lucy Sullivan. Phil Elliott from the Mount Rushmore of the UK indie scene. We’ve also got up-and-comers like Rosie Packwood and Matt Simmons.

We’ve been asking a lot of questions as this project grows and some of those answers have come about organically. But is it diverse? Yeah, yeah it’s going to be very diverse. I think that’s a good thing for issue 1. We want to draw in as many possible readers as we can. We want fans of Rosie to get to see Lucy’s work. We want folks who dig Mark Stafford and Gustaffo Vargas to discover Martin Simpson.

The one area where we have been a bit selective, if that’s the right word (we’re definitely not gatekeepers nor have any right to the title), is in giving folks with a distinct voice a platform to use that voice. Everyone who’s in the pages of the first issue of SKRAWL has a personal swagger, something unique which sets them apart from other creators. I think we’ve got the mix right, but hey, time will tell. And Gustaffo speaks wisdom when he says “with anthologies, you’re not going to like every comic. But some comics aren’t made for you, and that’s fine.”

AP2HYC: How much oversight do you have of the new comics as editor? How much free reign do you get to give artists, writers and cartoonists?

Olson: I’m still finding my way with this. We’ve approached people who have a lot of experience and who, I believe, you could give a crayon and some masking tape in the middle of the Arizona desert and they’d still come up with something brilliant and define-ably them. A few have asked for parameters, or have shown me sketched out ideas for multiple different ideas and we’ve discussed how they’d work and which would fit the format best. We’ve set up a Slack channel where work in progress gets uploaded and as a group we’re able to comment, make suggestions, give encouragement, and act as a sounding board.

I’ve tried to stay away from the iron gauntlet of Kurtzman, but once we moved towards launching the Kickstarter, I think it just made sense to put someone on point. I work in a school and so with it being summer hols, I’ve got a bit more free time than the others and I think it was a logical conclusion. I suppose I have some shape of what I think a successful magazine would look like squirreled away in my head, and so there is a boundary between what would work in SKRAWL and what wouldn’t but overall, when you’ve got folks like this on the pages, you want them to push the boundaries a bit and explore. To experiment and have fun.

AP2HYC: What are some of the most experimental comics in the first issue?

Olson: Gustaffo has done his entire strip in watercolors and they’re like jewels. I’ve done mine in marker, trying to grab that silver age/bronze age aesthetic. Prolix is currently knocking out an improvisational comic about racist imagery, colonialism and Cypriot history. We’ve got John Reppion writing a short folk horror story and Lucy Sullivan illustrating it. Matt Simmons is over in the corner with a xerox machine, some tape and a camera. You’ll get some conventional stuff, but you’re also getting plenty of surprises. I think this mag is going to feel very “of the moment.”

We’ll also be featuring a few non-comic things, like a feature on the NHS artworks that both Mark Hughes and Nick Prolix have been creating (and in Nick’s case, sadly continue to create) to chronicle the tragedy that has been the handling of Covid-19 and the heavy price our healthcare professionals have paid to keep up with the pandemic.

AP2HYC: What types of comics are you looking to showcase in #2 and onward?

Olson: Collaboration. We want the lines of individual creation to blur in the next issue. We’ve talked about putting names in a hat and building creative partnerships that way. We may also see a few longer form stories finding their way into the mix, episodic stuff.

I hope that we’ll also be able to continue with showcasing talent from across the professional spectrum. We’d like to take some of that LICAF ethos and look internationally. Both in terms of dissemination as well as on the page. Now would be a great time to build some bridges with our European counterparts. Wouldn’t it be great to show our Ninth Art loving cousins some of the best stuff coming out of the UK scene right now? And vice versa?

Swell, is what I’d call it. Downright swell.

You can discover more about SKRAWL via its Kickstarter campaign. Have you backed the magazine? Let us know in the comments or Twitter!