Home » Dump #3 Captures DIY Comics At Their Most Natural

We’re pretty familiar with David Robertson‘s output of comics on AP2HYC, and yet at the same time, we can never quite predict them. Robertson’s style blends the mundane with the surreal, produced in a visual manner that never draws attention to itself. Even when treading into complex thematic territory, Robertson’s muted, striped back visual style allows his comics to always avoid being overblown or pretentious. That approach is heavily at play in the third and final issue of his ongoing series Dump, a comic that features Robertson’s usual brand of sequential oddities with guest appearances by other artists, but succeeds in being a unique entry in his back catalogue.

Robertson produces comics at an alarmingly quick rate. Since this third issue of Dump in 2015, we’ve had such titles as But a Dream!, Break the Cake, Bell Time, Wow! Retracted and Mount a Rescue (his most recent comic). As such, more recent comics saw Robertson sharpen his trademark narrative and artistic skills, making Dump #3 a looser read than what had come before. The ideas and premises presented in Dump #3 shows that Robertson’s interesting depth as a story-teller have always been apparent. Compared to more recent comics however, they don’t quite have the same impact. Opening strip Things To Do At Three O’Clock In The Morning is a quietly tense, robust affair, yet closing strip Dump feels like a prototype of other long-form stories that populate Robertson’s comics, and ultimately have a more well-tuned personality to them. As a closing strip, Dump lingers a little too often for its own good. 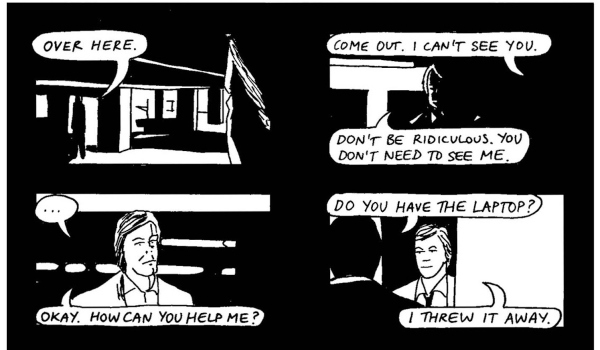 What remains pleasingly apparent with Dump #3 is the DIY nature of Robertson’s out. Even with the contribution of other artists lending Robertson’s stories different angles, the homegrown nature of this comic gives it a low-key charm. This is furthered by the November section of the comic, which consists of 31 one-page strips drawn as part of the 30 Days of Comics challenge. There’s an intriguing juxtaposition at play in Robertson’s line art. Sharper and cleaner with his other strips, yet more spontaneous and somehow natural-looking with this distinct section of the comic. Robertson’s art style has always prioritised simplicity, so it’s interesting to see the differences between the two with their subtle differences.

Dump #3 is a diverse curiosity from Robertson’s output. The ideas scattered throughout the comic would be refined and bettered in later comics, but for a creator whose brand of comics is centered around presenting his stories spontaneously, Dump #3 really doesn’t feel out of place alongside Robertson’s stronger titles.

You can discover more about Dump and Robertson’s other comics from Fred Egg Comics. Are you a fan of Robertson’s work? Let us know in the comments section below or send us a Tweet!