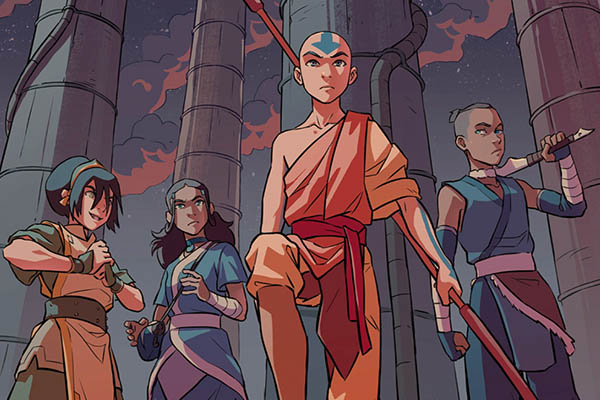 With the release of Imbalance, the latest graphic novel centering around Aang and his friends, comes a fresh makeover. Faith Erin Hicks and Peter Wartman replace Gene Yang and Studio Gurihiru as writer and artist respectively. But is assembling a completely new team enough to save this franchise of extended lore? Well, yes and no.

On their way back from visiting the Southern Water Tribe, Aang, Katara, and Sokka drop off Toph at Cranefish Town where her father’s company resides. However, what was supposed to be a simple day trip turns into a mission where Aang and his friends must resolve the tension forming between benders and non-benders.

Directly correlating with conflicts that arise in The Legend of Korra, Imbalance seeks to fill in many of the gaps between the two main series. Because this conflict is a little bit more directly tied with the conflict of season one of Korra, the plot may be a bit off-putting to some. But Faith Erin Hicks’ writing of the characters is so refreshing, it’s hard to fault this comic completely. While it’s true the ending will feel very unsatisfying (unless there ends up being a continuation of this story), the characters are remarkably in-character. There was always something off about Gene’s portrayal of these beloved characters but Faith remedies that almost immediately. There are very few instances where these characters feel off and there is little to no cringe phrases i.e. oogies and lily livers.

While the characters don’t look nearly as close to their animation counterparts as Studio Gurihiru’s work, Peter Wartman’s use of colours is hard to ignore. Every panel has a softness to it that’s impossible to ignore. And the character designs have a charm to them. Yes, it’s different but these characters have more life and feeling to them.

The advantage of Imbalance is that it tries to be something different. It isn’t trying to be an imitation of the television show through art style or writing but instead be an actual comic. It wants to have its own identity and readers can pick up on this from the very first page. Like all these comics, Imbalance possesses the fatal flaw of having a good premise with a dissatisfying conclusion. However, it’s a bit easier to forgive this glaring problem when there’s a definitive spirit imbued in every panel, something its predecessor sorely lacked.

If there’s one takeaway from reading these comics thus far it’s that you can’t re-create lightning in a bottle.  Avatar the Last Airbender was truly something special that isn’t easy to replicate. We don’t know what’s in store for us when the Netflix adaptation is eventually released but we can be sure that no matter what happens, it will never be the beloved series most of us grew up with. And that’s okay.

You can purchase your copy of Imbalance at your local bookstore or online. What have you thought of this comic series thus far? Let us know in the comments section below or send us your thoughts on Twitter!