Home » The Art of Trailer Editing: When Does Doctoring Footage Go Too Far? 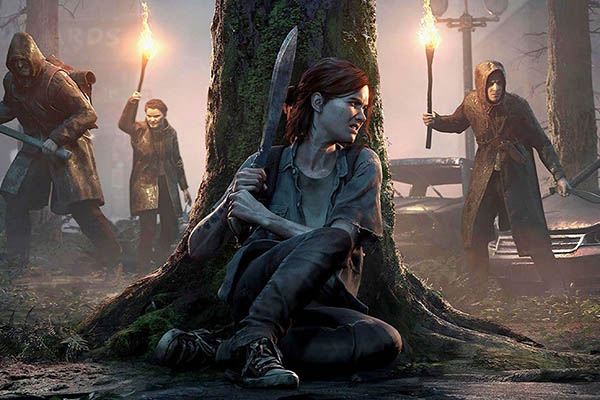 Over the years, trailer editing has become an art form of its own. It takes a certain talent to be able to tell a micro version of a much larger story yet leaving out enough details to entice the audience.  And only an extremely talented editor can make a subpar movie appear to be the greatest blockbuster of the year, encouraging the distributor to recut the final film to revolve around the tone of the trailer.

But there is one trend that seems to be becoming more and more commonplace in the world of trailer editing and that is doctoring footage. Now, this isn’t anything new per se; it’s not uncommon for trailers to include scenes or lines that never make it into the final film simply because the film is being cut at the same time as the promotional material. Nor is it uncommon for footage to be re-ordered in order to make it seem as though events are taking place a certain way only to find it much different in the final product. However, we’re now seeing footage purposely be tailored for the trailer in the hopes of throwing the audience off in regards to important plot beats and twists.

At first, this may not seem like an issue. But once again, our favourite game The Last of Us Part II caused much controversy with its heavy trailer manipulation and doctoring of footage. And here is when we begin to question when does doctoring footage for the sake of hiding plot points become too much, to the point of it teetering on false advertising?

Let’s first look at some more well known trailers that concealed important plot points in plain sight. Marvel is notorious for this through some VFX trickery. Below is one of their most notorious feats, depicting Thanos in the Avengers: Infinity War trailer having less stones than he does in the final film. 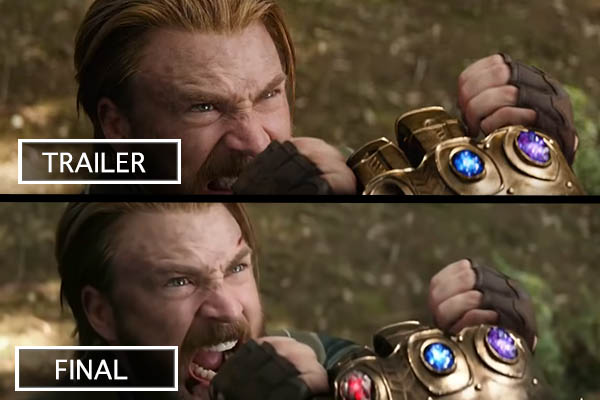 This is important because, for one, it attempts to conceal the fact that Thanos will be able to complete the snap in the first film. Keep in mind, this is just one example found in the trailer. At no point is Thanos seen with more than two infinity stones in the trailer despite the fact he gains all of them by the end of the movie. It also masks when the battle at Wakanda takes place chronologically in the film, which then throws off speculation as to the overall plot.

But this is by no means the first time Marvel has done this. A similar instance occurred in the Thor: Ragnarok trailer where VFX hid the fact that Thor loses an eye in this film. 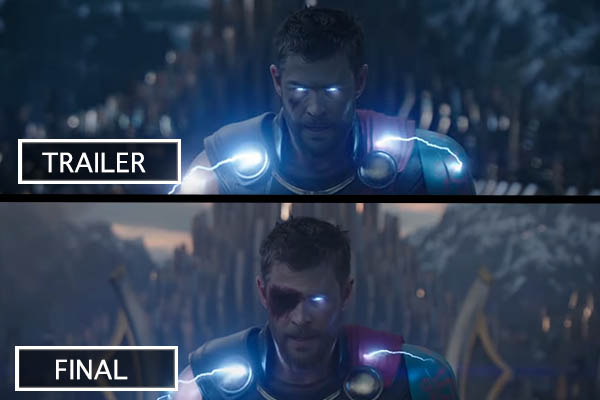 When these tricks were implanted, fans really didn’t seem to mind. In fact, you can make the argument that most were pleasantly surprised. But why were these instances considered acceptable? Well, for one, in the case of Infinity War a decent number of fans were already speculating that the footage was doctored in an effort to conceal how far along Thanos was in his quest throughout the film. They’re not trying to conceal a major death or a major plot twist. Most knew the snap would occur in this film, they just didn’t know where it would occur.

In fact, the Infinity War trailer made no effort to conceal a major character death. They could have painstakingly attempted to shove Loki in some shots that occur later on in the film to throw audiences off. But they didn’t. From watching the trailer, most could guess that Loki was going to die in the very beginning of the film and that’s exactly what happened.

And perhaps this is why there was no outcry from Marvel fans. Marvel only meant to conceal character arcs and the order of events through their doctoring; they have yet to try and purposely doctor footage to conceal the fact that a character dies early on in the story.

That brings us the The Last of Us Part II which did try to doctor footage so audiences weren’t aware just how soon into the game Joel dies. When the game was first announced in 2016, the reveal trailer features Ellie in a room playing the guitar after she has slaughtered a handful of people. Joel enters, asking her if she plans to continue down this path. From the beginning, the set up of the game was advertised as a story about Ellie seeking revenge and Joel accompanying her.

Look, things can change in the span of four years. A story can by then take on a new shape and form. But the fact of the matter is, Naughty Dog and Sony continued to play on the narrative that Joel would be in the game’s present timeline much longer than he actually is. Even an extended commercial that was released only a month ago from the writing of this article gives the implication that it is Dina who Ellie is trying to seek revenge for, and not Joel. What is shown in this trailer is not gameplay or in the game at all, it was purposefully animated for the sake of selling the product. This is very different from taking footage that already exists and manipulating it in a way that makes it look like events are happening differently.

Unfortunately, it doesn’t stop there as Sony also actively doctored footage that exists in the game itself. They accomplished this in two ways: one, by replacing Joel’s younger character model with his older character model to give the appearance that the scene was happening in the present and two, by replacing an entirely different character with Joel’s in scenes where Joel is long dead by now. 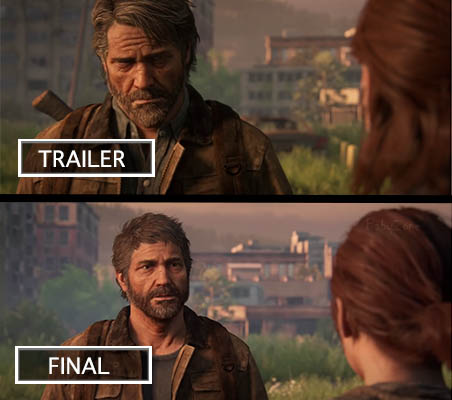 And it’s here that we begin to find ourselves in grey territory. Make no mistake, Marvel has replaced character models as well such as when they gave the appearance that the Hulk would be in Infinity War more when it was actually Bruce Banner in the HulkBuster. But there’s a difference between changing how a character is appearing in a scene and trying to create the illusion that a character is alive when they are not. And, as an audience, we should be questioning this because then it becomes an issue of when will this type of visual manipulation go too far? At what point do we draw the line? 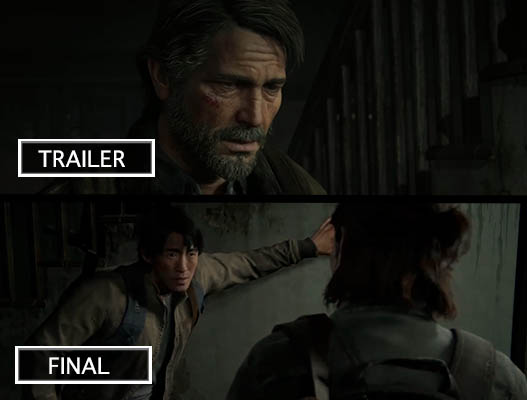 *Note: While the above image doesn’t appear to be the same setting at first, you can tell from the staircase in the background and lighting that this is, in fact, the same scene with just the model and shot size changed.

For all intensive purposes people who did not look at the spoilers and leaks regarding The Last of Us Part II thought they were buying a game that focuses on Joel and Ellie as Ellie attempts to seek revenge. And that’s not what the game is. It’s a game where Ellie seeks revenge for Joel’s murder. There’s also what the trailers omit altogether: no recent trailer of the game shows audiences that they will be playing as Abby in the second half of gameplay.

There is one more piece of media that we have to bring into the conversation, if only to be fair to The Last of Us Part II. And that is Metal Gear Solid II. In the 2001 E3 trailer, there’s gameplay footage where Solid Snake is battling a character named Fortune. However, when you play the game, you come to discover that this is actually Raiden, a soldier that was replicated to be on par with Solid Snake and that he is the main character of this game. Similar to The Last of Us II, when this news came to light, many fans were understandably angry.

However, one could argue that Metal Gear Solid II‘s use of manipulation plays heavily into the overall theme of the game which centers around technology and how control and access to digital information can be used to purposely mislead others and ultimately overpower them. Hideo Kojima misled audiences, yes, but he is the one in control, he overpowers us and manipulated the facts so we would think a certain way. Because of all intensive purposes, Raiden is Solid Snake, he’s just not the Solid Snake we expected him to be.

In contrast, keeping Abby’s role in the game and the time of Joel’s death hidden from the audience doesn’t support The Last of Us Part II‘s overall theme which highlights the cycle of vengeance and how to stop it. One could argue the developers don’t want you to know what’s coming so you are able to empathize with Abby and forgive her. But once Joel’s death happens, it’s fairly obvious where the game is headed since, by that point, players have played with Abby for a brief moment already. There’s no point to keep these narrative elements hidden because they all occur within the first hour of the game whereas Raiden’s past is a gradual reveal throughout the course of the story.

With all these facts in The Last of Us Part II concealed from the consumer entirely and no real point to it other than to capitalize on the shock value, is this false advertising? If it isn’t at what point do we hold media companies accountable? Keep in mind, if you wanted this game right when it dropped, you were expected to spend $60 USD for the standard edition.

These are by no means easy questions to answer but as Hollywood and big media become more and more desperate to grab our attention and wallets, it’s important to keep these aspects in mind when consuming media. Otherwise, these companies will try run rampant even more than they already are.